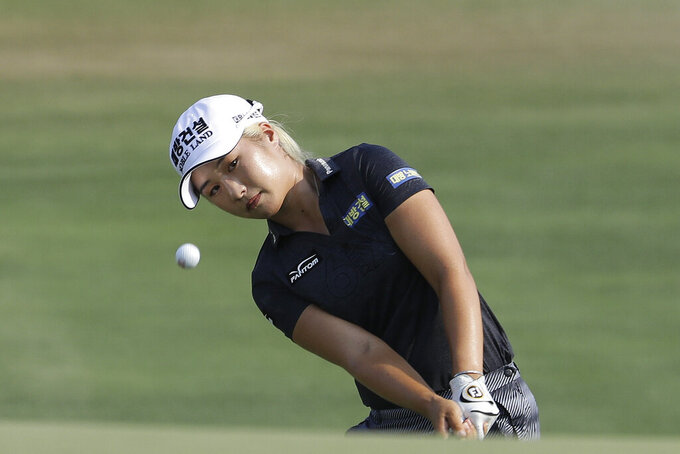 FILE - In this June 2, 2019, file photo, Jeongeun Lee6, of South Korea, chips to the 16th green during the final round of the U.S. Women's Open golf tournament, in Charleston, S.C. Without qualifying this year because of the COVID-19 pandemic, the USGA released exemption categories for this year’s Women’s Open on Dec. 10-13 in Houston.(AP Photo/Steve Helber, File)

The USGA is leaning more on the world ranking for pros and amateurs, along with current money lists on American tours, to create a U.S. Women's Open field that will not have qualifying because of the COVID-19 pandemic.

The exemption categories announced Wednesday were designed to reflect a typical U.S. Women's Open field, and 100 women already are exempt for the 156-player field Dec. 10-13 at Champions Golf Club in Houston.

Missing from the list are former Women's Open champion Cristie Kerr and two-time major champion Stacy Lewis, though both have opportunities through the LPGA Tour money list and four other tournaments when the tour resumes.

The exemption categories are similar to how the USGA created a 144-man field for the U.S. Open in September.

The USGA expanded the women's world ranking from the top 50 to the top 75, using the March 16 ranking, the last one available before the pandemic shut down golf worldwide.

The LPGA Tour is not expected to resume until the end of July at Inverness in Ohio. The Korean LPGA Tour began a few weeks ago, while the Ladies European Tour is due to resume in the middle of August.

By expanding to the top 75, former NCAA champion and Augusta National Women's Amateur winner Jennifer Kupcho secured a spot in the field at No. 51.

The top 30 on the LPGA Tour's Race to CME Globe from last year are exempt, just like last year. New for this Open are spots for the leading 10 players from this year's LPGA money list who are not already exempt on Nov. 11. Currently, Kerr would be second on that list. It also will take the top five players from the Symetra Tour money list on Nov. 11.

The USGA is providing as many as nine spots from four LPGA tournaments. It will take two players (not already exempt) from the top 10 at the Walmart NW Arkansas Championship, the Cambria Portland Classic and the Shoprite Classic. It will take the leading three from the KPMG Women's PGA Championship at Aronimink.

The U.S. Women's Open has averaged 25 amateurs a year. That led the USGA to take the top 20 from the women's world amateur ranking on Nov. 4, provided they are among the top 100.

The USGA took the leading players from last year's money lists on the Ladies European Tour, Japan LPGA, Korea LPGA and the China LPGA. Those players from Japan and Korea already were exempt through other categories.

With 100 players already exempt, as many as 54 spots are still available. The U.S. Women's Open will base a reserve list from the Nov. 9 world ranking to fill the field.

The Women's Open was originally scheduled for the first week in June before the pandemic. Now it will precede the LPGA Tour finale at the CME Group Tour Championship in Florida. Both courses at Champions Golf Club in Houston will be used for the opening two rounds, which allows for the 156-player field that late in the year.