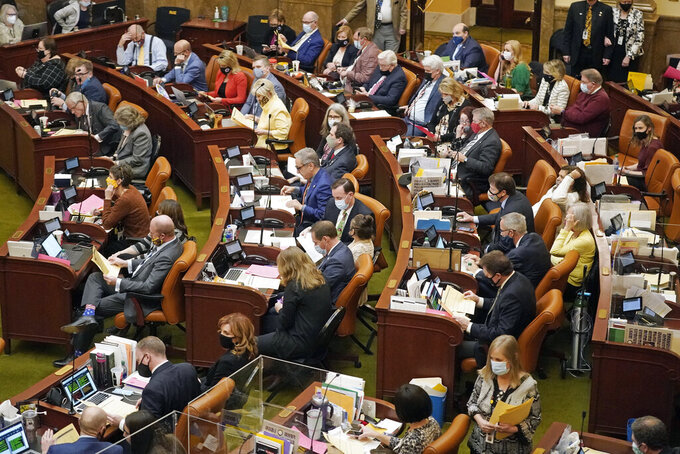 Supporters and critics alike are now waiting to find out if new Gov. Spencer Cox, a Republican, will sign or veto a proposa l that the GOP-controlled Legislature passed this month.

Cox hasn’t indicated publicly which way he’s leaning. His spokeswoman, Jennifer Napier-Pearce, said only in an email that Cox “will carefully consider this bill during the bill signing period.” He has until March 25 to decide.

Supporters argue the restriction is a critical step to help parents keep explicit content away from kids — especially as more children have their own electronic devices and have been forced to spend more time online during the pandemic.

Utah’s generally conservative culture means racy mainstream magazines and lingerie catalogs can be considered risqué. Leaders of the predominant Church of Jesus Christ of Latter-day Saints faith have also drawn attention to what they consider the harms of pornography.

Even if Cox signs the measure, it wouldn’t go into effect unless five other states also enacted similar laws, a provision added after manufacturers and retailers voiced concerns that it would be difficult to implement the filters for a single state.

The National Center on Sexual Exploitation, an anti-porn group, cheered the bill, saying that while many electronic devices come with filters installed, turning them on can be challenging for parents.

“Utah has passed a critical, common sense solution to help protect vulnerable children from accessing harmful pornographic content on phones and tablets,” Executive Director Dawn Hawkins said in a statement. Adults would be able to turn off the filters if they chose.

Research has raised questions about how pornography shapes kids’ attitudes about sex, and content filters can be an important tool in keeping children from being exposed before it’s healthy, said Emily Rothman, a Boston University professor who has studied the issue.

Moves to expand sex education face long odds in Utah, and this year a bill that would have required more discussion about consent in sexual encounters died at the state Legislature.

“A child that wants to find it and tries to would probably be able to still. It’s just one step in the right direction,” she said.

She contends the measure passes constitutional muster because adults can deactivate the filters, but experts said it still raises several legal concerns.

The bill as written could apply to any device “activated” in Utah, raising the possibility that it could require location tracking to activate filters on the phones of anyone coming into the state, Jain said.

The U.S. does allow for some explicit materials to be restricted from minors, but it’s a fine distinction that can require the courts to define, Greene said.

And he said no existing filters are that sophisticated: “It’s not like you put a judge in your phone,” he said.

The filters in the marketplace have also been known to block other types of content, such as nude art works, educational information and facts about sex and sexuality, said Mike Stabile, a spokesman for the Free Speech Coalition, an adult-entertainment trade group.

The American Civil Liberties Union of Utah said the bill is an overreach that imposes the same standards on everyone.

“Parental filters already exist,” said attorney Jason Groth, “and every Utah parent can decide the level of access for their children.”