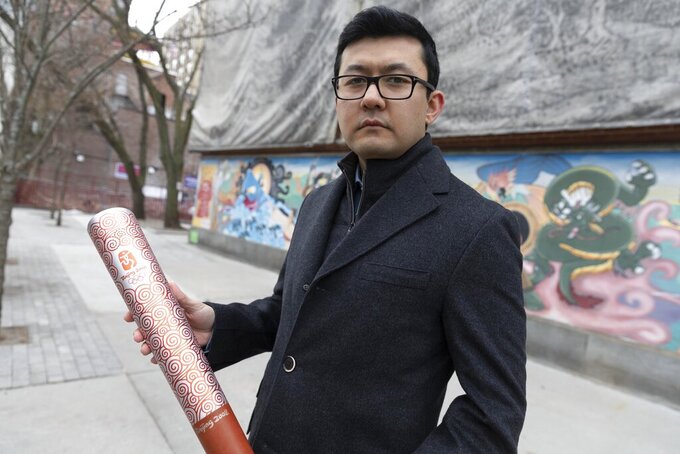 Kamaltürk Yalqun holds the aluminium Olympics torch he carried at the 2008 Beijing Olympic Games at the age of 17, on Friday, Jan. 28, 2022, in Boston. The decade after the Games saw Beijing impose policies on his region of Xinjiang that split apart his family and Uyghur community. Today, he is an activist in the United States calling for a boycott of the 2022 Winter Games, which will see the Olympic flame returned to Beijing. (AP Photo/Michael Dwyer)

TAIPEI, Taiwan (AP) — At the age of 17, Kamaltürk Yalqun was one of several students chosen to help carry the Olympic flame ahead of the 2008 Summer Games in Beijing.

Today, he is an activist in the United States calling for a boycott of the upcoming Winter Games over China's treatment of his Uyghur ethnic community.

“It seems to me that our sense of global citizenship and sportsmanship is not moving forward with these Olympic Games anymore,” Yalqun said in a phone interview from Boston, where he now lives in exile.

In the years since he took part in the Olympic torch relay and later attended the Games as a representative of his home region of Xinjiang, in western China, Beijing has imposed harsh policies on the Muslim Uyghurs, splitting apart Yalqun's own family.

With the Olympic flame set to return to Beijing with Friday's opening ceremony, these Games are attracting renewed global controversy as they spotlight the host country's treatment of the Uyghurs and other ethnic minorities. According to researchers, authorities have locked up an estimated 1 million or more members of minority ethnic groups in mass internment camps over the past several years — most of them Uyghurs.

Human rights groups have dubbed these the “Genocide Games,” and the U.S. and other countries have cited rights abuses in leading a diplomatic boycott of the event.

China denies any human rights abuses, calling them the “lie of the century.” It describes its policies in Xinjiang as a “training program” to combat terrorism.

Yalqun recalls being proud to participate in China's first Olympics. Those feelings vanished after his father disappeared. In 2016, Yalqun Rozi, an editor of books on Uyghur literature, was arrested and sentenced to 15 years in prison for attempting to “subvert” the Chinese state.

Yalqun never saw his father again — only catching a glimpse of him in a Xinjiang documentary by state broadcaster CGTN five years later. Yalqun moved to the U.S. for graduate school in 2014 and has stayed ever since.

In the past months, Yalqun has regularly joined protests in Boston calling for the boycott of the Winter Games.

In the run up to the 2008 Summer Games — the first ever held in China — Tibetan activists had demonstrated against Beijing's oppression of their community.

Yalqun says he didn’t know anything about that at the time. All he knew, as a high school student who didn't pay attention to politics, was he had a chance to go to the capital and see the Olympics as part of a youth camp.

Xinjiang education officials picked the top students from a handful of schools, who were then interviewed by the Communist Youth League regional chapter for their interpersonal and English skills. When he got a phone call saying he had been selected, Yalqun was elated.

“Whether you were a volunteer, or a torchbearer, or whether you were just attending as an audience (member), everyone was so proud of themselves for being able to be part of the Games," he said.

An Olympics committee in Beijing later selected Yalqun to be a torchbearer as well.

The morning of the run was on a hot July day and went by “in a blink,” he said. He and others ran a section that started at the eastern end of the Great Wall on the coast in the city of Qinhuangdao.

Each runner was given a red, aluminum torch, decorated with a repeating cloud motif. An inner chamber with propane allowed them to catch the flame from the previous bearer.

He got to keep the tall aluminum torch as a souvenir. On the bus to Beijing, he was besieged by curious fellow passengers who asked for a photo. Everyone was caught up in the excitement, he said.

The torch and torchbearer uniform helped smooth things over when the police came to his hotel that night to check on him. Police regularly conducted checks on Uyghur travelers in big cities.

His days in Beijing passed quickly. He was one of 70 youths selected to represent China at an Olympic Youth Camp. He made friends with students from other countries as the 400-plus group went on tours of historic sites like the Forbidden City and newly built shopping malls.

The 2008 Games were China’s coming-out party. The country had grown at a rapid pace and become wealthier. Wide boulevards once choked with bicycles were now jammed with cars.

The tall skyscrapers and wide streets were not the things that impressed Yalqun, but the trees.

“Back then, China didn’t pay much attention to the environment. Everywhere it was just concrete and cement, no nature,” he said. But he was struck when he saw the green corridor, filled with rows of trees, from the newly built international airport to the city. “I could see greenery everywhere.”

These days, Yalqun wants little to do with his home country.

The Olympic flame, which is meant to transmit a message of peace and friendship, has been doused for him. He is disappointed with the current diplomatic boycott, even as it has grown to include Australia, Canada and the U.K. He says there should be a full boycott, including by the athletes.

Many heads of state and senior global figures, including U.N. Secretary-General António Guterres and Russian President Vladimir Putin, are expected to attend Friday's opening ceremonies, according to China's Foreign Ministry.

“It should be a collective responsibility when such kind of atrocities are happening,” he said. “It’s heartbreaking for me to see such a cold response from people.”