Vaccinated for virus, Jimmy Carter and wife back in church 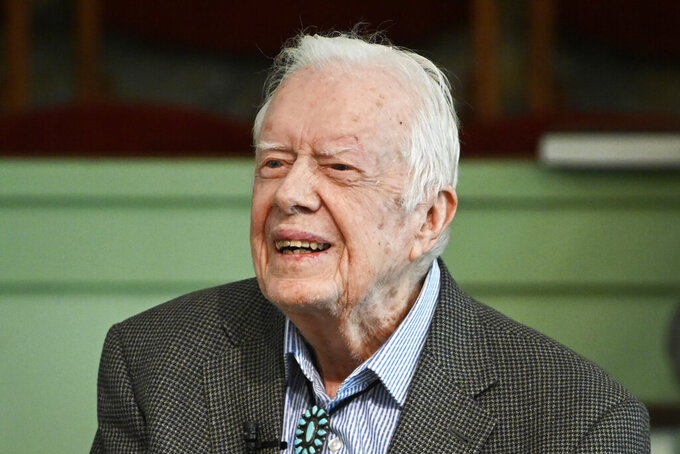 FILE - In this Nov. 3, 2019, file photo, former President Jimmy Carter teaches Sunday school at Maranatha Baptist Church in Plains, Ga. Nearly a year into the pandemic, Carter and his wife have returned to one of their favorite things: church. Maranatha Baptist Church in tiny Plains, Ga., announced on its Facebook page Wednesday, Feb. 24, 2021, that the 96-year-old Carter and Rosalynn Carter are again attending worship in person. (AP Photo/John Amis, File)

PLAINS, Ga. (AP) — Now that former President Jimmy Carter and his wife are vaccinated against COVID-19, they have returned to one of their favorite things: church.

Maranatha Baptist Church in tiny Plains, Georgia, announced on its Facebook page Wednesday that Carter, 96, and Rosalynn Carter, 93, were again attending worship in person. The couple has been in the sanctuary the last two Sundays, Pastor Tony Lowden said in a video.

Jimmy Carter hasn’t resumed teaching his Sunday school class, which once drew thousands of visitors annually. But video from last Sunday’s service showed both of the Carters sitting in their customary spots on the front pew and wearing face masks. The former president waved as members applauded their presence.

“They’ve both had their shots," Lowden said from the pulpit. In a reminder to keep a safe distance from the couple, Lowden said if someone gets tackled by him, another man or Secret Service agents, “it's because we're still practicing social distancing.”

With the Carters once again in church, Maranatha Baptist posted rules that also include mandatory face masks and temperature checks; limited building capacity; reservations and no photographs. Before the pandemic, visitors usually gathered around the couple for pictures at the end of worship.

The Carters celebrated their 74th wedding anniversary last July and are the longest-married presidential couple in U.S. history.