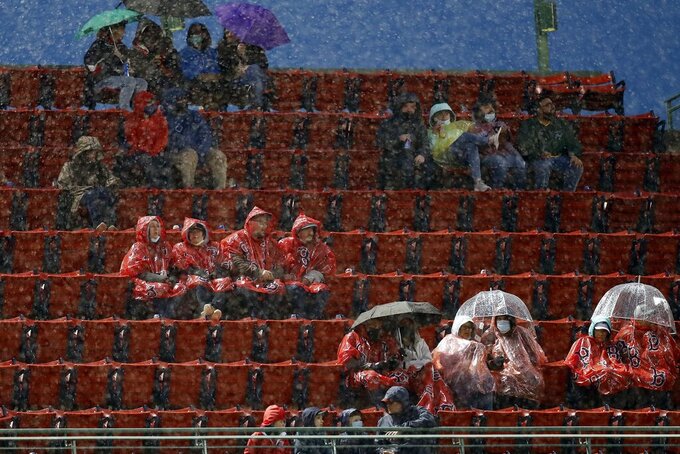 Fans sit in the rain during the third inning of a baseball game between the Boston Red Sox and the Miami Marlins, Friday, May 28, 2021, in Boston. (AP Photo/Michael Dwyer)

BOSTON (AP) — Alex Verdugo hit a three-run homer in the fifth inning, J.D. Martinez drove in two runs with a double and the Boston Red Sox beat the Miami Marlins 5-2 Friday night in a game that was called after 5 1/2 innings because of rain.

A drizzle at the onset grew into a downpour, with puddles forming throughout the infield despite the grounds crew's efforts.

“As players we knew. We saw the field. We were out there. We knew that there was no way we were going to keep going with this game. It just was getting dangerous,” Verdugo said.

With a delay clearly on the way, Verdugo said the Red Sox wanted to be the ones who broke the tie — just in case the game couldn't continue in those conditions.

"I don’t know how the infielders were actually able to throw the ball, either. It felt like every ball I would get was just waterlogged," Verdugo said. “I was kind of lucky I was in the outfield. The infield started getting muddy and pretty bad.”

Adam Ottavino slogged through a soggy top of the sixth before umpires suspended play. After a delay of 1 hour, 25 minutes, the game was called, with Ottavino awarded his second save.

It was the second straight game the Red Sox have had to sit through a delay. Boston’s home game Wednesday night against Atlanta was also interrupted because of rain, and the delay lasted almost three hours before the Red Sox finished off a 9-5 win over the Atlanta Braves early Thursday.

With the weekend series the only visit to Boston for the Marlins this season, the clubs tried to squeeze in the opener despite the ominous forecast for Friday night and another Saturday that wasn’t any better.

Martín Pérez (3-2) pitched five innings and got the win, holding Miami to two runs on five hits and struck out four.

“Every pitch was hard in these conditions to throw the ball,” Pérez said.

Jorge Alfaro hit a two-run homer for the Marlins in the second. Martinez hit a two-run double to tie it in the third, then Verdugo broke the tie in the fifth with a shot that cleared the Marlins’ bullpen.

After picking up a pair of victories and one no-decision in three career starts, Poteet ended up taking his first loss despite starting strong on Friday. Poteet got Kiké Hernández looking to start the game and had four strikeouts after two innings.

“I thought he looked good early. It seemed like his command tonight was not as good as we’ve seen it,” Miami manager Don Mattingly said. “He was kind of grinding some counts, things like that. ”

The interleague series features two members of the Devers family going head-to-head. Boston third baseman Rafael Devers faced his younger cousin, José Devers, a rookie infielder with the Marlins, for the first time in their careers.

The game was the last before Massachusetts lifted COVID-19 restrictions and capacity limits. Rochelle Walensky, the director of the Centers for Disease Control and Prevention, was scheduled to throw out the ceremonial first pitch before Saturday’s game — weather permitting.

Former Boston catcher Sandy León, who played five seasons for the Red Sox and helped the club win the 2018 World Series with, received a warm welcome back from fans when the video monitors showed some highlights of his Red Sox years, then a live shot of him in the Marlins’ dugout after the first inning.

Marlins: OF Starling Marté was reinstated from the injured list after missing 34 games with a broken rib and started in center field. Marté hit a one-out double to center with one out in the first in his first at-bat since April 18. ... The Marlins also placed SS Miguel Rojas on the 10-day IL with a dislocated left index finger and optioned 1B Lewin Diaz to Triple-A Jacksonville.

Marlins: LHP Trevor Rogers (6-2, 1.75 ERA) leads Miami in victories. Rogers held Philadelphia to one run over five innings Monday but did not figure in the decision of the Marlins’ 9-6 win.

Red Sox: RHP Nathan Eovaldi (5-2, 4.39) returns for his first start since his streak of 68 straight innings without a homer ended when the Phillies’ Rhys Hoskins went deep last Saturday in Philadelphia.