Vermont governor urges people not to be used as 'pawns' 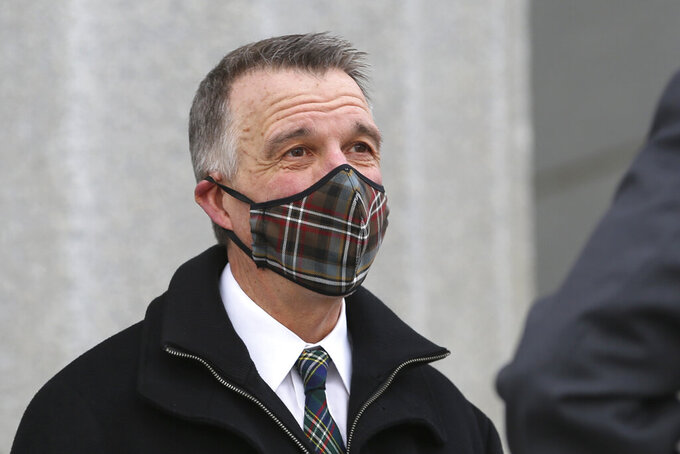 Vermont Gov. Phil Scott stands on the steps of the Vermont Statehouse during a ceremony where he took the Oath of Office on Thursday, Jan. 7, 2021 Montpelier, Vt. Scott, a Republican, is beginning his third two-year term. (AP Photo/Wilson Ring)

Gov. Phil Scott on Tuesday urged Vermonters who are considering joining protests in the run-up to the inauguration of President-elect Joe Biden not to be used as “pawns” by extremists who are trying to undermine democracy and overthrow the government.

The Republican governor, speaking at one of his regular news briefings, said he and the state's law enforcement community are aware that extremists have called for armed protests in all 50 state capitals this Sunday and on Jan. 20, inauguration day.

But he said they were not aware of any specific threats in Vermont.

Scott said it is anyone's First Amendment right to protest to make their feelings known.

But "don't be used as a pawn by some of these extreme groups that are planning these protests throughout our nation to undermine our democracy, to overthrow the government,” he said.

Scott said the people who are planning the protests are using people, just as they used people last week when an insurrectionist mob overran the Capitol in Washington.

“They used them in Washington, and they’ll use them in the next few days,” Scott said.

Vermont Public Safety Commissioner Michael Schirling reiterated that officials knew of the general threat, but that the law enforcement community is unaware of any specific threat against Vermont.

Schirling said state law enforcement officials have been in contact with their federal counterparts. He wouldn't be specific about any response plans.

“There are those who demonstrated last week their intent on insurrection, and we don’t want as Vermonters to fall into a trap of coming and inadvertently supporting that," Schirling said.

“While we don’t script where and when folks should exercise their First Amendment rights, we would ask that people think twice about whether these two days that have been identified, the 17th and the 20th, are the times to do that,” he said.

Separately Tuesday, the chair of the Vermont Republican Party cautioned anyone against attending an event on Sunday in Montpelier, especially if they would attend while armed.

“While (Vermont) holds a proud tradition of a right to bear arms, doing so at this rally in our current climate in light of what happened last week would demonstrate an incredible lapse of judgement,” GOP Chair Deb Billado said in a Tuesday statement.

U.S. Rep. Peter Welch, a Democrat, has tested negative for the coronavirus and is planning to return to Washington so he can participate in the debate about impeaching President Donald Trump, his spokesperson said Tuesday.

Welch had been “taking extreme caution” in Vermont after his possible exposure to the virus while he was in a secure location during last week's attack on the U.S. Capitol.

The congressman was wearing a mask while in the secure location and had no contact with any of the members who were not wearing masks or the representative who later tested positive for the virus, Welch spokesperson Lincoln Peek said Monday.

“The Office of the House Attending Physician has advised him that it is safe for him to return to Washington to participate in person during House floor activity, including the impeachment debate and vote,” Peek said Tuesday morning in an email. “He will be returning to Washington this afternoon.”