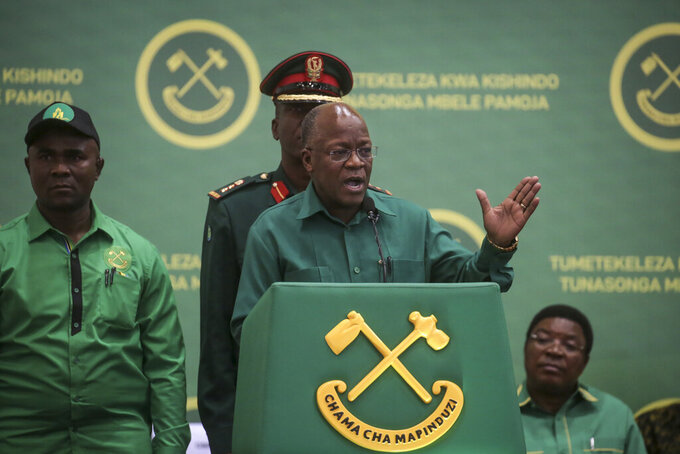 FILE - In this July 11, 2020 file photo, Tanzania's President John Magufuli speaks at the national congress of his ruling Chama cha Mapinduzi (CCM) party in Dodoma, Tanzania. Opposition politicians on Wednesday March 10 2021, are raising questions about the health of Tanzania's COVID-19-denying president John Magufuli, as he has not been seen in public for more than a week and there has been no responce to questions from The Associated Press about Magufuli’s health and whereabouts. (AP Photo, File)

NAIROBI, Kenya (AP) — As Tanzania's president has not been seen in public for more than two weeks, the East African country's vice president on Monday sought to reassure the nation, saying it was “normal” for human beings to suffer colds and other illnesses.

Addressing a public rally in Tanzania's Tanga region, Samia Suluhu offered no update on the health or whereabouts of President John Magufuli even as she said she had been sent by him to calm the East African nation.

“I want to assure you Tanzania is safe. It is normal for a human being to be tested, often for colds and flu, for anything," Suluhu said. “I want to tell you that if there is an important time for Tanzanians to remain united, it is now. It is not the time to listen to information from outside the country which will confuse or divide us. Let all unite as Tanzanians and continue working to build this country.”

Her comments deepen the mystery surrounding the health of Magufuli, a populist leader who is often seen in public and makes frequent appearances on the state broadcaster. But his last public appearance was on Feb. 27 at the swearing-in ceremony of his chief of staff in the commercial capital of Dar es Salaam.

While Magufuli has not been seen in public, speculation has swirled over his health status as some, including his main rival, assert that he is suffering from COVID-19 and hiding it.

Magufuli is one of Africa’s most prominent COVID-19 skeptics. Last year he said the disease had been eradicated from Tanzania by three days of national prayer. He mocked COVID-19 tests, discouraged Tanzanians from wearing masks, and expressed doubts on the efficacy of vaccines.

But last month Magufuli acknowledged his country had a coronavirus problem amid reports of a rising number of deaths related to breathing problems and days after the death of the vice president of the semi-autonomous island region of Zanzibar, whose political party had earlier said he had COVID-19.

Last week Tanzania's prime minister insisted Magufuli was well and busy with his duties. That explanation did little to calm anxiety.

Police over the weekend began arresting people discussing Magufuli’s health on social media and other forums. It’s not clear what those arrested will be charged with. Police confirmed they had arrested at least one man on Saturday.

Opposition leader Tundu Lissu, who has openly questioned Magufuli's absence in many Twitter posts, alleged three others had been arrested by Monday, including a 73-year-old man in a desperate bid by the government to stop the public from asking questions about the president's health.

Lissu is able to freely comment on the president's health because he lives in Belgium.