With a video filmed in secret, Trump keeps sowing chaos 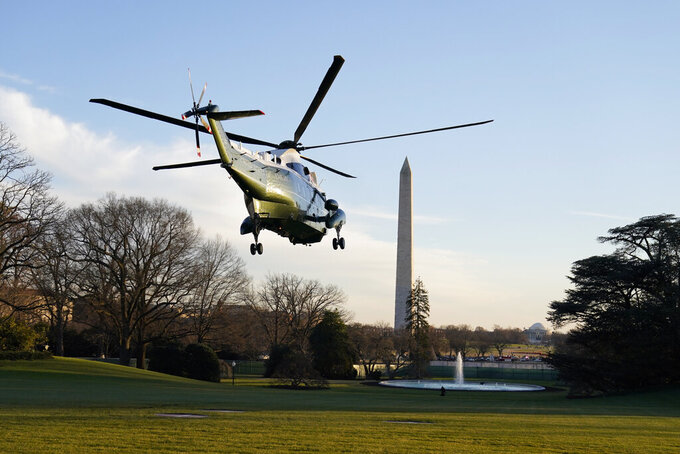 Marine One, with President Donald Trump and first lady Melania Trump aboard, lifts off the South Lawn of the White House, Wednesday, Dec. 23, 2020, in Washington, enroute to Andrews Air Force Base and then onto Florida. (AP Photo/Evan Vucci)

WASHINGTON (AP) — The video message that plunged Washington into chaos was filmed in secret.

President Donald Trump stood in the White House's Diplomatic Reception Room, holiday garland and gleaming ornaments draped on the fireplace behind him. He spoke into the camera not to deliver warm Christmas wishes, but to threaten to detonate Congress’ $900 billion COVID-19 relief and year-end package.

The video was released without warning Tuesday night, its recording orchestrated by White House chief of staff Mark Meadows and kept from all but a handful of aides. On Wednesday, few Republicans or even White House staffers knew what Trump plans next, in a return to the around-the-clock chaos of his first months in office.

The moment was also a flashback to the start of Trump's political career, when he delivered direct assaults on GOP leadership and the party’s establishment. Now Trump appears willing to do that again on his way out of office, potentially sabotaging his party’s chances of controlling the Senate as he lashes out in anger at those he believes have not supported his efforts to overturn the election.

Since his defeat by Democrat Joe Biden, Trump has been holed up in the White House with an ever-shrinking circle of aides and allies, including some pushing fraudulent conspiracy theories about the election. He has ignored the surging pandemic that is killing 3,000 Americans a day, and has mostly left it to others to promote vaccines being counted on to bring it to an end.

His focus has largely been on trying to overturn Biden's victory, embracing baseless conspiracy theories, pushing futile legal challenges and undermining confidence in the tenets of American democracy and the peaceful transfer of power.

The president, who has not held a public event in 10 days, departed Wednesday afternoon for more than a week at Mar-a-Lago, his coastal Florida estate. Up until the president's departure, aides were unsure whether he would cancel the trip, adding uncertainty to a fatigued, hollowed-out West Wing featuring scores of empty desks as staffers begin leaving for new jobs.

“There are mixed signals from the White House leaving more confusion than calm,” Biden noted on Wednesday.

Confusion was the watchword Tuesday night when Trump released two videos, one falsely declaring that he won the election in a “landslide” and the other calling on lawmakers to increase direct payments for most Americans from $600 to $2,000 for individuals and $4,000 for couples, a boost most Republicans strongly oppose.

The payments are included in sweeping legislation passed by Congress earlier this week. Trump personally played little role in the negotiations, though the White House had initially sent signals that he would sign the bill.

The president's focus has remained on the election and he has grown increasingly frustrated with Republicans who are acknowledging Biden's victory. He also complained to allies in recent days that Vice President Mike Pence, who has spent four years demonstrating his loyalty, was not doing enough to defend him. And he said he was pleased by the departure of Attorney General William Barr, who had not supported his calls for a special counsel to look into election fraud.

Trump has been buoyed by support from some House Republicans who are entertaining options for snarling congressional certification of Biden's victory in early January. Any such effort would be futile in blocking Biden, but would likely deepen the disinformation campaign Trump and his allies have launched since Election Day to undercut the incoming president's legitimacy.

Whether Trump is threatening to hold up the relief bill simply to spite Republicans is unclear. But the timing of his declarations is particularly problematic for the party, given the upcoming Senate runoffs in Georgia, which will determine whether Republicans can keep control of the chamber.

There are also personal political considerations at play for Trump. Aides believed that fighting to put more money in the hands of average Americans could boost his popularity and populist credentials for whatever his potential next move might be, including a possible presidential run in 2024.

Some of his aides have already begun planning for a post-presidency with Trump in Florida, where the outgoing chief executive is expected to reside after he leaves office. Trump is expected to remain highly visible after leaving office and may launch political and media endeavors even if he holds off on announcing another possible campaign.

But now sequestered in near-isolation in the White House, Trump has paid attention to attorneys Rudy Giuliani and Sidney Powell, both promoting election conspiracy theories, and listened to his former national security adviser Michael Flynn’s push to declare martial law. Yet he rebuked aides who urged him to denounce Russia for likely perpetrating a vast hack directed at the computer systems of U.S. government agencies.

Adding to the tumult, Trump on Wednesday vetoed the annual defense policy bill, following through on threats against a measure that has broad bipartisan support in Congress. It potentially sets up the first override vote of his presidency.

And while Trump has disengaged from the pandemic, he did use the powers of the office when he pardoned 15 people, including a pair of congressional Republicans who were strong early supporters, a 2016 campaign official ensnared in the Russia probe, and former government contractors convicted in a 2007 massacre in Baghdad. And within minutes of Air Force One lifting off for Florida, Trump sent out a warning tweet to Iran after a recent series of rocket attacks in Iraq by Iranian-backed militias.