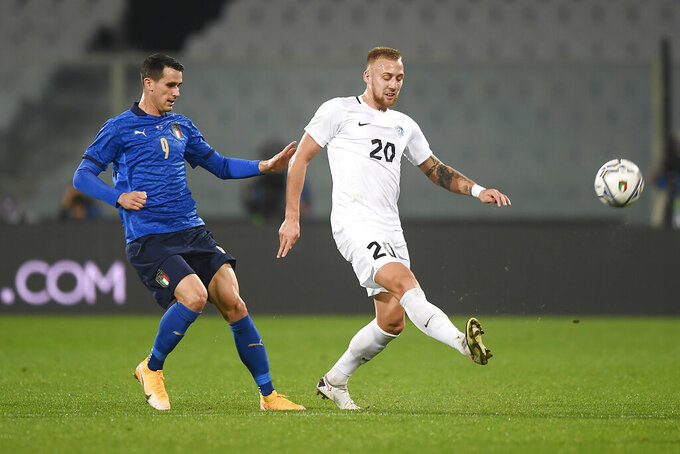 FLORENCE, Itlay (AP) — Vincenzo Grifo scored his first two goals for Italy in a 4-0 win over Estonia in a friendly on Wednesday as the host won comfortably despite missing a number of players and its coach because of coronavirus infections.

Federico Bernardeschi also scored in the first half, while Riccardo Orsolini converted a penalty four minutes from time.

Italy was without coach Roberto Mancini and several players because of the coronavirus. Players from six clubs — Fiorentina, Genoa, Inter Milan, Lazio, Roma and Sassuolo — were self-isolating because of COVID-19 cases in their squads. They will join the rest of the Azzurri squad when allowed to do so by their local health authorities.

That was why Mancini named an enlarged squad of 41 players. Mancini himself was self-isolating in his home in Rome after testing positive for the virus on Friday and was replaced by assistant coach Alberigo Evani.

After the friendly against Estonia, Italy then plays its final two UEFA Nations League group matches at home against Poland on Sunday and at Bosnia-Herzegovina three days later