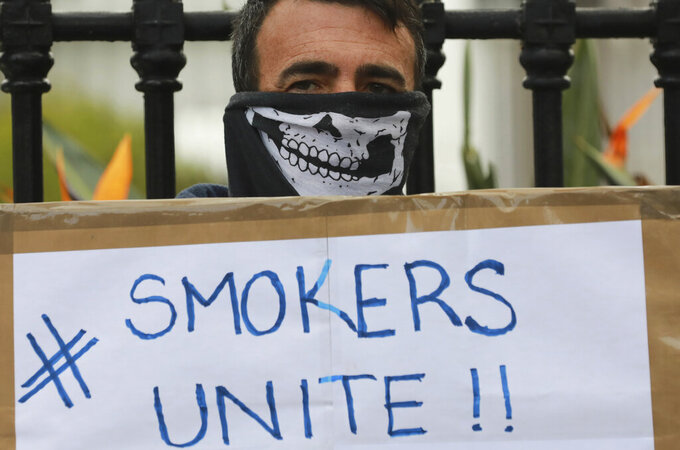 FILE — In this June 2, 2020 file photo, a demonstrator holds a placard during a protest against the tobacco ban outside parliament in Cape Town, South Africa. South Africa is three months into a ban on the sale of cigarettes and other tobacco products, an unusual tactic employed by a government to protect the health of its citizens during the coronavirus pandemic. The country is one of just a few around the world to have banned tobacco sales during the pandemic and the only one to still have it in place. (AP Photo/Nardus Engelbrecht/File)

CAPE TOWN, South Africa (AP) — The message was dropped into a WhatsApp group used by suburban moms in South Africa. Amid the grumblings over homeschooling during lockdown, one mom went off topic: “Does anyone know where to get illegal cigarettes? I just need a few. I'm desperate.”

She emphasized her anguish with an emoji, a face with eyes bulging and tongue hanging out.

The “desperate mama,” as she described herself, is one of 9 million smokers in South Africa affected by the government's decision in late March to ban the sale of all tobacco products, ostensibly to help protect citizens' health during the coronavirus pandemic. The ban remains even after South Africa eased most of its strict lockdown restrictions, including another contentious outlawing of alcohol sales.

Confirmed COVID-19 cases are rising rapidly in Africa’s most developed economy. But that economy is suffering, and now restaurants, cinemas and even casinos are set to reopen. And allowing people to purchase alcohol again has led to an increase in drunken brawls and traffic accidents, putting added strain on hospitals as they deal with the virus. Yet it's still illegal to buy a pack of cigarettes.

“It makes no sense,” said Sinenhlanhla Mnguni, chairman of the Fair Trade Independent Tobacco Association, which represents smaller manufacturers. The association challenged the ban in court and lost. Another case, with global industry giant British American Tobacco taking the government to court, has begun.

South Africa is the only country in the world to have a ban on tobacco sales in place after India and Botswana lifted theirs.

The government says it's putting the health of its people first as the respiratory disease spreads. The World Health Organization advises people to give up smoking during the pandemic and says smoking is linked to a higher risk of severe illness and death from COVID-19 in hospitalized patients, although it was unable to specify exactly how much greater those risks might be. But in the scientific brief published this week, the U.N. health agency also said there were currently no studies to show if smokers were more susceptible to actually contracting COVID-19.

The South African government has been hotly criticized for not publishing the science it said it relied on three months ago.

That showed a “Just do what we say, we know best” attitude from the government, said Joleen Steyn Kotze, an expert on democracy and governance in South Africa. She warned the lack of transparency might foster a general distrust when the government needs citizens more than ever to cooperate.

The ban, which outlaws selling tobacco but not the act of smoking, does have some backing.

“There are good reasons for people to quit, and especially at this time of COVID-19,” said Catherine Egbe, a scientist at the Alcohol, Tobacco and Other Drugs Research Unit at the South African Medical Research Council. She agrees with the ban on the basis that COVID-19 “majorly affects the respiratory system.”

South African smokers have two options, neither pleasant: Go cold turkey at a time of high stress. Or, like the desperate mom, go criminal. With prohibition comes bootlegging, often with links to organized crime.

Removed from all mainstream outlets, cigarettes have become the most sought after illicit drug in South Africa, more profitable than cocaine and heroin, some analysts say.

Cigarettes hidden in grocery bags are pushed across the counter at corner shops. Young men flash packs on sidewalks. A nod in their direction and even one cigarette to temporarily fend off withdrawal symptoms is available.

It comes at a high price. Sometimes $11 for a box of 20 cigarettes that cost $1.70 pre-lockdown. Some brands are smuggled into the country, others are hardly-known, bottom shelf local labels, but they'll do. There's even a VIP service if you make phone contact with illicit sellers. For $350 you'll get 200 cigarettes delivered to your home, one promises, so you can avoid the risk of running into police. They normally cost about $20.

Supporters of the ban say there has been some success in getting people to quit smoking, or at least cut down. But a survey of more than 12,000 smokers by the University of Cape Town found that 90% of them bought cigarettes illegally during lockdown.

Mnguni said it was “nonsense” to think smokers would suddenly give up. He fears that smokers now familiar with bootleg sources may stick with them when the ban is lifted and illicit cigarettes are cheaper again.

The repercussions for the economy are already felt. The tobacco industry contributes nearly $100 million a month in excise taxes paid to the South African government, never mind jobs and livelihoods.

The fate of a legendary tobacco shop, a fixture on Cape Town's historic central square since 1793 and which had survived two centuries of challenges, has reinforced the new reality. Unable to trade for months, it packed up and moved out, its future uncertain.

Economist Mike Schussler knew it was always going to be hard for South Africa's economy, which was in recession before the pandemic.

“But we could have made it a little easier by not banning things like cigarettes and liquor,” he said.