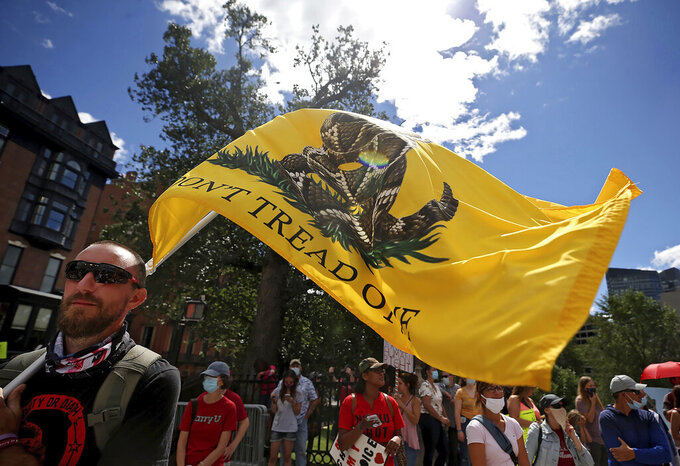 Sean Courtney, of West Springfield, holds a "Don't Tread on Me," flag during a protest against mandatory flu vaccinations, outside the Massachusetts State House, Sunday, Aug. 30, 2020, in Boston. Public health authorities say flu shots are very important this year to avoid overburdening the health system. amid the coronavirus pandemic. (Nancy Lane/Boston Herald via AP)

RUTLAND, Vt. (AP) — Some Vermont educators are wondering if remote learning could mean the end of snow days, the unexpected days off when weather conditions make it too hard for staff and children to reach school.

Bryan Olkowski, the superintendent of the Washington Central Supervisory Union, recently floated the idea at a school board meeting.

He said he brought it up lightheartedly, but it could be possible. Many school districts are working to switch to at least part-time remote education this fall.

It’s unclear if those systems could work with less than a day’s notice.

David Younce, of the Vermont Superintendents Association, said he hasn’t heard any formal conversations on the topic, but called the idea “common sense commentary.”

“The ability to work and learn from home is going to become more and more normalized, I suspect,” Younce told the Rutland Herald. “I think that makes it much easier to make a decision.”

But he said any decisions to shift to remote learning for inclement weather should be made in advance, such as noon the day before, to provide time for teachers, students and families to plan accordingly.

Demonstrators, many not wearing masks, came to the Massachusetts State House on Sunday to oppose a new state rule that requires flu shots for school children.

Republican Gov. Charlie Baker announced what is believed to be the first such requirement in the country earlier this month. A Massachusetts Department of Public Health spokesperson released a statement on Sunday that said the flu shot requirement is especially important because flu season will overlap with the coronavirus pandemic.

“As students return to in-person learning in the classroom, this vaccine requirement provides an additional and necessary layer of protection and safety,” the statement said.

A speaker at Sunday's demonstration called on the crowd to hug one another, The Boston Globe reported.

Officials in Vermont are considering a similar requirement.

The city of Quincy, Massachusetts, fined a wedding venue on Saturday for violating limits on gatherings. The rules are intended to cut down the spread of the coronavirus

The Neighborhood Club of Quincy received a $300 fine, The Patriot Ledger reported. A spokesperson for the club said it was hosting an outdoor wedding when rain and thunder motivated the general manager to move it indoors.

Quincy Health Department Commissioner Ruth Jones said she received a call there were more than 50 people at the venue. Republican Gov. Charlie Baker issued an order in early August limiting indoor gatherings to no more than 25 in a single, enclosed space.

More than 20 College of the Holy Cross students have tested positive for the virus after a party.

A spokesperson for the college said students who hold parties will be held accountable, The Republican reported. The party was held off campus in mid-August.

Holy Cross is among dozens of New England colleges welcoming students back to school this month and next. The school is hosting a remote fall semester, but some students are living on campus.

Seventeen Providence College students have been suspended for violating the school's code of conduct about the pandemic.

Rev. Kenneth Sicard, the college's president, described the students' actions as “selfish behavior.” He added that more sanctions could be imposed by the college.

“We have emphasized strongly that actions that endanger themselves and others during this pandemic will not be tolerated at Providence College,” Sicard wrote.

There are nine active cases of COVID-19 at University of Maine System campuses, a spokesperson for the system said Sunday. All of the individuals are in isolation, the spokesman said. The cases involve students and employees.

Community transmission of the virus is still happening in every county in the state, the New Hampshire Department of Health and Human Services said Saturday.

There have been more than 7,200 reported cases of the virus in New Hampshire. That's the most of the three northern New England states. About 10% of the cases in the state have resulted in hospitalizations.