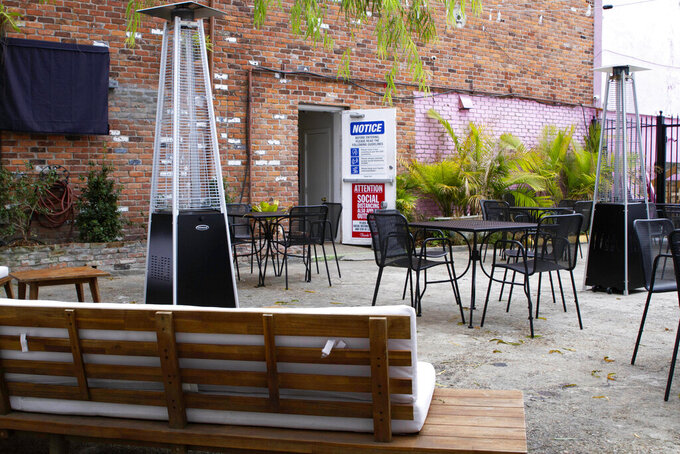 NEW ORLEANS (AP) — During last year's Carnival season, tourists at the Elysian Fields Inn gathered over breakfast to talk about parades from the night before. At NOLA Art Bar, they sipped cocktails and watched a parade go by. At Kajun's Pub, many revelers started and ended Fat Tuesday in the bar.

Not this year. COVID-19 is tamping down the joy — and the revenue — associated with Carnival season in New Orleans. Parades that normally draw thousands in the weeks before Fat Tuesday — which falls on Feb. 16 this year — have been canceled.

In this city where music, food and cultural celebrations are interlocking blocks of the hospitality industry, bars and restaurants that usually overflow with free-spending customers are closed or operating at limited capacity. Live music is all but dead.

The toll of this year’s toned-down Mardi Gras is evident on St. Claude Avenue, an off-the-beaten-track stretch that has become a destination in recent years. Many of the street's small business owners have weathered so much already that even as coronavirus vaccinations ramp up, they're prepared for a long wait before business gets back to normal.

Michelle Hagan and her husband own the nine-room inn just steps off St. Claude. Last year, one of the groups known as a krewe paraded right by the house with a procession called Chewbacchus — an homage to a “Star Wars” character. She described it as one of the best nights since the couple bought the inn.

“I was really hoping for that again this year. But obviously, that’s not happening,” she said. “It’ll be very different.”

EDITOR’S NOTE — Small businesses around the world are fighting for survival amid the economic fallout from the coronavirus pandemic. Whether they make it will affect not just local economies but the fabric of communities. Associated Press journalists tell their stories in the series “Small Business Struggles.”

It's difficult to measure the exact economic effect of a holiday that stretches from Jan. 6 and ends on a Tuesday in February or March. A Tulane University study looked at the 12-day period leading up to Fat Tuesday in 2014 and determined that Mardi Gras had a roughly $164 million direct economic impact on the New Orleans economy.

Jennifer and Matt Johnson bought what is now the Carnaval Lounge on St. Claude in summer 2019, and the 2020 Mardi Gras season was their first as business owners. The lounge was becoming popular for live music and Brazilian food.

Hundreds of people passed through on Fat Tuesday. By the time St. Patrick’s Day rolled around, the pandemic shut everything down. They still have the Guinness beer that was never served.

They cautiously reopened after Labor Day at restricted capacity and without live music. That lasted until about November, when they started to notice a renewed cautiousness in customers. So they closed yet again and likely won’t reopen until it’s clear that live music can resume.

The two are optimistic about vaccines and the passage of the Save Our Stages legislation, which aims to get money to struggling music venues. They also understand that live music will probably be one of the last things to return after the virus is fully defeated.

“I think people who didn’t realize music had an impact on their life now do,” Jennifer said.

He’s offering food — something that wasn’t originally part of the business plan. And bit by bit, he’s continued construction on a combined bookstore and coffeeshop next door that he plans to open Feb. 20. But he said there’s no rhyme or reason as to which days are good and which are bad.

Mardi Gras wasn't a huge business event for Kristopher Doll’s Shank Charcuterie. The butcher shop and restaurant opened in 2015 and was mostly frequented by locals, Doll said. But one customer — a local musician — came in each year two months ahead of Fat Tuesday to order a full prime rib rack so it could be properly aged before a big pre-Lent feast.

After a months long struggle, Doll closed his doors in November and is now looking for work. He said he was able to stay afloat until late summer, when a weekly boost in unemployment benefits ran out and business plummeted. October’s Hurricane Zeta was the last straw. The storm cut power for five days and forced him to throw out thousands of dollars in meat.

“It’s a sort of black swan set of circumstances,” he said. “I did literally everything I could think of to try to keep that place open.”

JoAnn Guidos opened Kajun’s Pub on St. Claude in 2004, closed for a few months after Hurricane Katrina hit in 2005, and then literally never closed again. The bar was open 24 hours a day, seven days a week until the pandemic.

“It’s the eeriest feeling, you know, when you stick the key in the door and lock it, because the last time that door’s been locked was two weeks after Katrina,” she said.

Guidos has been doing needed renovations while thinking about how to reopen — slowly — and talking with the restaurant owner next door about how to use the patio they share. It will take a while before things are back to normal, not just because of the virus’ unpredictability, but also because her customer base has been financially hammered by the pandemic.

Since 2012, Catherine James has owned Faubourg Wines, a high-quality wine store that prides itself on not being snooty. Before the pandemic, she employed eight people and often socialized with customers who came in for wine tastings or for $5 glasses. Now a staff of four takes orders online or at a counter set up on the street so customers don’t have to come inside.

She got a $15,000 grant under the CARES Act, which allows her to pay people if they need to stay home — for example if they think they’ve been exposed to the coronavirus. Her goal is to find a way forward.

“This shop is my only source of income, and I’ve got a young child to take care of,” she said. And her employees would be hard pressed to find other jobs if she closed.

Back at the Elysian Fields Inn, Hagan misses her regular guests. Many return each year for Mardi Gras parades or Jazz Fest, which was canceled last year and postponed this year.

She has considered closing. But she gets joy from running the business and helping people experience New Orleans.

“There have been moments where I thought, ’Oh, you know, I could just enjoy my grandson and live a normal ... life,'” she said. But then she thinks: “I want my guests to come back ... I want to keep doing this.”

Learn more about how small businesses around the world are coping with the pandemic at: https://apnews.com/hub/small-business-struggles