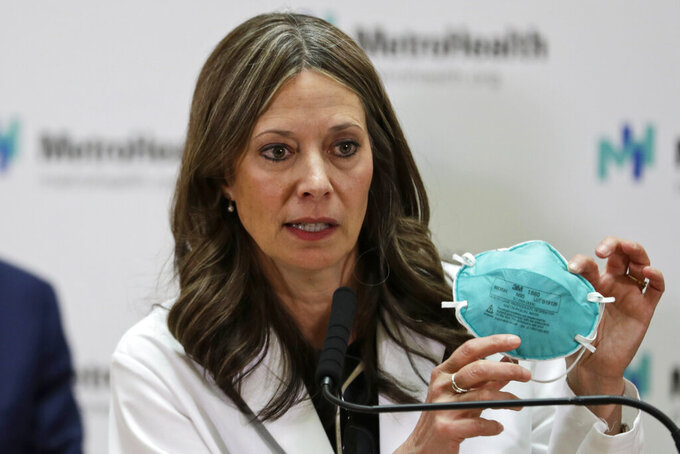 FILE - In this Feb. 27, 2020 file photo Ohio Department of Health Director Amy Acton speaks during a news conference at the MetroHealth Medical Center in Cleveland. An open Senate seat in Ohio has set off a round of jockeying among ambitious Democrats and a spirited debate over who is best poised to lead a party comeback in a one-time battleground that has been trending Republican. (AP Photo/Tony Dejak, File)

COLUMBUS, Ohio (AP) — Dr. Amy Acton, the former state health director who became the face of Ohio's early pandemic response, has stepped down from her nonprofit position to “carefully explore” running as a Democrat for the U.S. Senate, she said Thursday.

Acton would be vying for a coveted open seat being vacated by Republican U.S. Sen. Rob Portman, who cited divisive national politics in a decision not to seek reelection next year after twice comfortably winning the seat by double-digit margins.

“Many Ohioans have shared with me their concerns and the daily challenges they face,” Acton said in a statement. “They have expressed a need for a new approach that can help them, and their communities thrive. I am humbled by the outpouring of interest and support. For that reason, I am stepping down from my role at The Columbus Foundation in order to carefully consider how I can best be of service at this crucial time.”

Acton's leadership working with Republican Gov. Mike DeWine in the state’s response to the COVID-19 pandemic made her something of a folk hero and role model for Ohio girls.

She also faced intense backlash over the restrictive health orders she signed, including having armed protesters show up outside her suburban home, and resigned in June. But Democratic insiders say she polls well as a possible statewide contender.

DeWine declined to comment on her potential candidacy while taking questions Thursday after a COVID-19 response update.

Portman’s surprise announcement Jan. 25 has triggered a frenzy among potential contenders — both Democratic and Republican — for what could have been a tough race against a well-funded GOP incumbent. A dozen or so Ohio politicians have already expressed interest in the 2022 Senate race, and some Democrats are advocating for the party to field a candidate who is a person of color, a woman or both.

Some influential Democrats are urging Acton to run even as early momentum appears to be building for the candidacy of veteran U.S. Rep. Tim Ryan, who represents Ohio’s blue-collar Steel Valley. Former Democratic Gov. Ted Strickland is solidly behind Ryan and Hillary Clinton, the party's 2016 presidential nominee, has also signaled her support for him on Twitter.

Several Republican U.S. House members have also expressed interest, including Rep. Brad Wenstrup, an Iraq War veteran who represents much of Portman's old U.S. House district in southern Ohio, and Rep. Bill Johnson, who represents much of Appalachian Ohio and has already run a radio ad aimed at former Republican Gov. John Kasich, a steadfast foe of Donald Trump. Kasich has said he won't run, but Johnson warned Kasich would try to get an “elitist” elected to the seat.

Ohio Republican Party Chair Jane Timken, who ousted a Kasich loyalist for the job with Trump's help; Secretary of State Frank LaRose, a Marine veteran, and former state Treasurer Josh Mandel, who dropped a 2018 bid for Democratic U.S. Sen. Sherrod Brown's seat, are among other well-known Republicans weighing a bid.

Former Treasurer Kevin Boyce and state House Democratic leader Rep. Emilia Sykes, who both are Black, are among other potential Democratic contenders.

Acton is viewed as a potentially strong fundraiser in a race against an expected well-funded Republican candidate.

DeWine could face a primary opponent in 2022, and Mayors Nan Whaley of Dayton and John Cranley of Cincinnati are also considered likely to run for the Democratic gubernatorial nomination.

Cranley said the emerging prospect of a strong Democratic battle for the Senate seat is good news for other statewide candidates.

“I think it's extremely helpful,” Cranley said, because that “will drive Democratic resources to Ohio that will help any one of us that are on the statewide ballot.”