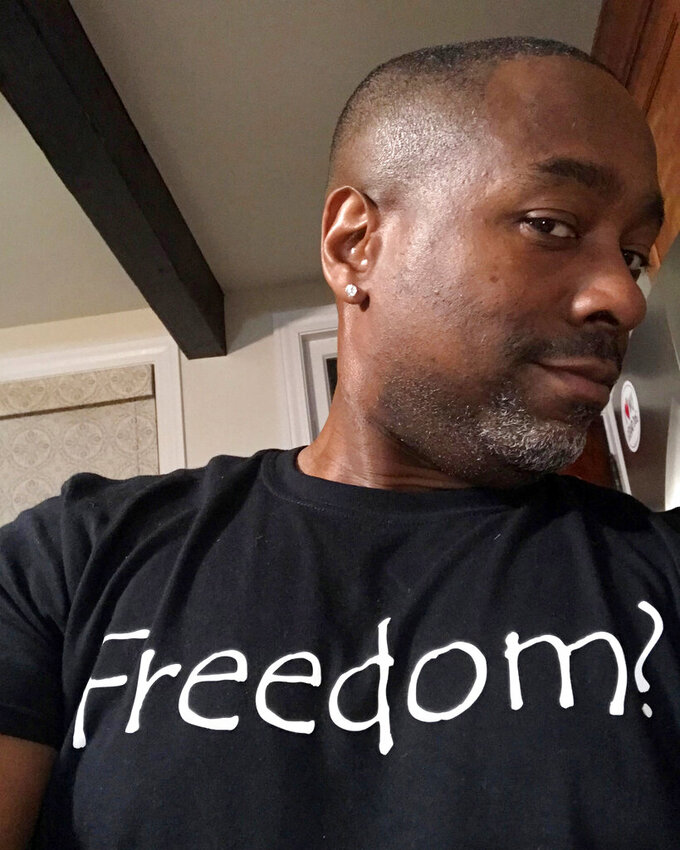 This May 2020 selfie photo provided by Terrence Nichols, 44, shows him in Chicago after a COVID-19 infection. Nichols has recovered physically from a relatively mild case of COVID-19, diagnosed in March. But as a Black man in Chicago, knowing its impact in his community has left Nichols feeling fearful, vulnerable and angry over the president’s push to reopen. (Terrence Nichols via AP)

Doctors have known it for a long time, well before the resounding cries of “Black Lives Matter”: Black people suffer disproportionately.

They face countless challenges to good health, among them food, transportation and income. The stress of living with racism has very real, physical effects. And they are especially prone to diabetes, hypertension and other chronic diseases that can be tricky to manage even in normal times.

Then came COVID-19 and George Floyd — one killing Black people in alarming numbers, the other shining a harsh light on systemic racism. In a matter of months and nearly 8 minutes, it became clear that institutions designed to ensure the two most important things in life — health and safety — had converged to turn against one segment of the population in stark, horrific ways.

It’s a brutal blow to Black people’s well-being and renewed calls for racial justice in all realms including health care. Doctors and their patients are reeling from the impact.

“We are exhausted and we are not OK,” said Dr. Patrice Harris, a psychiatrist who just ended her yearlong term as president of the American Medical Association. She was speaking not so much for herself as for her community.

Police violence is always an injustice, “but its harm is elevated amid the remarkable stress people are facing amid the COVID-19 pandemic,” Harris and AMA Trustee Dr. Jesse Ehrenfeld said in a recent online opinion article.

Floyd’s death is the most extreme example of over-policing that has long plagued Black and brown communities. It has been linked with elevated stress, high blood pressure and other chronic illness that contribute to the high virus death rates in Black people.

As their offices start reopening for regular appointments, doctors are bracing for the fallout: a wave of sicker, shell-shocked patients.

As a physician, Harris knows she has a certain privilege. But she also knows firsthand the weariness of Black lives in America.

Harris was only the second Black physician to lead the AMA in its 173-year history. She gets “those looks” when walking into stores. She’s been asked to fetch coffee while wearing scrubs and a stethoscope.

“It’s not that we don’t have any more to give,” Harris said. But there’s a feeling among many that if Floyd’s death can’t spark meaningful change for Black Americans, nothing will.

Dr. Brittani James is a primary-care doctor. Most of her patients on Chicago’s South Side are Black.

Her neighborhood was one of the last in the city to get a COVID-19 testing site. They opened first in wealthier, whiter North Side areas.

“When I talk about institutional racism, this is happening in real time,” James said.

She has seen the virus hit many of her patients, while others grow sicker from chronic disease, and it’s heartbreaking, James said. "As a Black doctor, I feel like I’m failing my patients every day,” she said.

While her clinic has remained open, many patients are too terrified of COVID-19 to come in. That means trying to treat complaints without physical exams or blood tests. She has tried sending patients prescriptions for blood pressure cuffs but some can’t afford the cost. The options are “have their blood pressure uncontrolled or adjust their medications blind,” she said.

For every patient who has called for an appointment, there are 10 others she hasn’t heard from in months.

“There is no way that all of a sudden overnight there’s no more heart attacks, no more strokes, no more patients having poorly controlled diabetes,” she said. “We have all seen our patients’ visits stop. Which is scaring me a lot. ‘’

It’s not just happening in Chicago.

There are signs it is already happening.

Government statistics from late January through May 30 suggest an increase in U.S. deaths from chronic diseases compared with historical trends. They include 7,000 excess deaths from hypertension, about 4,000 from diabetes and 3,000 from strokes — all conditions that disproportionately affect Black people, although the data don’t include race.

James says Floyd’s brutal death has added psychological trauma to the mix, and mental health care in many communities is scarce.

“There is an overwhelming need that we do not have the resources to address,’’ she said. “It’s devastating.”

Royanna Williams, 45, is a Black woman in Asheville, North Carolina, who suffers with persistent pain from autoimmune illnesses, which disproportionately affect Blacks.

Living with chronic illness had already left her anxious and depressed — feelings that have multiplied with the pandemic, Floyd’s death and the unrest that has followed.

“This right here is a whole ’nother ballgame,” she said.

Her medicines include hydroxychloroquine. Williams said she figured she’d have trouble getting refills the minute Donald Trump began promoting it without evidence that it works for COVID-19. "I was livid,’’ she said.

She hasn’t had to miss a dose yet, but Trump’s involvement has sparked mistrust. “Now I’m scared to take it,’’ she said. "I don’t know what’s in those pills.’’

She says white doctors have often discounted her pain and it has worsened as the pandemic has postponed her physical therapy sessions. Research has shown than Blacks are often under-treated for pain, partly because of false beliefs about supposed biological differences. As recently as 2016, data showed that half of U.S. medical students and residents believed Blacks didn’t feel pain the same way as other races.

Now there’s evidence that Blacks with fever and cough are less likely than whites to be referred for COVID-19 testing, said Dr. Malika Fair, a health equity director at the Association of American Medical Colleges.

“Race is a social construct and not based on biology or genetics,” Fair said.

Dr. Heidi Knoll, who is white and one of Williams’ physicians, says a history of mistrust and mistreatment is part of what keeps many Black people from seeking medical care in ordinary times. COVID-19’s toll and government's missed opportunities in handling the pandemic have compounded the problem, she said.

Her clinic, Mountain Area Health Education Center in Asheville, rushed to adopt telehealth for non-COVID treatment when the pandemic hit; now nearly half of all patient visits are by phone or video. Telehealth has expanded throughout the United States during the pandemic and Knoll, like many physicians, thinks it may help reduce racial health disparities by increasing access to doctors.

Williams knows her health makes her especially vulnerable to the virus. She has been terrified to go out since March, but staying home, where she lives with her autistic son and mother, has been stressful.

The recent protests over Floyd's killing have given her hope that racial change may be coming — especially, because whites have been involved in the demonstrations.

“People are amped up because of this pandemic,” she said. “Maybe he had to be that white lamb” — sacrificed so whites would pay attention.

Terrence Nichols has recovered physically from a relatively mild case of COVID-19, diagnosed in March. But as a Black man in Chicago, knowing its impact in his community has left Nichols feeling fearful, vulnerable and angry over the president’s push to reopen.

Blacks make up about 30% of Chicago’s population but almost half of the virus deaths, a disparity seen nationwide.

As of early June, an AP analysis found that roughly 26% of COVID deaths were in Black patients, while Black people represented 13% of the population in the 40 states that provided detailed demographic data.

When Brookings Institution researchers adjusted for age disparities between races on a national level — the white population in the U.S. is older, and thus more susceptible to COVID-19 than other races — they found that the death rate for Black individuals was 3.6 times than the rate of whites.

“He’s ready to reopen because of the economy and rich people are losing money,” Nichols said of Trump. If the virus was disproportionately killing rich white people, ‘’he would think twice,’’ said Nichols, 44.

Chicago recently relaxed stay-home orders and eased other restrictions, allowing Nichols to resume his pharmacy sales rep job, but he’s in no hurry to go anywhere but to work.

Nichols won’t join the protests in person, but he’s “inside the house raising my fist and cheering them on.’’

Floyd's killing “struck a chord,’’ he said. “It’s been happening since before I was born.’’’

His father is a physician; when Nichols was a teen the family lived in Chicago’s mostly white Beverly neighborhood. He recalls being chased there by KKK members wielding bats, and questioned by officers about where he was going when he was just walking home.

More recently, Nichols said, police “had me up against the car” and called for backup when he drove the wrong way on a one-way street.

He routinely checks the rear-view mirror whenever he drives past a police car, “to see if they make a U-turn and start following me.” It has happened many times.

“If you’re Black, it’s acceptable to be harassed,” Nichols said.

Rosetta Watson is only 38 but she has heart failure and needs valve replacement surgery. When COVID-19 hit Chicago in March, doctors postponed the operation indefinitely. Obesity surgery to take the burden off her heart has also been delayed by the pandemic.

She has sequestered herself at home, knowing COVID-19 could be fatal because of her poor health. It has already killed four of her relatives.

She recently had her first appointment with her heart doctor since the pandemic hit, and was told her increasing fatigue may be from the leaky valve. She understands that COVID-19 cases are more urgent but the delays are frustrating.

Meantime, she has watched the news, seen the protests on TV, heard about them trashing the local pharmacy. She supports the cause but not the property damage.

The Floyd death “is the same as it has always been. We’ve always had prejudice.” The difference is now “everyone is recording everything they see.’’

She’s been racially targeted, not by police but by strangers who disparage her white boyfriend with racist terms and by elderly neighbors in her apartment building who deride “you people” and won’t ride with her in the elevator.

She’s been racial profiled by a doctor who when Watson asked about her nose bleeds, demanded to know whether she had been “doing any recreational drugs like cocaine or heroin.” Turns out nose bleeds are a side effect of the nasal spray the doctor had prescribed.