Virus, more than Brexit fallout, worry in and near Gibraltar 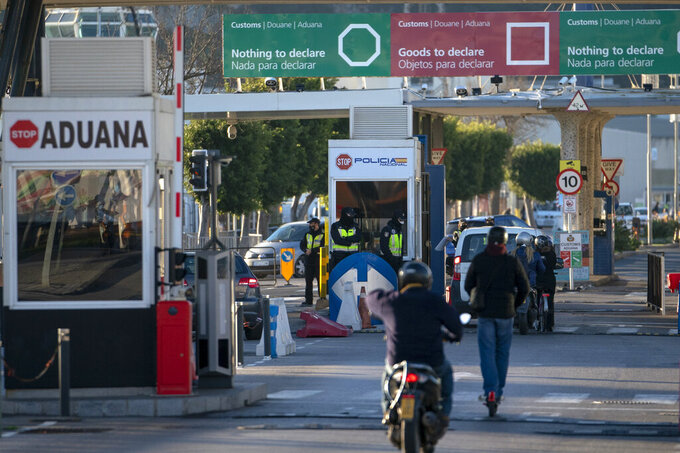 Spanish police officers stand at the border as people enter at Gibraltar from the neighbouring Spanish city of La Linea on Monday, Jan. 4, 2021. Fears of disruptions following Britain's departure from the European Union were replaced by coronavirus-related restrictions on border traffic between Spain and Gibraltar on Monday, the first working day at the United Kingdom's only land border with the European mainland. (AP Photo/Emilio Morenatti)

LA LÍNEA DE LA CONCEPCIÓN, Spain (AP) — Fears of disruptions following Britain’s departure from the European Union were replaced by coronavirus-related restrictions on border traffic between Spain and Gibraltar on Monday, the first working day at the United Kingdom’s only land border with the European mainland.

Only a share of essential workers from an average of 15,000 who cross the fence between Spain’s La Línea de la Concepción and the British territory on a normal day were venturing into Gibraltar, which went into lockdown late Saturday amid a surge in virus cases that is putting under pressure its limited health infrastructure.

Under the new stay-at-home order, the 30,000 residents on the British speck of land on Spain’s southern tip are only permitted to venture out for work, exercise, medical appointments or to buy essential items. Gibraltar authorities have reported more than 1,300 new cases during the last month, more than double from the levels in early December, and are investigating if the surge is linked to the new virus variant that has rapidly spread in Britain.

In remarks over the weekend, Gibraltar’s chief minister, Fabian Picardo, said that the first batch of 5,000 vaccines would arrive in Gibraltar on Jan. 9.

At least 200,000 people across the border in Spain, in the so-called Campo de Gibraltar subregion, are also under similar levels of restrictions. The area has seen a surge of the 14-day infection rate per 100,000 inhabitants to 300 cases, twice the average in the broader Andalusia region of southern Spain.

Despite having overwhelmingly voted against the U.K.’s EU departure, Gibraltar entered the new year with tighter new controls on what for decades has been an open border with the 27-nation bloc through Spain. The most immediate effect is on customs controls for some consumer goods intended for personal use, such as meat, milk, pet food, and fish produce in most forms.

Some of the longer-term concerns were dispelled last week after Spain and the U.K. clinched a preliminary agreement for making Gibraltar part of the Schengen area group of European nations sharing borders.

Madrid and London had been engaging for months in diplomatic negotiations over the post-Brexit future of Gibraltar, whose British sovereignty since the 18th century has been often disputed by Spain.

The “agreement in principle” should essentially lead to move border checks from the current fence with Spain to the international airport and the Gibraltar port, but a new treaty to be negotiated directly between the EU and the U.K. needs to be signed after jurisdiction issues and import duties are ironed out, according to authorities on both sides.

A major hurdle in the negotiations is whether the EU’s police force, Frontex, could be stationed in the British territory.