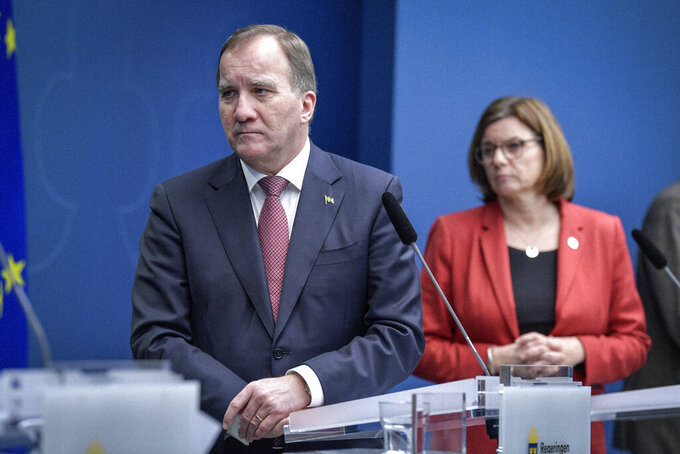 Sweden's Prime Minister Stefan Lofven and Deputy Prime Minister Isabella Lovin hold a coronavirus news conference, in Stockholm, Friday, Dec. 18,2020. The Swedish government is tightening nationwide coronavirus restrictions by lowering the number of people who can gather in a restaurant and making face masks mandatory on public transportation. Sweden has stood out among European nations for its comparatively hands-off response to the pandemic. (Jessica Gow/TT News Agency via AP)

COPENHAGEN, Denmark (AP) — Sweden is tightening nationwide coronavirus restrictions by requiring many people to work from home and reducing the number who can gather in restaurants, shops and gyms starting next week, but the government decided against ordering the country's first full lockdown to control a recent spike in virus cases, the prime minister said Friday.

Sweden has stood out among European nations for its comparatively hands-off response to the pandemic. The Scandinavian country has not gone into lockdowns or closed businesses, relying instead on citizens’ sense of civic duty to control infections.

However, the country has seen a rapid increase in confirmed cases that is straining the health care system. Prime Minister Stefan Lofven said, “The situation continues to be very serious,” which is why the government is introducing new limits on public activities.

“We believe that a lockdown is a burden for the population,” Lofven said. “We are following our strategy.”

The new restrictions taking effect on Dec. 24 include making face masks mandatory on public transportation and pushing back a nationwide cutoff time for bars and restaurants to sell alcohol to 8 p.m. instead of 10 p.m..

Lofven said people with non-essential jobs will be required to work from home, and Education Minister Anna Ekstrom said schools should continue to plan for distance education.

“It is not possible to return to a normal everyday life. The pandemic is about life and death,” deputy Prime Minister Isabella Lovin said at a news conference with Lofven.

Sweden, which has a population of 10 million, has reported 367,120 confirmed virus cases and 7,993 deaths since the start of the pandemic, according to the latest figures.

The government and Sweden’s chief epidemiologist, Anders Tegnell, repeatedly defended the country’s coronavirus strategy while reporting one of the world's highest per capita COVID-19 mortality rates. Tegnell said earlier this week that the death toll “is likely to continue to rise in the coming weeks.”

“We do not believe that it will have a very decisive effect, but it can have a positive effect on public transport during certain times,” Carlson said.

He added that they “can be useful in certain environments where you cannot keep your distance.”