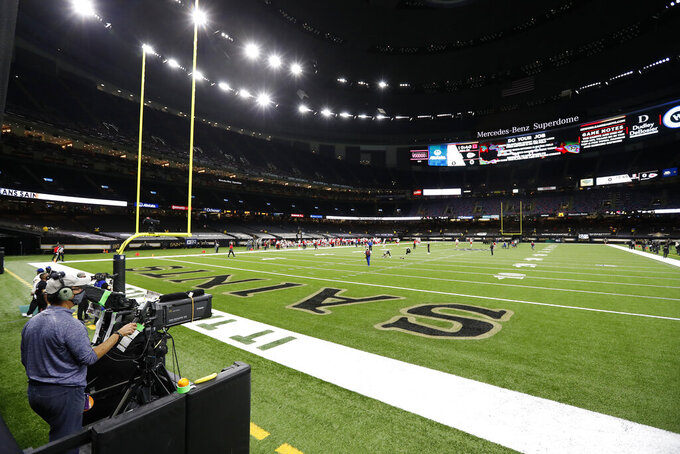 FILE - In this Sunday, Dec. 20, 2020, file photo, a cameraman shoots from the end zone of an NFL football game between the New Orleans Saints and the Kansas City Chiefs, in New Orleans. Plans for $450 million in upgrades to New Orleans’ iconic Superdome have been disrupted because of financial troubles caused by the pandemic. (AP Photo/Tyler Kaufman, File)

BATON ROUGE, La. (AP) — Plans for $450 million in upgrades to New Orleans' iconic Superdome have been disrupted because of financial troubles caused by the pandemic, the stadium's manager told state lawmakers during a budget hearing Wednesday.

The coronavirus outbreak temporarily ended concerts, monster truck shows and many other events at the domed stadium and the neighboring arena. Local hotel tax collections that help fund the facilities' management district plummeted as the virus obliterated tourist travel. Crowds at the Superdome weren't allowed or were greatly limited for New Orleans Saints' games in the 2020 football season.

In response, ASM Global — the company that oversees the Superdome, arena and other facilities in the Louisiana Stadium and Exposition District — slowed the stadium improvements and may not complete the full project plans as originally envisioned.

“We took a step back from the renovation project,” Evan Holmes, business operations director for ASM Global, told the House Appropriations Committee. “We’re taking it year by year, step by step to make sure we’re not overextending ourselves.”

The nearly 50-year-old stadium was supposed to see its ramp system removed and replaced with elevators and escalators, club and suite levels expanded, new entry gates erected, concession stands added and access for people with disabilities improved. When the project was announced, officials estimated construction would be complete before the Superdome hosts its next Super Bowl in 2024.

Early phases of the work are underway, with new emergency stairwells, freight elevators and upgraded security centers nearly complete. Work also is ongoing on new field-level suites and viewing decks, along with changes to accommodate that expansion.

Holmes didn't provide an updated timeline for the full list of upgrades, some of which would depend on whether state lawmakers allocate $90 million anticipated in the financing plans negotiated by Gov. John Bel Edwards that was aimed at keeping the Saints in Louisiana for decades.

The plans called for the state covering $90 million, the Saints putting up $150 million and the management district paying $210 million. Holmes said negotiations continue with the Edwards administration about the $90 million, but several lawmakers on the Appropriations Committee questioned whether the state should be paying for the stadium improvements.

“Let's be clear: They're the New Orleans Saints, not the Louisiana Saints,” said Houma Rep. Tanner Magee, the second-ranking Republican in the House.

Rep. Troy Romero, a Jennings Republican, asked whether New Orleans and neighboring Jefferson Parish could contribute some of the renovation cash. Rep. Dustin Miller, an Opelousas Democrat, noted the state has a $15 billion backlog of road and bridge work.

“We do support the Superdome,” Miller said. But he added: “We have to balance where our money's best used.”

New Orleans Rep. Gary Carter, a Democrat, said the Superdome is a state-owned building with events that draw people from around the country who support businesses that pay state taxes.

“It's an economic generator for the entire state of Louisiana,” Carter said.

Before the pandemic, the Louisiana Stadium and Exposition District's budget topped $94 million. It expected to spend as much as $97 million in the current financial year. But less than $32 million came in from events and tax collections, according to data presented to the House committee.

ASM cut costs by furloughing staff and laying off several dozen employees. Holmes said the management district used borrowed cash, shuffled available dollars and cut costs to close the gap. A shortfall of more than $12 million remains, which Holmes said he hopes can be filled with federal coronavirus aid dollars.

The Louisiana Stadium and Exposition District wasn't eligible for the federal Paycheck Protection Program set up to help businesses struggling in the pandemic, but Holmes said the latest federal coronavirus aid package has dollars for which the district could be eligible. If it can't get those funds, ASM may seek dollars from the state to fill the shortfall.