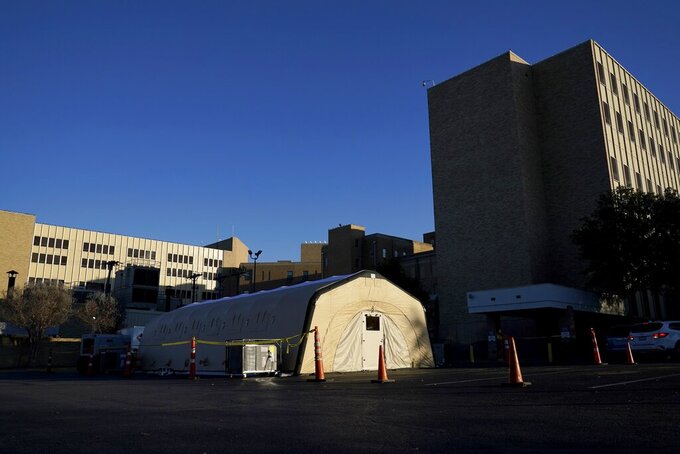 A portable, overflow, intensive care unit, that is currently not being used, is seen located behind Hendrick Medical Center on Wednesday, Dec. 16, 2020, in Abilene, Texas. (AP Photo/Tony Gutierrez)

ABILENE, Texas (AP) — In the weeks that Mark Riggs went from feeling worn down before Thanksgiving to dying of COVID-19 last Monday, only six calls about people not wearing face coverings rolled into the Abilene Police Department.

Even though defiance of Texas' mask mandate is easy to find here.

When Riggs checked into the hospital, a morgue trailer big enough to stack 24 bodies had just arrived out back. A medical field tent sprung up in the parking lot while doctors moved the 67-year-old college professor to a ventilator. He died in an intensive care unit that has been full for weeks and is the largest within roughly 15,000 square miles of pumpjacks and cattle pastures, bigger than Maryland.

Officers responded to three of the calls about face coverings, which have been required since June. No citations were issued.

“I've never been one to call out government or leadership,” said Katie Riggs Maxwell, 38, Riggs' daughter. “But it's suddenly extremely personal.”

As virus cases and deaths have soared across the nation this fall, pressure has intensified on governors who haven't issued mandates that require people to wear masks indoors and in public places. Health experts consider masks the most effective way of preventing the spread of COVID-19. Most states have statewide orders, and of the roughly dozen that don't, the majority are in the South.

But the debate over mandates and lockdowns — usually fueled by howls of violating individual freedoms — often drowns out the reality of whether the restrictions that are enacted are actually enforced to make them effective.

In some states like New York, where COVID cases overflowed hospitals earlier this year and were treated as a crisis, authorities have dispatched police to reports of violations, breaking up parties and even monitoring funerals where gatherings of unmasked people were anticipated. In California, Los Angeles County has issued more than 300 citations since September to churches, businesses and strip clubs for violations of COVID-19 restrictions.

But in many smaller cities, especially in politically conservative parts of the country like Abilene, a statewide mandate in place may not mean much because the threat of fines is nonexistent.

As families prepare to gather for Christmas, and create prime conditions for spread of the virus, it's unlikely Abilene will punish anyone who doesn't abide by the Texas rules on mask wearing and limiting outdoor gatherings to 10 people, even as overwhelmed doctors here are rejecting transfers from smaller hospitals and the city of 125,000 people struggles to stamp out a worsening outbreak.

On Thursday, Texas smashed a single-day record for new coronavirus cases with more than 16,000. Hospitalizations are at the highest levels since July and rising.

Across the U.S., attempts to vigorously police mask mandates and limits on restaurant seating have been met with defiance, and sometimes, threats of violence. In Tennessee, police officers this month began accompanying inspectors around Memphis after some were confronted with racial slurs. Health department inspectors in Maryland have also been harassed, particularly female inspectors, according to county officials.

There's no conflict in Abilene. Mayor Anthony Williams, who tested positive for the virus this summer, views enforcement as logistically difficult and an economic burden in a city where unemployment spiked tenfold by June. “We don't want to exaggerate the problem," he said.

Hospital leaders say they have not asked the city to reconsider.

“I think it would not be well received either by the typical West Texas native,” said Dr. Stephen Lowry, chief of staff of Hendrick Health in Abilene. He described them as "the typical rugged individualist, not wanting to be told what to do.”

He and the mayor believe Abilene residents have taken recent appeals to wear masks and avoid gatherings to heart. Churches paused in-person services. Cases are still rising but no longer as quickly in Taylor County overall, where at least 150 people have died, a number that has doubled since Nov. 1.

Still, residents and businesses are left to set their own boundaries, including none at all.

On the cautious end of the spectrum is downtown's Paramount Theatre, which closed indefinitely as cases surged before Thanksgiving even though it could remain open. The theater had sold tickets for a showing of a Christmas classic. Now people strolling past stop and snap photos of an unintentional summation of 2020 on the vintage red-letter marquee: "IT'S A WONDERFUL LIFE CANCELLED.”

Grayson Allred, the theater's technical director, said they noticed that many patrons who entered wearing masks took them off after they were inside.

“Air is going to circulate in here and there's no way getting out of it,” he said.

While many schools elsewhere rely on remote learning, the majority of Abilene's 15,000 students returned this fall to their campuses. Hallway traffic was rerouted to one-way and masks were required. One teacher who tested positive for the virus died.

At The Shed Market, a barbecue favorite in Abilene, there are no signs on the door encouraging face coverings or social distancing inside. Orders are rung up by unmasked employees behind the counter. One of owner Byron Stephenson's grandparents died of COVID-19. Stacie Stephenson, his wife and also an owner, is a former registered nurse.

Mark Riggs took the virus seriously at Abilene Christian University, where he came to finish his career after 16 years as a hospital biostatistician.

The desks in his class were spaced six feet apart and crews sanitized the room after every lesson. He and his wife, Debbie, stopped going to church.

He still picked it up. The first signs appeared after a night of hanging Christmas decorations with his grandsons, ages 6 and 3. Doctors put him on an air pump to help his breathing within two days of his hospitalization. When his condition worsened and the only option was a ventilator, his family asked for a video call with him first. His last words: “This is not the end of my story."

He died a week later. On Wednesday, Williams, the mayor, went on Facebook to defend the city's handling of the virus and remind people that vaccines were on the way. It galled Debbie Riggs, who says while he's finding silver linings, she's planning a funeral.

“For the mayor to say there’s light at the end of the tunnel, that's not helpful right now," said Debbie Riggs, standing on the campus where her husband of 41 years taught for more than two decades. “That's not taking action.”