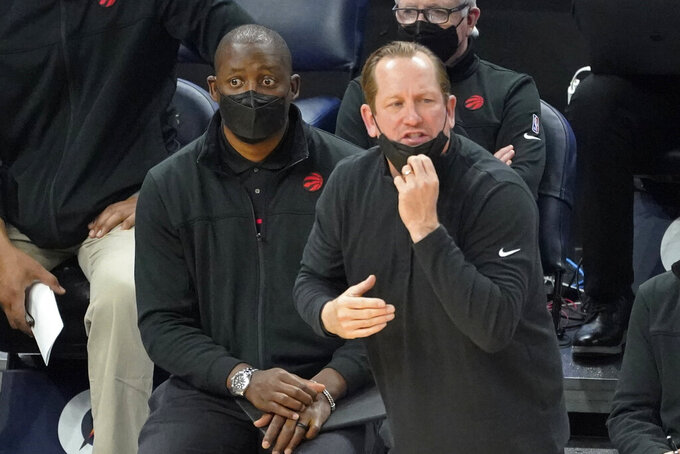 Toronto Raptors coach Nick Nurse talks to players during the second half of an NBA basketball game against the Minnesota Timberwolves, Friday, Feb. 19, 2021, in Minneapolis. (AP Photo/Jim Mone)

The Toronto Raptors were without six members of their coaching staff, including head coach Nick Nurse, and starting forward Pascal Siakam for Friday night’s game against Houston in accordance with the NBA's health and safety protocols regarding the coronavirus.

Assistant coach Sergio Scariolo was promoted to coach the team's game in Tampa, Florida, against the Rockets. The Raptors said Nurse and the remainder of his staff will continue to work remotely.

Scariolo had been away from the Raptors while coaching Spain in FIBA's EuroBasket 2022 qualifiers and just cleared quarantine Friday. The Raptors were considering other options if he was not cleared to coach in time, including bringing their G League staff from that league's bubble season, currently going on in Lake Buena Vista, Florida — about an hour from Tampa. The Raptors lost an assistant coach last weekend when Chris Finch was hired as Minnesota's head coach.

“I don't know how many hundreds or thousands of games he's been a head coach," Raptors general manager Bobby Webster said. “But it's unique, and he acknowledged that much, especially under the circumstances."

Scariolo has extensive experience as a head coach, winning championships of leagues in Italy, Spain and Russia, plus has been Spain’s national coach — helping that team win medals at the 2012 London Games and 2016 Rio de Janiero Olympics, plus capture the Basketball World Cup title in 2019.

Siakam was listed as out about two hours before the game, indicating that he either has a testing issue or a contact tracing issue. He played Wednesday night in Miami, when the Raptors lost to the Heat.

Webster said the team isn't certain if Siakam's issue is related to the issue with the coaching staff.

“The NBA is being extremely careful here," Webster said. “It's early in what's going on here, so I think we're all being conscientious and not taking any risks. ... We'll see what tomorrow brings us."

NBA Commissioner Adam Silver said options were considered, such as not playing the game.

“Anytime we have a positive case, we go through extensive contact tracing, player by player, team staff member by team staff member, and then that independent group makes that decision as to whether the game should go on," Silver said.

Silver added that group “was comfortable with the game going on."

After Friday, Toronto will have three games left before the All-Star break: games in Tampa against Chicago on Sunday and Detroit on Tuesday, then at Boston on Thursday. From there, the Raptors have a week off before resuming their season in Tampa against Atlanta on March 11.

In addition to Nurse and Scariolo, the other coaches on the Raptors’ roster are Adrian Griffin, Jama Mahlalela, Jim Sann and Jon Goodwillie. It was not immediately clear if they all are in the protocols, and who else from the staff would be away from the team as well.

The NBA has postponed 29 games this season already because of virus-related issues, though this is the first time that a team has said its coaching staff would be unable to be at a game because of the protocols.

Coaches, like players, are tested daily for coronavirus. There are a number of reasons why someone would enter the NBA protocols, including a positive test, a presumed positive test or contact tracing data suggesting that they may have been exposed to a person who is positive for COVID-19.

Nurse was coaching when Toronto played Wednesday in Miami.