Virus tests Lesley Stahl and CBS' '60 Minutes' on, off air 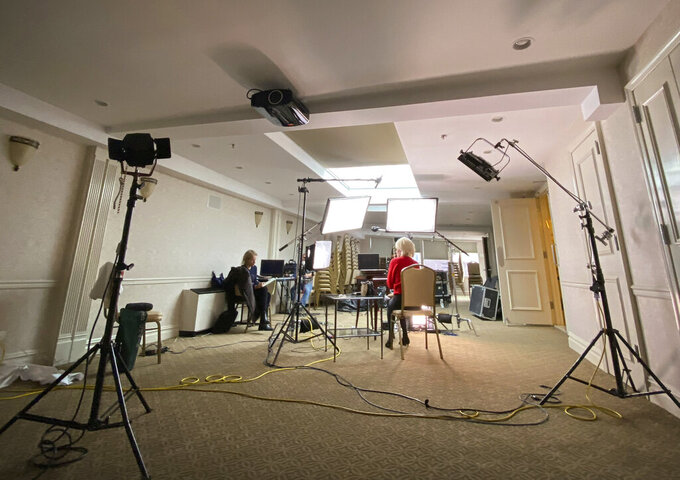 This image released by CBS shows "60 Minutes" correspondent Lesley Stahl, right, with her producer Sarah Koch. Stahl revealed Sunday that she had been hospitalized by COVID-19 but recovered, one of a number of cases of the disease that led to the shutdown of its offices. (Aaron Tomlinson/CBS News via AP)

NEW YORK (AP) — The coronavirus has tested “60 Minutes” both on and off the air in ways that the Sunday night newsmagazine has never seen in the 51 years of its existence.

The CBS program's longest-serving correspondent, Lesley Stahl, was hospitalized but recovered, others on the staff tested positive and — like many businesses — it has operated remotely for two months. At the same time, “60 Minutes” has dove into a breaking news story in ways that it seldom has before.

“I can't remember a time when we have done relentlessly, week after week, stories on something with this sort of scope,” said Bill Owens, the show's executive producer.

Stahl revealed her experience on Sunday's show. She fought the pneumonia that often develops with COVID-19 for two weeks at home and one week in the hospital. She wasn't alone with coronavirus at “60 Minutes.” Owens declined to say how many others had it, but said everyone was well now.

Other television journalists have come down with the disease, including Chris Cuomo and Brooke Baldwin of CNN, and George Stephanopoulos of ABC News.

“It's been difficult, but no more difficult for us than it is for people working on an assembly line or in the hospital,” Owens said. “This has reached everyone in some way. Everyone knows somebody who's been affected by this and ‘60 Minutes’ isn't any different.”

The virus also compelled a change in the very nature of the show.

“60 Minutes” is no stranger to news, and became more topical when Jeff Fager replaced original producer Don Hewitt. Owens took over after Fager, who had been under investigation for tolerating an abusive workplace, was fired in September 2018. Owens has been with “60 Minutes” for most of the past 17 years.

The show prides itself on in-depth pieces and a varied menu, the nature of a magazine. Yet for the past seven weeks, 15 of the 20 individual stories it has presented have been coronavirus-related. On two of those weeks, all three stories were about it. A virus story has been the lead item on each broadcast — four stories by Pelley, two by Bill Whitaker and one by Norah O'Donnell.

Owens said he's never seen a story with such a wide reach into so many people's lives.

“It's the economy, it's health care,” he said. “It has touched everything. What I've tried to do is bring something to this story that you haven't heard before, that is a little less breathless, is informative and educated.”

Pelley has reported on the virus' impact on small business, and on the trail of death in New York City. Whitaker confronted Trump aide Peter Navarro on the lack of protective equipment and profiled experts who try to map the spread of a pandemic. O'Donnell showed auto companies shifting to make ventilators, and David Martin reported on the virus' affect on the military.

The show's expertise in storytelling has created some standout moments. “How do you bring dignity to so many dead?” Pelley asked New York City's medical examiner, in a story with haunting images of refrigerated body trucks.

In his look at the military, Martin said, “We call it social distancing. The Army calls it tactical dispersion.”

“I'm not surprised to see this trend,” said news consultant Andrew Heyward, a former CBS News president. “It's encouraging to see the grand old man of television newsmagazines as agile and spry as ‘60 Minutes’ has been in covering COVID.”

It reflects the enormity, complexity and rapid evolution of the story and is what viewers need right now, he said.

The program has mixed in some non-coronavirus stories, like a piece on Japan's kabuki theater two weeks ago and an investigation about basketball in Africa that had been timed to coincide with the NCAA basketball tournament, which was canceled.

Since it's all being done remotely, the rigorous screenings designed to shape individual stories take place on Zoom.

“60 Minutes” viewership over the past two months has been up 2% over last year at this time, the Nielsen company said. CBS considers that somewhat deceptive, because the show missed boosts it normally gets when following the NCAA and Master's golf tournaments.

Traditionally, “60 Minutes” essentially shuts down at the end of May for vacations and to prepare for next season's stories. This year, the show is prepared to continue with fresh, weekly material at least through the end of June, Owens said.