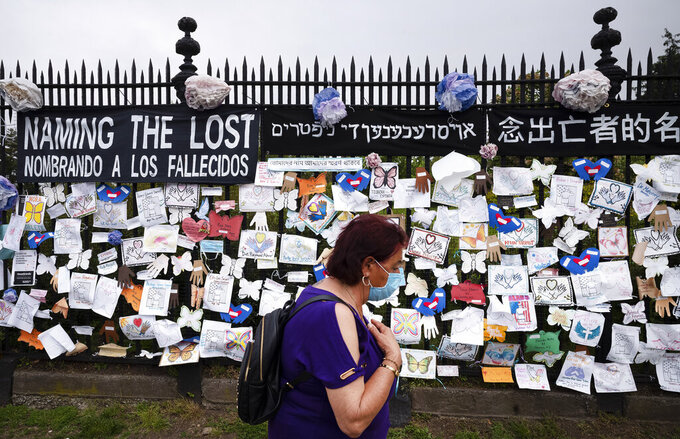 FILE - In this May 28, 2020, file photo, a woman passes a fence outside Brooklyn's Green-Wood Cemetery adorned with tributes to victims of COVID-19 in New York. The U.S. death toll from the coronavirus topped 200,000 Tuesday, Sept. 22, a figure unimaginable eight months ago when the scourge first reached the world’s richest nation with its sparkling laboratories, top-flight scientists and towering stockpiles of medicines and emergency supplies. (AP Photo/Mark Lennihan, File)

The neighborhoods including Borough Park and Williamsburg accounted for 20% of the city's COVID-19 cases in recent weeks, according to city Health Department numbers.

“We have a lot to do because we’re seeing a serious uptick in multiple neighborhoods simultaneously,” Mayor Bill de Blasio said at his daily coronavirus briefing. “And it’s something we have to address with a very aggressive public health effort right away.”

Some neighborhoods have drawn scrutiny since early in the coronavirus pandemic for large gatherings that violated social distancing guidelines. De Blasio personally oversaw the dispersal of a Hasidic funeral in Williamsburg in April and weathered criticism over a tweet warning “the Jewish community, and all communities" to heed the virus.

Dr. Mitchell Katz, the head of the city's public hospital system, said health officials are meeting with religious leaders in the hard-hit neighborhoods, making robocalls in English and Yiddish and sending sound trucks to flood the streets with messages about virus guidelines.

Katz said the city hopes to prevent gatherings such as wedding banquets in the communities that are seeing an uptick.

“Large indoor activities are a huge problem for COVID transmission,” he said.

Katz said his own father-in-law died of COVID-19 two nights ago in Israel.

Spikes in coronavirus infections have also been tied to other types of religious gatherings in New York, as elsewhere. The Lighthouse Baptist Church in upstate Chemung County has been linked to at least 45 cases across six counties.

Rabbi Avi Shafran, a spokesperson for Agudath Israel of America, an Orthodox Jewish umbrella organization, said city officials are right to call on the community “to do all it can to limit the spread of COVID-19" but should not single out any particular group.

“There are likely people in the Orthodox community, as there are in other groups, including club-goers and protesters, who are not heeding the guidelines aimed at curbing the spread of the disease,” Shafran said. “They need, all of them, to realize that it is dangerous, for themselves and others, to not follow health authorities’ recommendations.”