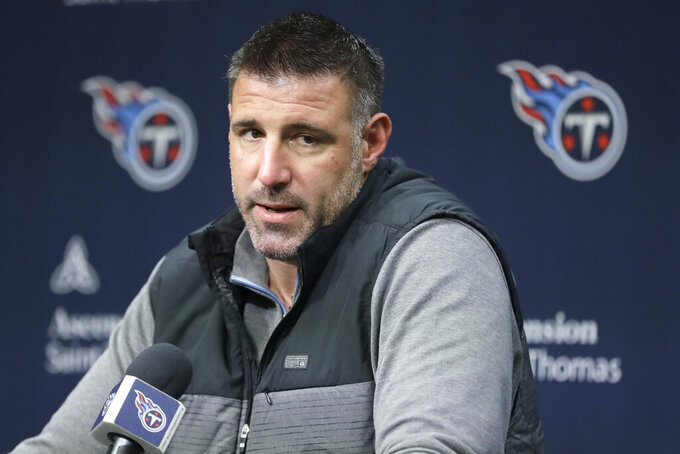 FILE - In this Jan. 20, 2020, file photo, Tennessee Titans head coach Mike Vrabel answers a question during an NFL football news conference in Nashville, Tenn. Vrabel has seen all he needs to see from his Titans during this very unique and virtual offseason. That's why Vrabel and the Titans wrapped up their offseason program Thursday, Jan, 11, 2020, even though the NFL is allowing teams to work through June 26. (AP Photo/Mark Humphrey, File)

NASHVILLE, Tenn. (AP) — Tennessee coach Mike Vrabel has seen all he needed from his Titans during this very unique and virtual offseason.

That's why Vrabel and the Titans wrapped up their offseason program Thursday, even though the NFL is allowing teams to work through June 26.

“I felt like this was the right time ...," Vrabel said soon after a final team meeting for the offseason. “I didn't want it to drag. I didn't want to see these long faces in the meeting.”

Vrabel credited the Titans with being dedicated to both working out and attending the Zoom meetings and virtual sessions that the NFL replaced the traditional offseason programs with due to the COVID-19 pandemic. The NFL announced Thursday teams could work through June 26 virtually, but coaches working with players on a field or even inside the same meeting room will wait until training camp.

Vrabel said he didn't consider waiting for the slight chance the NFL might allow healthy players to return to work at team facilities this offseason.

“I anticipate an earlier start to training camp,” Vrabel said. "So I felt like in order to allow for our players and their families to be emotionally and physically ready for the season, I wanted to try to give them some of that time, as well as our coaching staff, so that we could come back fresh and ready.”

The Titans currently are scheduled for their preseason opener Aug. 15 at Washington, with training camp expected to open around July 28 — 48 days before their season opener Sept. 14 at Denver. That could change depending on discussions between the NFL and the NFL Players Association.

Tennessee is coming off a season in which the franchise reached its first AFC championship game in 17 years before losing to Kansas City.

The Titans re-signed Ryan Tannehill to a four-year contract in March just before free agency opened, and the veteran quarterback recently relocated from Florida to Nashville. He has been having some throwing sessions with teammates, and he also organized a Paintball outing Wednesday.

Tennessee still has some unfinished business before training camp opens.

Derrick Henry, the NFL rushing leader last season, signed his franchise tag in April. General manager Jon Robinson said Thursday he continues talking with Henry's representatives, hoping to agree on a long-term deal. The Titans have until 4 p.m. EDT on July 15 to do that.

The trade makes plenty of sense if the Titans wind up signing linebacker/defensive end Jadeveon Clowney, who remains a free agent. Tennessee has not hid its interest in Clowney, who had his best season in 2017 when Vrabel was his defensive coordinator in Houston. That's also the only season Clowney has played all 16 games.

Robinson said there hav not been any recent talks but the Titans will continue monitoring Clowney's availability.

“I think we would be a pretty good fit for him," Robinson said. “And there was some mutual interest there when we started the discussion, but I would say that really hasn't grown any legs since we spoke last.”