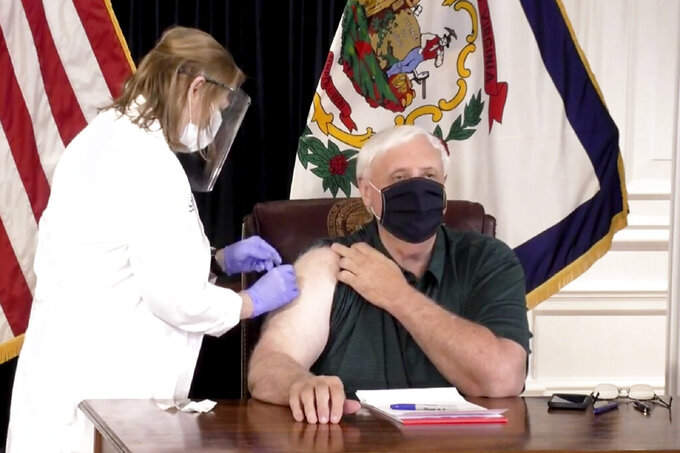 In this image made from video released by the State of West Virginia, a nurse administers a coronavirus shot to west Virginia Gov. Jim Justice, Monday, Dec. 14, 2020, in Charleston, W.Va. The 69-year-old Republican governor said he would receive a shot before cameras which would make him one of the first top elected officials in the country to get vaccinated. Officials said they want to demonstrate their confidence in the vaccine. (State of West Virginia via AP)

CHARLESTON, W.Va. (AP) — West Virginia, the last state to report a coronavirus case, spent relatively little on protective medical gear during the early months of the pandemic compared to other states, an Associated Press analysis shows.

While other states spent tens of millions of dollars, sometimes trusting new companies that failed to deliver promised orders, West Virginia mostly spent on a handful of distributors. It bought no ventilators.

State purchase orders given to AP through a public records request show West Virginia spent less than $3.6 million on masks, gloves, gowns and other protective gear from the onset of the pandemic through late spring.

Lawrence Messina, a spokesman for the state's pandemic response, said Saturday that the state spent more than $8 million through early May on protective gear related to the virus outbreak. The additional expenditures were not included in the public records given to AP.

The AP found that states nationwide spent more than $7 billion for personal protective equipment and high-demand medical devices such as ventilators and infrared thermometers this spring. The data, obtained through open record requests, is the most comprehensive look yet at how much states were buying, whom they were paying and how much they were spending as they raced to stockpile scarce supplies.

The data covers the period from the emergence of COVID-19 in the U.S. in early 2020 to late spring, when many governors were describing the marketplace for protective gear and medical equipment as the Wild West. Supplies often went to the highest bidder, even if they were promised to someone else.

“Given the pandemic’s global reach, West Virginia was buying everything it could once a potential vendor was vetted and determined to be trustworthy,” said Messina. “It’s no exaggeration that the shortage was worldwide. As a result, West Virginia had to consider companies that could get PPE from overseas.”

West Virginia didn't crack 10,000 confirmed cases until late August, and the outbreak has since dramatically worsened. Daily case totals have broken records several times in recent weeks. Confirmed and probable deaths linked to COVID-19 exceeded 1,000 this week. There have been nearly 57,900 confirmed cases.

The bulk of the state's three dozen orders in the early period went to Ballard Safety, with the initial pricey mask order, and Fastenal, where it spent a total of $1.5 million to buy N95 and KN95 masks, goggles, gloves and coveralls.

West Virginia spent anywhere from 77 cents to nearly $6 for N95 masks across three suppliers, according to the data provided to AP. The most expensive item it purchased was a single $226 thermometer from laboratory supplier Thomas Scientific.

Messina said Fastenal was initially “efficient at providing small amounts” of items, but the state looked to vendors that could fulfill larger orders.

Other expenditures in AP's analysis included:

The state had a cache of gloves, gowns, coveralls, N95 respirators and safety glasses left over from the 2009 H1N1 pandemic, Messina said. He said the state also received personal protective equipment from the federal government's stockpile and had enough ventilators in reserve.

"We feel that we have a solid safety stock for the state, and the medical supply system is catching up,” Messina said.