Wait is on in Alaska Senate race as ballot count continues 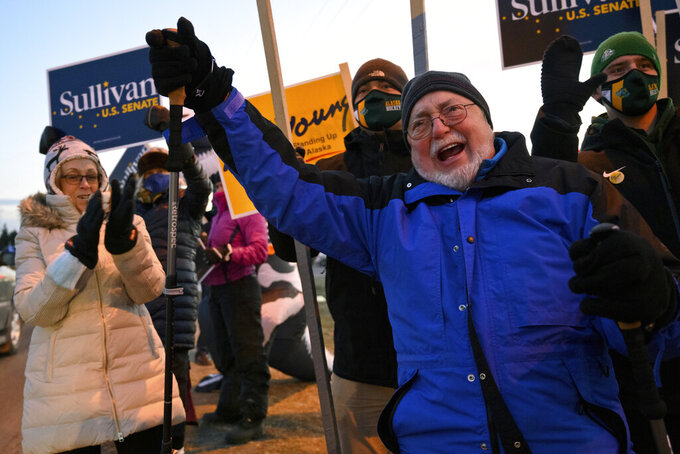 JUNEAU, Alaska (AP) — The waiting game is on for the candidates in Alaska’s hard-fought U.S. Senate race, with early results favoring Republican incumbent Dan Sullivan, who predicted a win. His main rival, Democratic-backed independent Al Gross, urged patience with thousands of ballots remaining to be counted.

Initial returns counted election night and into Wednesday showed largely similar vote tallies — and advantages — for the Republicans in the top-tier races: President Donald Trump, Sullivan and U.S. Rep. Don Young, who has served in the House since 1973 and is seeking another term. The last time a Democratic presidential candidate won the state was 1964.

The votes in that preliminary tally included those cast on Election Day and early in-person votes through Oct. 29.

“We are on a clear path for a resounding victory for our state and our country because of that positive future that we have laid out,” Sullivan told his supporters in Anchorage late Tuesday. “We are going to win. We are going to win big because our best days are ahead of us.”

Data released Wednesday showed the Division of Elections so far had received more than 114,000 absentee ballots, which it has said it plans to begin counting seven days after the election. Early in-person votes cast after Oct. 29 also are expected to be counted then.

Fundraising figures through mid-October showed Gross outraising Sullivan in a state that has leaned Republican. Since 1980, Alaska voters have elected one Democrat — Mark Begich — to the U.S. Senate. Begich served one term before losing a tight race to Sullivan in 2014, a year, like this one, in which control of the Senate was on the line. Gross has said he would caucus with Democrats and is the party’s nominee.

Sullivan, in an interview, said a takeaway from reelection wins by colleagues, such as Republican Sens. Lindsey Graham of South Carolina and Joni Ernst of Iowa, “is a theme that I think’s going to be the theme of our race, which is, all the money in the world can’t buy an election.”

Fisherman Mike Hamar of Juneau said he voted for Gross. “I wouldn't say that I'm super-excited about him being a senator, because I just don't know enough about the guy,” he said.

Hamar, who said he changed his party registration from nonpartisan to Democrat, said there were things he liked about Sullivan but Trump was a factor for him.

“At the end of the day, I cannot get behind Donald Trump because I ... don’t like a guy who doesn’t play by any rules, and I respect my wife and I respect my mother,” he said, adding later: “Anybody who is kind of behind the Trump team, I just can’t get on board with that.”

Sullivan, who withdrew his support of Trump in 2016 after a 2005 video of Trump making lewd comments about women surfaced, said he planned to vote for Trump this go-round, and Trump endorsed him.

Tom Larabee, a Republican in Anchorage who said he had been a stone mason, said he supported Sullivan. He noted Gross emphasized how often Sullivan voted with his party.

“Well, here's my take on it: If I wanted him to vote with the Democrat Party or on the liberal side of things, I would have voted for a liberal or a Democrat,” Larabee said. “I voted for him because I want him to vote with my values and my beliefs.”

He said he strongly supports Trump.

Amanda Black, a project manager in Juneau who said she's registered as a Libertarian, said she “pretty much went Democrat down the ticket.” She said she voted for Gross and for Alyse Galvin, the independent running as the Democratic nominee against Young.

“Even the impression of a willingness to work more across the aisle would be great,” she said.

Sullivan said a lot of bipartisan work gets done in Washington, D.C., but doesn't get as much attention.