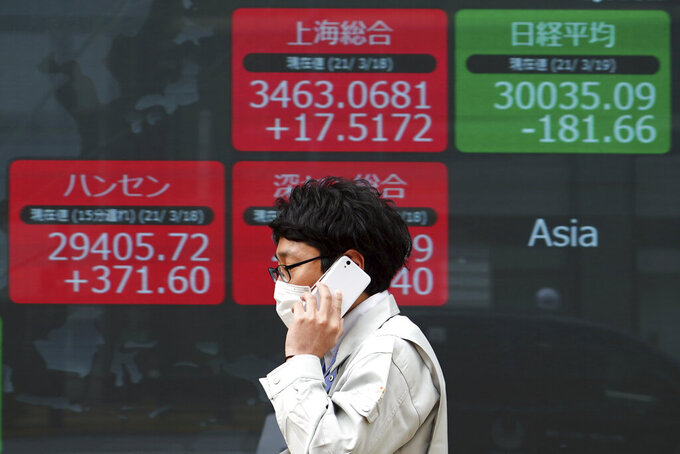 Wall Street closed out a choppy week of trading Friday with major stock indexes mostly lower and all finishing in the red for the week.

The S&P 500 ended 0.1% lower after reversing a small gain. The benchmark index, which hit an all-time high on Wednesday, posted its first weekly decline in three weeks. Losses by banks, industrial companies and technology stocks weighed on the market. They offset gains in companies that rely on consumer spending, health care and other sectors.

Bond yields were mixed, though the 10-year Treasury yield inched higher. The closely watched yield, which influences interest rates on mortgages and other consumer loans, has hovered this week near the highest level since January.

Higher yields put downward pressure on stocks generally, in part because they can steer dollars away from the stock market and into bonds instead. That makes investors less willing to pay as high prices for stocks.

“Overall, the very near term concerns are going back to some of the bigger picture questions,” said Barry Bannister, chief equity strategist at Stifel. “How high can yields go and what does that mean for stock valuations?”

A late-burst of selling may have been caused by “quadruple witching,” the simultaneous expiration of four kinds of options and futures contracts. The phenomenon happens four times a year and forces traders to tie up loose ends in contracts they hold.

Bank stocks fell after the Federal Reserve announced it would end some of the emergency measures put in place last year to aid the financial industry deal with the pandemic. The move will restore some of the capital requirements for big banks that were suspended in the early months of the viral outbreak, in order to give banks flexibility. The banking industry had hoped those measures would be extended.

The announcement briefly raised concerns about more bond selling, but those fears have been tempered, Bannister said.

Several Big Tech companies rose. Netflix gained 1.5% and Amazon.com added 1.6%. Facebook, meanwhile, climbed 4.1%. Even so, the S&P 500's tech sector fell, weighed down partly by Visa. Shares in the financial services company fell 6.2% for the biggest decline in the S&P 500 following reports that the Justice Department is investigating the company over its debit card practices. Mastercard fell 2.9%.

As interest rates have risen, pricier stocks like technology companies have fallen.

The yield on the 10-year U.S. Treasury note rose to 1.73% from 1.72% late Thursday. The prospect of higher interest rates as bond yields rise has some investors concerned that economic growth could slow.

There are also concerns that the rise in bond yields could be a harbinger of inflation. Fed officials said earlier this week that they may let the U.S. economy “run hot” for some time in order to not stymie the economic recovery as the pandemic eases.

Shares of Nike fell by 4% after the athletic apparel company said pandemic-caused congestion at ports caused sales to slow in the last quarter.