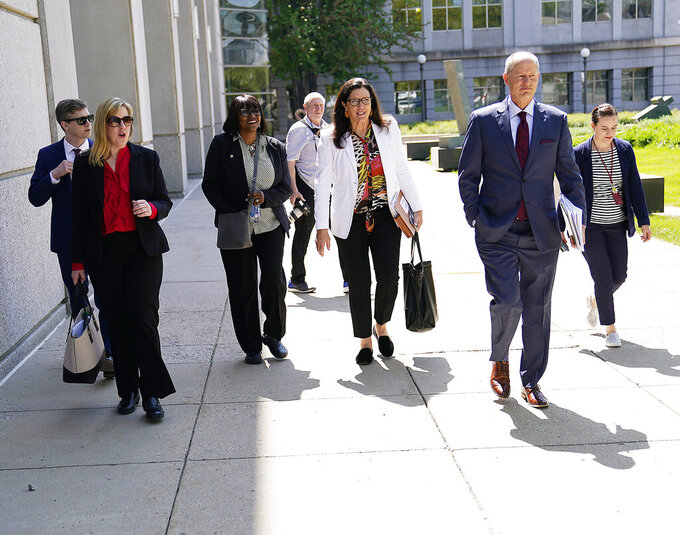 ST. PAUL, Minn. (AP) — The leaders of the Minnesota Legislature and Democratic Gov. Tim Walz announced a $52 billion deal for the state's next two-year budget on Monday, but lawmakers will have to finish the work next month and difficult negotiations still lie ahead on police accountability and other policy issues.

The agreement calls for a balanced two-year budget without raising taxes, while fully exempting from state taxes federal Paycheck Protection Program loans to businesses and unemployment insurance benefits that were raised during the pandemic. It also includes extra money for summer school to help students catch up after a year of distance learning.

“Minnesota did it again. We found commonality amongst ourselves,” Walz said at a news conference called to announce the deal, which was reached at about 12:15 a.m.

Walz, Republican Senate Majority Leader Paul Gazelka and Democratic House Speaker Melissa Hortman agreed it was impossible to nail down the language of all the major budget bills and get them passed before Monday night's constitutional deadline for the regular session to adjourn, so lawmakers will have to go into overtime.

“But you have three people who basically respect each other and are able to work well together despite huge ideological rifts between them,” said Hortman, of Brooklyn Park.

The task of resolving their differences was harder this year because lawmakers mostly met remotely due to the pandemic and had fewer chances for one-on-one deal-making. The $52 billion deal compares with the $48 billion budget that the Legislature approved in 2019 and $52.4 billion for Walz's original budget proposal.

Before adjourning, the House and Senate voted to liberalize the state's medical marijuana program, which is one of the country's most restrictive and expensive, by allowing smokable marijuana. Democratic House Majority Leader Ryan Winkler, of Golden Valley, said costs to patients could fall to around one-third the cost of the oils and pills now available in Minnesota. The House passed a bill to legalize recreational marijuana last week but the Senate refused to take it up.

The governor plans to call the special session for no later than June 14, but the work will begin earlier. Walz is required by law to reconvene lawmakers by that date as a condition for extending the broad emergency powers he has used to respond to the coronavirus pandemic.

Those powers, which the governor holds under the peacetime state of emergency he declared in March 2020, have been a major source of friction between the governor and Republicans. But Walz repealed his statewide mask mandate last week, and has lifted other restrictions in time for Memorial Day weekend. Walz said that leaves just managing the state's vaccination drive and qualifying for federal funds as the primary reasons to keep extending those powers.

Deciding how to spend $2.8 billion in federal COVID-19 relief money was one of the main complications in reaching a deal, the leaders said. The state didn't get federal guidance on how it can spend that money until last week. Walz will control $500 million of that sum, while the Legislature will get a say in how the rest is spent.

Hortman and Gazelka have left it up to the conference committee negotiating the public safety budget bill to find common ground and decide which Democratic police accountability proposals will make it into the final version.

Senate Republicans had resisted the policing package passed by the House, saying they wanted to focus on the budget and allow time to implement a policing bill that passed last summer following the death of George Floyd. The new package was spearheaded by the legislative People of Color and Indigenous Caucus, which had hoped to build on the momentum of the murder conviction of former Minneapolis police Officer Derek Chauvin in Floyd's death.

“Depending on who you're talking to, we're either way apart or close,” said Gazelka, of East Gull Lake. “Because there are some things that we think that we can do, but again, some people would want a lot more, some people want less.”

Another unresolved policy dispute, which the leaders left up to a different conference committee, is the future of Walz's proposed “Clean Car” rules, which aim to accelerate the shift to electric cars. Republicans have threatened to block the entire natural resources budget bill in an effort to block the plan, raising the specter of a shutdown of state parks just ahead of the Fourth of July weekend.

Republican House Minority Leader Kurt Daudt, of Crown, who was not included in the three-way negotiations, criticized the deal on Paycheck Protection Program loans and unemployment insurance. He said the failure to pass the exemption earlier means that roughly 250,000 laid-off workers and 200,000 businesses will have to pay those taxes by midnight Monday and wait for refunds. State officials haven't figured out yet whether those people and businesses will have to file amended returns or whether the state can process refunds on its own.

“This was the least productive session in modern history,” Daudt told reporters after adjournment.