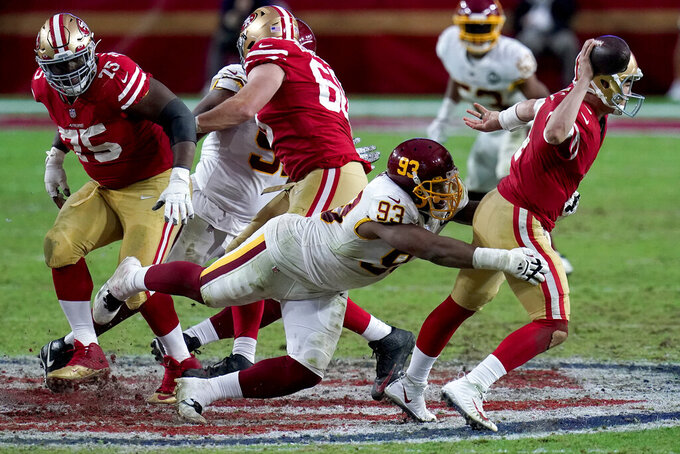 Washington (6-7) has won four straight games and is one game ahead of the New York Giants, who lost to the Arizona Cardinals 26-7 earlier Sunday. It is Washington's first four-game winning streak since 2016.

Washington can thank its young, impressive defense for this win. The team took a 13-7 lead at halftime after Young scooped up a fumble, shook off a tackle and ran 47 yards down the left sideline for a touchdown with 1:11 left in the second quarter. It was Young’s first professional touchdown.

Even at 264 pounds, the No. 2 overall pick easily outran the San Francisco offense into the end zone, palming the football in his left hand as he cruised past the pylon.

Curl delivered Washington's next huge moment on the final play of the third quarter. He snagged a pass from Nick Mullens and ran 76 yards the other way for a 23-7 advantage. Curl was the team's seventh-round pick this year.

Washington is the first team to get defensive touchdowns from two rookies in the same game since the Rams against the Texans in 2013.

The game was in Arizona because of coronavirus restrictions in the 49ers' home county of Santa Clara. The 49ers (5-8) have lost five of their past six games.

The 49ers pulled within 23-15 on a 6-yard pass from Mullens to Kyle Juszczyk and a 2-point conversion with 10:18 left. San Francisco had four more offensive possessions but never seriously threatened.

Washington won without scoring a touchdown in a road game for the first time since 1992. The team's offense was limited after Alex Smith's right leg injury caused him to miss the second half.

Dwayne Haskins, the 15th overall pick in the 2019 draft, replaced Smith. The 23-year-old Haskins was the team's starter at the beginning of the season but benched after four games.

Haskins wasn't particularly good, but didn't have to be, completing 7 of 12 passes for 51 yards. He kept Washington out of trouble. The defense did the rest.

San Francisco couldn't get much going after taking a 7-0 lead. Mullens completed 25 of 45 passes for 260 yards, one touchdown and one interception. Brandon Aiyuk caught 10 passes for 119 yards.

Washington won despite losing Smith because of problems with his surgically repaired right leg, which he broke in two places in November 2018. The injury sidelined him for nearly two calendar years.

The 36-year-old Smith was 8 for 19 for 57 yards and an interception in the first half. He walked to the locker room in the final minute of the second quarter.

Haskins started the second half. Smith was wearing a mask and holding his helmet while pacing along the sideline.

San Francisco: travels to the Dallas Cowboys next Sunday.