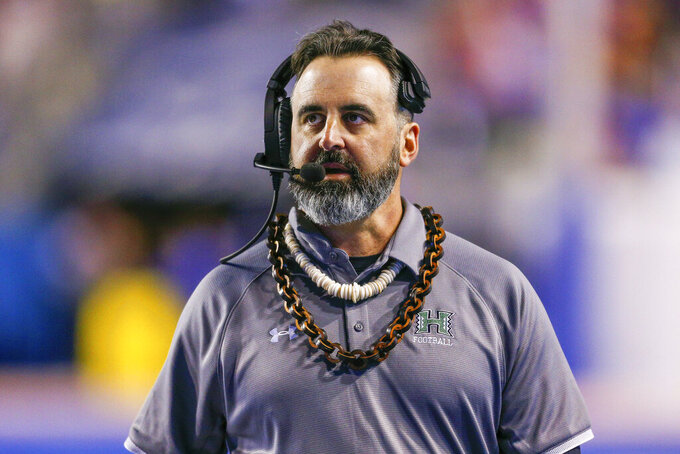 FILE - In this Saturday, Oct. 12, 2019, file photo, then-Hawaii head coach Nick Rolovich walks the sideline during the second half of an NCAA college football game against Boise State, in Boise, Idaho. It took nine months for Rolovich, the new Washington State football coach, to conduct his first practice with the Cougars after the coronavirus led to the cancellation of spring practice and delays in the start of the 2020 season. Rolovich was hired from Hawaii in January after Mike Leach left for Mississippi State. (AP Photo/Steve Conner, File)

It took nine months for new Washington State coach Nick Rolovich to conduct his first practice with the Cougars after the coronavirus led to the cancellation of spring practice and delays in the start of the 2020 season.

But Rolovich sees that short schedule of games as an opportunity for the Cougars, who are picked by media to finish last in the Pac-12 North.

“There's six or seven games and it’s about who gets hot and who stays together and who believes they can win,'' said Rolovich, who was hired from Hawaii in January after Mike Leach left for Mississippi State. “It’s who’s hot and who’s playing well at that time.”

Rolovich has big shoes and big expectations to fill after Leach's tenure on the Palouse. Leach led the Cougars to a bowl game in each of his last five seasons in Pullman and in six of the eight seasons he was in charge of the program.

While Leach became the third-winningest coach in WSU history during his eight seasons, his personality and attitude — and constant losing to archrival Washington — could be abrasive to some. Rolovich seems to be more in line with past Washington State coaches like Jim Walden and Mike Price, who had outgoing personalities.

Rolovich's gregarious personality has already made a solid impression.

“He's a player's coach,'' running back Max Borghi said. “He cares about his players a whole lot."

The Cougars were one of three programs in the Pac-12 that didn’t get any spring football in and they're also installing new schemes on both sides of the ball.

Leach used the Air Raid offense to great success at Washington State and Rolovich's run-and-shoot system is similar but will rely more on the run game.

The biggest question for the Cougars is how they go about replacing national passing leader Anthony Gordon at quarterback. Gordon threw for 5,579 yards and 48 touchdowns last season and none of the players competing to replace him has taken a snap for the Cougars.

Borghi is likely to get more rushing attempts under Rolovich. Borghi was an All-Pac-12 honorable mention last season after recording 1,435 all-purpose yards and 16 total touchdowns, second-most in the league. He was the only player in the Power Five with 800-plus rushing yards, 550-plus receiving yards and 16 total touchdowns after rushing for 817 yards and 11 touchdowns while also catching a team-high 86 passes for 597 yards and five scores. Borghi led all Pac-12 running backs by averaging 6.4 yards per carry and led all running backs nationally with his 86 catches. “Now I can prove what I am capable of,'' Borghi said. ”I know I'm a great runner.''

The Cougars are perhaps the most financially challenged of the Power Five programs, and the pandemic won't help matters. Rolovich took a voluntary 15% pay cut, while his assistants took a 10% salary reduction, the school has said. Athletic director Pat Chun said the goal is to cut into a $30 million loss in athletic department revenue this fall because of the pandemic. Washington State was already facing financial woes prior to the arrival of COVID-19. The athletic department has a debt of about $100 million from the construction of a new football operations building, stadium upgrades and other spending in the past decade.

The Cougars will struggle to replace Bryce Beekman, a starting defensive back who was found dead in his apartment in March from acute intoxication. Officials said the 22-year-old Beekman died after consuming a combination of fentanyl and promethazine and his death was ruled accidental. No one will wear his No. 26 this season. Washington State is just two years removed from the suicide of quarterback Tyler Hilinski in January 2018.

All classes at Washington State are being conducted remotely, but Pullman was hit with a surge of cases when students returned to campus in August. Football players are tested every day and get results before practice begins. Borghi said he never considered opting out of the season. “I love the game of football,'' he said. ”I would never opt out.''

The Cougars' three nonconference games, at Utah State and at home versus Houston and Idaho, were canceled because of the coronavirus. The annual game against archrival Washington, usually the regular-season finale, will be played midseason.