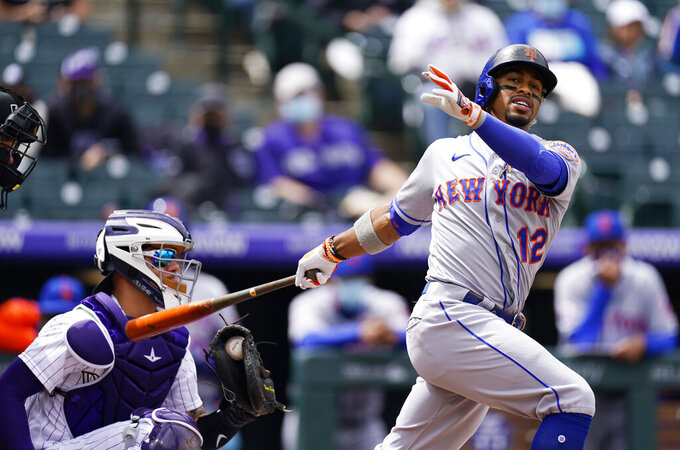 FILE - In this Sunday, April 18, 2021 file photo, New York Mets' Francisco Lindor grounds out against Colorado Rockies starting pitcher Antonio Senzatela in the first inning of a baseball game in Denver. Francisco Lindor's contract negotiations with the Mets seemed pretty smooth. His swing certainly has not. The $341 million star shortstop entered Wednesday, April 28, 2021 batting .212 with three RBIs through 18 games with his new team and started hearing boos Tuesday night at Citi Field after grounding out late in a 2-1 loss to Boston. (AP Photo/David Zalubowski, File)

The $341 million star shortstop is batting .203 with three RBIs through 19 games with his new team and has started drawing boos at Citi Field.

Honeymoon's over. Welcome to New York.

“It’s interesting and it’s funny, and it sucks," Lindor said Wednesday afternoon. "It doesn’t feel right, for sure. Interesting because it’s the first time that it happened in my career. And funny because I’m getting booed and people think I’m going to go home and just think, oh, why am I getting booed? I get it. They’re booing because there’s no results. That’s it.

“They expect results, I expect results and I get it, you know? It’s part of the job,” he added. "I just hope they cheer and jump on the field when I start hitting home runs and start helping the team on a daily basis a lot more than I’m doing right now.”

The four-time All-Star and two-time Gold Glove winner was acquired in a blockbuster trade with Cleveland in January, giving the Mets one of baseball's brightest stars. New York also received pitcher Carlos Carrasco, who is sidelined with an injury, in exchange for young infielders Andrés Giménez and Amed Rosario, plus two minor league prospects.

The deal generated excitement among Mets fans eager to see the team return to the playoffs for the first time since 2016. Lindor could have become a free agent after this season, but new owner Steve Cohen shelled out $341 million to sign the switch-hitter to a 10-year contract that begins in 2022.

Lindor, already guaranteed $22.3 million for this season, agreed to the long-term deal on the eve of opening day, but needless to say he's not off to the start he envisioned in New York. He has one home run, two extra-base hits and a measly .578 OPS in 83 plate appearances for the Mets, who are 9-10.

Not at all what was expected from a dynamic 27-year-old player who entered Wednesday with a .284 career batting average, 139 homers, 99 stolen bases and an .828 OPS in seven major league seasons.

Lindor walked his first time up Wednesday against Boston but struck out in his next two trips and was booed for the second consecutive night, this time by a sellout crowd of 8,051 with capacity limited because of the coronavirus pandemic.

He ripped a line drive in the eighth inning but got robbed of a hit on a leaping grab by second baseman Marwin González, and finished 0 for 3 in New York's 1-0 loss.

“I honestly feel good,” Lindor said before the game. "Yeah, there’s times where I feel like I should have got a hit that at-bat with that pitch and I just missed it. It’s part of the game. I’m trying. I’m trying as hard as I can to be successful and help the team win.

“Yesterday there was a couple of pitches that were balls that I chased. I honestly feel like that was either the first or the second (time) in the past couple days that I actually started chasing. I feel like I was having quality at-bats the whole entire time."

Mets manager Luis Rojas said Lindor arrived at the ballpark very early for extra practice Wednesday and has been working with hitting coach Chili Davis to get out of his funk.

“I know exactly what I’m doing. That’s why I’m not frustrated in a sense where I’m going home or after every at-bat I’m constantly thinking and thinking and thinking, because I know what’s happening," Lindor said. “I feel like I haven’t put the best swing on the baseball these past couple of games, but I don’t feel like I’m in a slump."

Rojas said Davis was looking to get Lindor back to incorporating some drills he used previously in Cleveland, but Lindor said he's been doing “the exact same thing” as his entire career.

“It's going to work,” said Lindor, who remained upbeat as usual during his video conference with reporters and even chuckled and smiled several times.

"Right now if fans and people think I’m not doing my part to win and they want to see results — the results will come for sure. They will come.”

Lindor did say he's still trying to adjust to the National League after spending his first six seasons in the AL.

“They pitch a little differently, but at the end of the day it’s the same ball and the mound is the same distance, and the bases are (in) the same places,” he explained. "But yeah, it’s starting to get used to how they pitch, how they do things, how they attack hitters. I’ve just got to be better, to be honest. I’ve got to be better, and I will be better. I’m looking forward to continuing to learn the league, for sure.”

Asked if he had a message for Mets fans about staying patient, Lindor laughed.