The well-traveled Sungjae Im learning to stay in one place 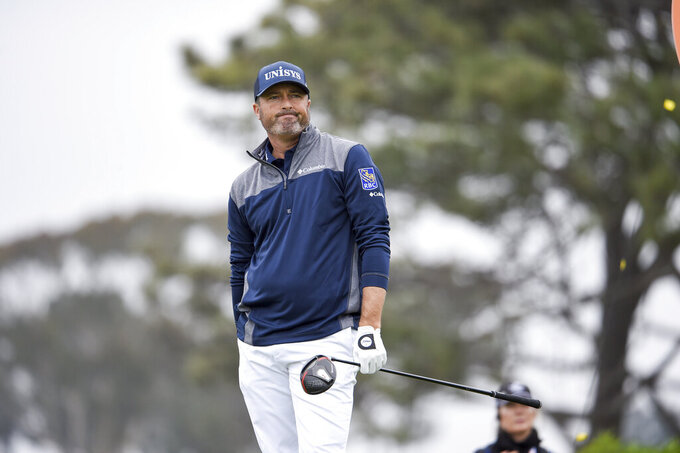 FILE - In this Jan. 26, 2020, file photo, Ryan Palmer hits his tee shot on the fifth hole of the South Course at Torrey Pines Golf Course in San Diego, during the final round of the Farmers Insurance golf tournament. Palmer is a member at Colonial in Texas and is optimistic about the PGA Tour resuming its schedule there.(AP Photo/Denis Poroy, File)

Sungjae Im has played in nine countries and 19 U.S. states since his rookie season on the PGA Tour, moving from hotel to hotel during the most prolific schedule among top players in golf.

Being in one spot for so long because of the coronavirus pandemic is an adjustment. Im has been staying with a family friend in Tampa, Florida, since the tour shut down on March 13.

Just don't get the idea the 22-year-old South Korean is bored. He still plays just about every day.

“It's fortunate the golf courses here have not been shut down during this crisis,” Im said in an email Q&A.

The time away from travel and the routine of tournament week — practice, pro-am, competition — has allowed him to experience some of the finer aspects of Florida life.

“I have never fished in my life before, but I went several times during the break and it was pretty exciting,” Im said. “Caught some catfish! Next time I would like to try deep-sea fishing and catch something bigger!”

Im is one of the emerging young starts on the PGA Tour. He reached the Tour Championship and was voted rookie of the year last season, went 3-1-1 with three partners in his Presidents Cup debut at Royal Melbourne, won his first PGA Tour title at the Honda Classic and finished third the following week at Bay Hill.

He is leading the FedEx Cup whenever the season resumes, currently targeted for June 11-14 at Colonial. But he hasn't had this much time away from tournament golf since 2016, his first season on the Japan Golf Tour.

His longest streak is 10 consecutive weeks the following year on the Japan Golf Tour. On the Korn Ferry Tour, he played 17 consecutive weeks (including majors). Since joining the PGA Tour, the most he has played is six in a row.

So yes, he misses the competition.

His parents are with him in Tampa. Im has an older brother in South Korea, and he says he is doing well. Im said his coach came over from South Korea a few weeks ago and they spent a lot of time together.

“We have a great relationship-friendship, and it's been nice having him here. Spent some quality time together on and off the golf course,” Im said. “I have been playing golf almost every day, so I'll be ready once a date is set.”

He has much to gain. The tour has said if it can start in June and play the schedule it has planned, that would be 36 events for the season, which it has deemed ample for the FedEx Cup. Im has a 55-point lead over Justin Thomas and a 279-point margin over Rory McIlroy.

“I feel good about my current FedEx Cup position and feel like I have earned it up to this point,” he said.

He might even buy a house and “settle down." Among the possibilities is Atlanta.

“I have practiced at TPC Sugarloaf before and the neighborhood there is clean and quiet,” he said. “Korean restaurants are not too far away and the Atlanta airport offers nonstop flights to nearly every tournament site (also a direct flight home to Korea)."

He might even find a few good fishing spots.

Ryan Palmer won't have to travel far if the PGA Tour is able to hold to its new schedule of starting at Colonial. He lives in Fort Worth, Texas, and is a member at Colonial. He said he was optimistic it would be played June 11-14 as the tour's first event since shutting down because of the COVID-19 pandemic.

Palmer said Tuesday he expects a strong field because everyone is eager to play. The biggest adjustment might be playing without fans, which is likely to be far more strict than the first time he experienced that.

He was at the 2012 AT&T National when a powerful wind storm toppled trees at Congressional and the PGA Tour decided not to allow spectators for the third round. Palmer recalled how odd it was to hear his name announced on the first tee with no around, or going through the motion of tipping his cap after a good putt before realizing no one was watching.

“I remember Tiger somehow ended up with a thousand fans — with no fans,” Palmer said. That was a slight exaggeration. Woods, the tournament host who wound up winning, had 73 people with him at one point.

Palmer echoed what others have said. No fans will make it feel like playing in college again.

“It's a matter of enjoying the walk, enjoying being outside,” he said. “It's an odd feeling for sure.”

Dean Wilson knows both sides of it.

Wilson played before a full house at Colonial for the opening two rounds of 2003, mainly because he was playing alongside Annika Sorenstam, the first woman in 58 years to compete on the PGA Tour.

Three years later, Wilson was in the first group off Thursday in the Ford Championship at Doral. He shot 66 and spoke later about how pleasant it was to play in calm, quiet conditions with no one around.

He was asked facetiously if it reminded him of Colonial.

Sorenstam missed the cut in 2003 and thousands of people didn't bother returning.

Four players have won back-to-back in what is now the Zurich Classic of New Orleans since it began in 1938, a group that includes Byron Nelson and Tom Watson.

It also includes Bo Wininger, who served in the U.S. Naval Air Corps during World War II and went to the same Oklahoma high school as Mickey Mantle.

Wininger won three times on tour before leaving to work in public relations, only to return a few years later and win the Greater New Orleans Open Invitational in 1962 and 1963, both times with Bob Rosburg as runner-up. In his bid for three in a row, Wininger was disqualified after the third round in 1964.

Michelle Wie West has her share of superstitions, some involving fashion. She never wears all white. She won't wear pink on Fridays. And when it comes to missing the cut, it's all about, well, the cut.

She won't use scissors until the weekend.

“I was on the range once and I wasn't thinking about it,” she said during an Instagram Q&A with Golf Channel last week. “It was after the fact. I was on the range before a round and I had to cut a towel. I cut the towel and missed the cut by one stroke. And I was like, ‘Never again using scissors or cutting things.' I can rip them off, but not cut them.”

Thomas Bjorn has been appointed to the European Tour board as a non-executive director. This is his 25th consecutive season on the European Tour. Bjorn, before he was Ryder Cup captain for the 2018 matches, served as chairman of the tournament committee for 10 years. ... Among the items former PGA Tour Commissioner Tim Finchem plans to for his space at the World Golf Hall of Fame is a letter from Arnold Palmer. He wouldn't disclose what was in it except to say “it's one of the coolest things that I have in my office.” ... The Korn Ferry Tour also hopes to resume June 11-14 with a new, one-time tournament on the Valley Course at TPC Sawgrass with no fans.

The PGA Tour has played 22 events this season and has 50 players who have earned $1 million or more.

“The first couple of weeks I was really motivated and working out at 10 a.m. Now I’m like, ‘Man, I don’t want to do anything other than eat popcorn.'” — Michelle Wie West, who is pregnant with her first child, on her stay-at-home routine.