West preview: It'll be a wild race for eighth — and ninth 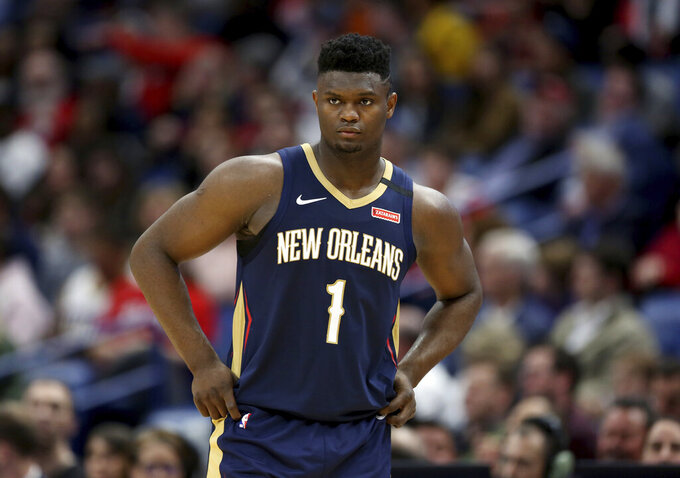 LAKE BUENA VISTA, Fla. (AP) — Add this plot twist to an unusual NBA season: To get the No. 8 seed in the Western Conference, a whole bunch of teams will enter the final two weeks of the regular season trying to finish ninth.

All the drama in the West when the NBA season resumes at Walt Disney World on July 30 after a 4 ½-month break because of the coronavirus pandemic will come from the bottom of the standings and the race just to get into the playoffs.

Memphis comfortably holds eighth place, which ordinarily would mean a playoff berth. But not this year, not with five teams with realistic chances of forcing a play-in series by finishing ninth and within four games of the team in eighth — which, barring a collapse, would be the Grizzlies.

“We obviously know our eight-game seeding schedule is going to be a challenge,” Memphis coach Taylor Jenkins said. “All teams playing for playoff positioning, getting into the playoffs ... I mean, we’re going to have high-competitive games.”

If the Grizzlies go 5-3 in their seeding games, they’re assured of no worse than a spot in the play-in series — a best-of-two matchup between the No. 8 and No. 9 teams when the regular season ends, provided the No. 9 team is within four games of eighth. The No. 9 team would have to go 2-0 in that series to advance.

The challengers all have a storyline.

San Antonio is aiming to become the first team in NBA history to make 23 consecutive postseason appearances. Sacramento is aiming for its first playoff trip in 14 years; Phoenix is aiming for its first playoff spot in 10 years, with those droughts the longest in the history of each franchise. New Orleans is trying to get in and extend J.J. Redick’s streak of making the playoffs in every season since his freshman year of high school. Portland is seeking a seventh consecutive postseason spot.

Add it all up, and inside the bubble, there’s going to be a sprint to the finish in the West.

“The mark of success for us was going to be to play meaningful games in March and April,” said David Griffin, the executive vice president of basketball operations for the New Orleans Pelicans. “This is now going to be meaningful games in July and August, but we’re going to get to do that. That was important to us because of our young core.”

The Los Angeles Lakers need a combination of three wins or Los Angeles Clippers losses to clinch the No. 1 spot out West — assuming the Lakers don’t go 0-8 at Disney while the Denver Nuggets go 8-0. The Lakers, Clippers and Nuggets have clinched playoff berths, as have Utah, Oklahoma City and Houston. Dallas needs only one win in its final eight games to wrap up the No. 7 seed, so that realistically leaves six teams for the one remaining playoff spot.

Only Minnesota and Golden State failed to make the restart out of the West.

New Orleans rookie Zion Williamson, who has missed much of the practice window at the restart because he left the bubble to tend to a family situation, has scored 448 points in his first 19 games. He’s the 14th player in NBA history to have at least that many points in the first 19 appearances of his career, and the first to do so since Michael Jordan (486 points) in 1984-85. As of Friday, Williamson had not yet returned to the bubble.

The Lakers should be the No. 1 seed for the first time since 2010 — which was also the season in which the Lakers won their most recent championship. The Lakers have reached the NBA Finals in each of the last four seasons where they have entered the playoffs as the No. 1 seed out West.

It’s possible — and if there’s a play-in series, very possible — that a losing record will be good enough to get into the West playoffs for the first time since 1997. That year, Minnesota, Phoenix and the Clippers all got into the postseason despite finishing the regular season below the .500 mark. Memphis is 32-33 going into the restart and all five of the other still-contending clubs for that last spot are already at least eight games below .500 with eight games remaining.