What kindness brought to folks featured in 'One Good Thing' 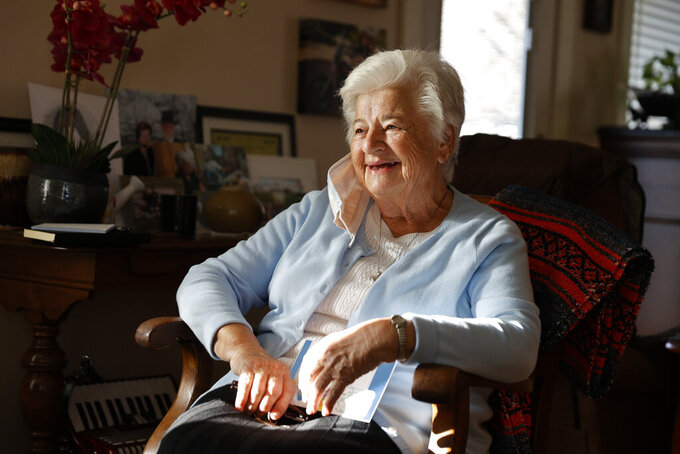 FILE - In this Nov. 12, 2020 file photo, Marjan Martin Curtis poses at her home in Spanish Fork, Utah. The 79-year-old widow, who has Stage 4 cancer, formed a fast and unlikely friendship with Amy Baird after Baird spotted Curtis' gorgeous gardening efforts along a nearby county road. (AP Photo/Jeff Swinger)

In 200 stories over this pandemic-ridden year, The Associated Press has celebrated selfless people who have given of themselves in trying times.

The stories have warmed hearts of readers around the world. But we've also heard from people spotlighted in the series — launched last March as “One Good Thing” — who reported that lives had been profoundly affected by the attention they received.

There was the Texas principal whose school runs a free store providing food and goods to the community and who wrote to say a talk show wanted to book a teenager featured in the AP's story. The volunteer tutor for isolated students who said even her doctor called with congratulations. The manager of a New York City initiative to get meals to Holocaust survivors who reported that calls, volunteers and thousands of dollars in donations had flooded in.

Here are excerpts from a few of our favorite follow-up notes.

“We have to remember that life is precious and wonderful. There is so much beauty everywhere, both nature and people,” wrote Marjan Curtis.

The 79-year-old widow battling Stage 4 cancer had planted hundreds of tulips along a road in Spanish Fork, Utah, leading to a fast friendship with Amy Baird, an adjunct university professor who was moved by the explosion of color while driving past.

After the story was published in November, Curtis heard from long-lost friends and colleagues who saw it and got back in touch. She also heard from strangers: A woman in Florida sent her a gift of tulips that change color in the light; a Colorado man sent a book about his father’s work saving Jewish people from Nazis in Amsterdam during World War II (Curtis’ family had hidden children in their barn in her native Netherlands, as the story recounted.)

A woman from Baird's book club who helped Curtis plant tulips last fall brought her a meal and visited her on Thanksgiving.

“I think that we do need each other, everywhere," Curtis said. "It is this human touch and care for another that makes life meaningful.”

In August, we brought you Tammi Truax, the Portsmouth, New Hampshire, poet laureate who writes weekly pandemic verses for her community newsletter.

A trip by Portsmouth residents to sister city Nichinan, Japan, was scrapped due to the pandemic, so Truax had written a poem honoring nursing students whose graduation they had planned to attend. A Japanese newspaper followed up on the AP story, publishing its own piece on Truax including a photo of the school’s principal holding a copy of the poem at their delayed ceremony.

“Thanks again for dropping the ‘pandemic poet’ pebble in the pond. Such wide-ranging ripples!” Portsmouth public information officer Stephanie Seacord wrote to AP. “May the new year be much brighter and more hope-filled.”

Emiliano Moscoso, a restaurateur delivering meals to poor families in the Colombian capital of Bogota, among them Venezuelan refugees, said the April story helped him expand his “Solidarity Menu” project.

It also caught the eye of members of the respected initiative “Colombia Takes Care of Colombia.” They asked him to join their work blunting the coronavirus' impact on low-income communities.

“What was amazing,” Moscoso wrote, “is that the story gave this project so much credibility.”

Bonnie Matthews' 6-year-old son Chip got a birthday gift of $2 from mail carrier Tawanna Purter after the two struck up an unlikely pandemic friendship. She reached out to say the AP's November article and video made the holidays “so much more special.”

The Opelika, Alabama, family heard from relatives and friends all over, and strangers sent well-wishes and small amounts of money for both Chip and older sister Bennett, 8.

After Matthews lost her job as a counselor at a private school that had allowed for her kids to attend, the “kindness, grace and love” the family experienced reaffirmed her faith in a divine plan — if not for the pandemic, Chip would have been in school and wouldn’t have met Purter.

Chip still looks for her each day from the window. Purter invited the two kids to her son Joshua’s birthday party in December, and a playground play date is in the works.

“You have truly impacted my family, and obviously many around us nationwide," Matthews wrote.

“The Matthews family is forever grateful and blessed by your desire to share those stories. May the Lord bless your family throughout 2021 and beyond.”

Former Colorado Rockies and Pittsburgh Pirates manager Clint Hurdle was overjoyed by the response to April's story on the daily notes of inspiration, encouragement and wisdom he was sending to some 5,000 subscribers.

“Yahoooo!” he texted the reporter.

He gained more than 3,700 new followers after the story was published, Hurdle said.