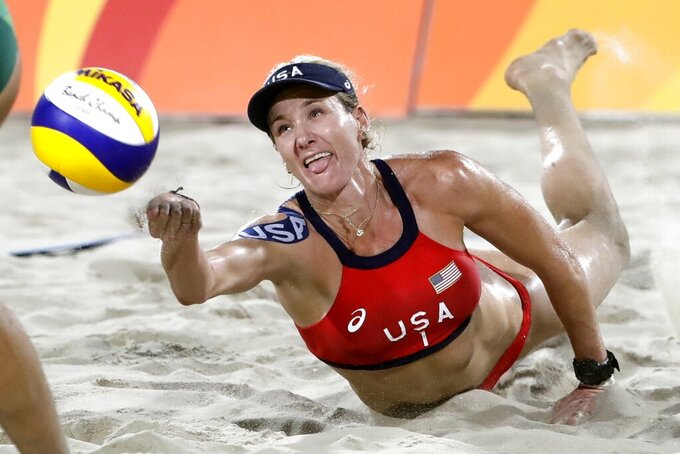 FILE - In this Aug. 17, 2016, file photo, United States' Kerri Walsh Jennings digs for a ball while playing Brazil during the women's beach volleyball bronze medal match of the 2016 Summer Olympics in Rio de Janeiro, Brazil. The volleyball star created a virtual summer camp in 2020 for young volleyball players and others seeking to stay active during the coronavirus pandemic. (AP Photo/Marcio Jose Sanchez, File)

Defying a wave of layoffs that has sent the U.S. job market into its worst catastrophe on record, at least one major industry is making a comeback. Tens of thousands of auto workers are returning to factories that have been shuttered since mid-March because of fears of spreading the coronavirus.

The auto industry is among the first major sectors of the economy to restart its engine.

About 133,000 U.S. workers — just over half of the industry’s workforce before the pandemic — are expected to pour back into assembly plants that will open in the coming week, according to estimates by The Associated Press. A staggering 36 million people have now sought jobless aid in just the two months since the virus first forced businesses to close and shrink their work forces.

Here are some of AP’s top stories Friday on the world’s coronavirus pandemic. Follow APNews.com/VirusOutbreak for updates through the day and APNews.com/UnderstandingtheOutbreak for stories explaining some of its complexities.

__ President Donald Trump expressed no concerns Friday about a rapid coronavirus test the White House has been relying on to ensure his safety, despite new data suggesting the test may return an inordinate share of false negatives. A preliminary study by New York University researchers reported problems with the test Trump and his deputies have have promoting as a “game changer.”

__ Brazil’s health minister resigned after less than a month on the job in a sign of continuing upheaval in the nation’s battle with the COVID-19 pandemic and President Jair Bolsonaro’s pressure for the nation to prioritize the economy over health-driven lockdowns. Nelson Teich’s resignation was confirmed by the Health Ministry.

__ American industry suffered the most severe plunge on record last month with factories, mines and utilities battered by the coronavirus pandemic. The Federal Reserve said Friday its industrial production index tumbled a record 11.2% in April.

__ French nurses and doctors faced off with President Emmanuel Macron at a leading Paris hospital. They are demanding better pay and rethinking of a once-renowned public health system that was quickly overwhelmed by tens of thousands of virus patients. A nurse confronted Macron at the Pitie-Salpetriere Hospital, saying she’s using a long-expired surgical mask and would like a pay raise, not a bonus. Medics peppered him with grievances.

__ Shuttered sectors of New York’s upstate economy will begin inching back to life Friday with more construction, manufacturing and curbside retail pickups allowed in parts of the state miles away from pandemic-stricken New York City. The smaller cities and rural regions of upstate New York have been spared the brunt of the coronavirus outbreak. Gov. Andrew Cuomo is allowing those areas to gradually reopen first, industry by industry.

__ Along the California coast and in states known for silky sands and ample sun, the surf is up along with a new set of rules to prevent the spread of coronavirus. Los Angeles County beaches reopened this week requiring masks on the beach and rules that people be exercising or moving.

__ An American cargo pilot who acknowledged “poor judgment” in breaking a quarantine order to buy medical supplies became the first foreigner imprisoned in Singapore for breaching its restrictions meant to curb the coronavirus. FedEx pilot Brian Dugan Yeargan, of Alaska, was sentenced to four weeks Wednesday after he pleaded guilty to leaving his hotel room for three hours to buy masks and a thermometer, says defense lawyer Ronnie Tan.

__ 1,458: Few states are rebooting from the coronavirus pandemic quicker than Texas, where stay-at-home orders expired May 1. Infections are still rising, including single-day highs of 1,458 new cases and 58 deaths on Thursday. Republican Gov. Greg Abbott has defended the pace by emphasizing steadying hospitalization rates and pointing out Texas’ 1,200 deaths are still behind similarly big states, including California and Florida.

__ BE ACTIVE: Beach volleyball star Kerri Walsh Jennings knew the national stay-at-home orders would be especially hard on young athletes and others trying to stay fit. With her own quest for a sixth Olympics on hold because of the coronavirus pandemic, Walsh Jennings held video chats with dozens of volleyball clubs and teams — more than 4,500 people in all — with a message to remain active.

__ SONG CONTEST SILENCED: Over its many years, the Eurovision Song Contest has come to be a sign of the times. So it is perhaps fitting that, in coronavirus times, nothing will be happening Saturday at the scheduled venue of the Ahoy Hall in the Dutch port city of Rotterdam.