Where seniors would have walked to graduate, names in chalk 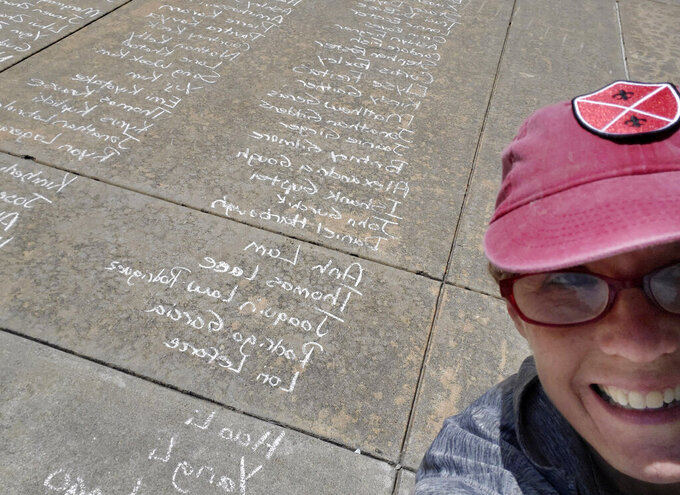 In this May 8, 2020 photo, Kim Gaddie, an Associate Senior Fellow at Headington College, takes a selfie photo of herself with a long list of University of Oklahoma graduate names written on the sidewalk outside of the Gaylord Family-Oklahoma Memorial Stadium in Norman, Okla.. Gaddie and several staff members spent hours writing more than 4,000 names of the 2020 graduates who were unable to have their in-person commencement ceremony due to COVID-19. (Courtesy of Kim Gaddie via AP)

As the pandemic upended commencement rituals across campuses, Kim Gaddie wanted to give the University of Oklahoma’s class of 2020 a taste of tradition -- well, kinda.

Armed with boxes of chalk, Gaddie, her husband and a few colleagues spent hours writing the names of graduating seniors on the concrete sidewalk where class members would have lined up to march into the ceremony. By the time they were done, the pathway was festooned with more than 4,000 colorful names.

“I was thinking to myself, ‘Wow, they’re not going to get a chance to do that, another tradition that won’t get to be fulfilled after four years of hard work,’” said Gaddie, associate senior fellow at the university’s Headington College. “It was just a small gesture that we felt like we could do for them to say, ‘Hey, we’re thinking about you. We care about you. We know this is important.’”

Feedback was instant. Students and parents who happened to be on campus took note. They searched for names and snapped photos.

“Everyone was just like, ‘Wow, that is incredible,’” she said. “It was just really cool to see and it was evident that it really did make an impact for a lot of students.”

For the Gaddies, the gesture was personal in more ways than one. They have known some of the graduating seniors for years “like our family,” said Keith Gaddie, President’s Associates Presidential Professor at the university and senior fellow of Headington College.

“Everybody wants to be remembered and thought of,” he said. “They miss being here.”

Then, there was their actual family: Their daughter was one of those graduating that day in a virtual ceremony. When she found out what her parents had done, “she was really impressed,” Kim Gaddie said.

She wasn’t the only one.

Dana Antinozzi was in Texas when a friend sent her a photo of her name in chalk. She was particularly moved that people she didn’t know put that much time and effort to give her and fellow class members that recognition.

“I can only imagine what back-breaking work that must have been,” she told the Gaddies in a thank-you email. “It is clear that faculty members like you are doing all you can to make this milestone memorable and special for us.”

Another graduate, Lauren Hansen, said the gesture made “my whole year.” She lives near campus so, on Twitter, she offered to take and send photos to those who ask. More than 30 people -- friends and strangers, graduates and parents -- took her up on the offer, she said.

Hansen’s family had plans to fly from Utah for her commencement. The hardest part for her, she said, was picturing all what would have been but wasn’t.

But “I got to go over and see my name and, you know, stand there and see where I would have stood to walk into our graduation ceremony,” she said. “It really meant a lot.”

While nonstop global news about the effects of the coronavirus have become commonplace, so, too, are tales of the kindness. “One Good Thing” is a continuing series of AP stories focusing on glimmers of joy and benevolence in a dark time.