White Sox OF Robert looking to build on impressive debut 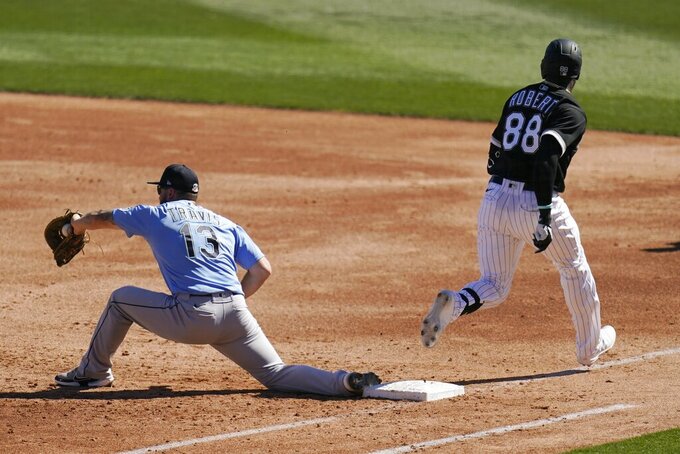 The hype arrived before Luis Robert made it to the major leagues, and he showed why during an impressive debut with the Chicago White Sox.

Looking for an even better encore, Robert is working on pitch recognition at the plate, and he wants to put everything he learned last summer to good use. That will work quite nicely for a White Sox team with championship aspirations.

“Humble guy who just likes to let his play speak for him,” manager Tony La Russa said. “But he's exciting.”

The 23-year-old Robert was back in center Wednesday, a day after he missed his second straight spring training game because of a lower abdominal strain. He played six innings against the Los Angeles Dodgers and went 0 for 3 with two strikeouts.

The Cuban slugger said before the game that he felt good, brushing off the injury like a routine fly ball.

“I just started feeling it like four or five days ago,” he said through a translator. “I don't know how it happened.”

La Russa said Robert passed all the team's tests before returning to the lineup. He batted sixth against Los Angeles, but La Russa indicated he could show up in a couple different slots during the regular season.

“Because of his speed, there isn't any place that you can't put him,” La Russa said. “I think, sometimes, if he's really hot, you give him an extra at-bat in the two spot, or leadoff if Tim (Anderson) takes a day off. Hitting in the middle of the lineup, he’s going to have plenty of chances to drive in runs and score runs.”

A year ago, Robert was one of baseball's top prospects heading into his first season in Chicago. He signed a $50 million, six-year deal before his big league debut.

When the season finally started in July amid the COVID-19 pandemic, Robert collected at least one hit in 13 of his first 15 games. After struggling in September, he finished with a .233 batting average, 11 homers, 31 RBIs and nine steals in 11 attempts. He also became the second rookie in franchise history to win a Gold Glove, joining Tommie Agee in 1966.

Chicago made it to the playoffs for the first time since 2008, and Robert hit .308 (4 for 13) with a massive homer during its first-round loss to AL West champion Oakland. He finished second to Seattle center fielder Kyle Lewis in voting for AL Rookie of the Year.

With his bat and his glove, Robert looked like a budding star at times. But it was clear there was room for growth, too, and Robert has been working on pitch recognition this spring.

“I’ve been doing that and I think that’s the reason I’ve been feeling so comfortable right now.”

Robert reached on an error in his first at-bat against Los Angeles, but he was thrown out when he tried to steal second. He struck out with a runner on in the fourth and the sixth.

Even with the empty day against the Dodgers, Robert is hitting .296 (8 for 27) this spring. He homered during Saturday's 6-5 victory over the Angels.