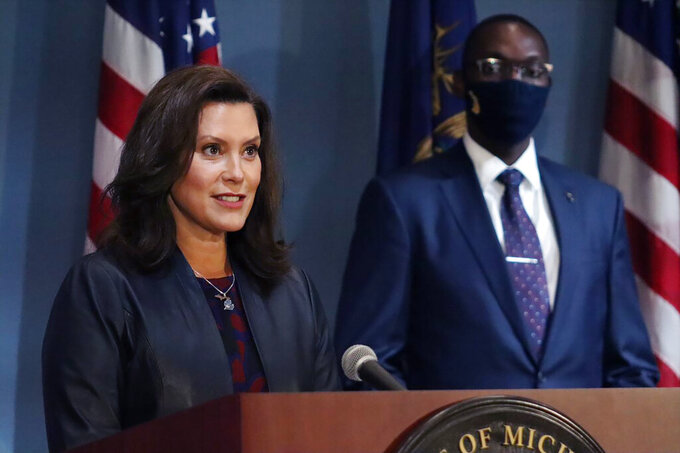 In a photo provided by the Michigan Office of the Governor, Gov. Gretchen Whitmer addresses the state during a speech in Lansing, Mich., Wednesday, Sept. 2, 2020. The governor said she will make an announcement on reopening gyms and clarifying the standing of high school and other youth sports "very soon," saying she knows many are anxious about their status amid the coronavirus pandemic. (Michigan Office of the Governor via AP)

LANSING, Mich. (AP) — Gov. Gretchen Whitmer said Wednesday she will make an announcement “very soon” on the reopening of gyms and clarifying the standing of high school and other youth sports, noting that she is aware many are anxious about their status amid the coronavirus pandemic.

The governor has kept fitness centers, movie theaters, bowling alleys, ice skating rinks and similar businesses closed since March, except in much of northern Michigan, where they were allowed to reopen in June. She said she wants to “get the protocols correct" and “I think we've got an idea of what that looks like.”

An announcement is expected as early as Thursday. Frustrated business owners have noted that their counterparts are now open in all but a few states, while Whitmer has contended that her approach has contributed to Michigan being in strong position with COVID-19 relative to the rest of the U.S. after being one of the hardest-hit states early in the pandemic.

Over the past two weeks, the state's 104.2 new cases per 100,000 people ranks 15th-lowest, according to Johns Hopkins University.

“We have to get this right,” Whitmer said at a news conference. “We take this very seriously. The decisions that I will make in the coming days and announce are made in a way that will be protecting athletes and families and coaches and parents and patrons — our small business owners as well. People's lives are at stake. COVID is still a very real threat all across our state.”

The Michigan High School Athletic Association recently postponed the football season until the spring. Three other fall sports — soccer, volleyball, and swimming and diving — are in limbo outside of less-populated northern counties because of an order closing indoor gyms and pools and requiring athletes to stay 6 feet apart.

Senate Majority Leader Mike Shirkey, a Republican, criticized Whitmer for not yet letting all businesses reopen, saying he is particularly “befuddled” that cinemas are still closed.

“I don't believe there are any businesses in Michigan that should remain closed," he told The Associated Press. "I believe that we've learned a lot since this insidious virus hit our shores, and no business owner wants to put their employees, their customers or their families at risk.”

He said there is a “dearth of trust” in the business community, and “we should let them do what they need to do and prove that they know how to react and take care of” people.

Also Wednesday, Huntington Bankshares joined Whitmer to announce a $5 billion, five-year lending, investment and philanthropic commitment in Michigan. Sandy Pierce, a senior executive vice president at the company, said it will place a special emphasis on lending to businesses owned by minorities, women and veterans. Another focus is expanding homeownership for minorities and low- to moderate-income borrowers.

The state health department also announced that more than 20 additional free COVID-19 testing sites will open in coming weeks. Spots were chosen in part to help address the virus' disproportionate impact on racial and ethnic minorities.

Khaldun said she expects the state will be able to publicly post the names of schools with outbreaks within the next two weeks. Many schools have already opened, with the rest starting next week.

Earlier Wednesday, Whitmer met with Dr. Deborah Birx, the coordinator of the White House coronavirus task force. Birx was “very impressed” with Michigan's handling of the outbreak, said Whitmer. She said she reiterated to Birx the need for a national mask mandate and expressed concern that the Centers for Disease Control and Prevention had posted new guidance saying it is not necessary for people in close contact infected people, but who do not feel sick, to get tested.

Birx told reporters outside a Livonia hospital that residents should be cautious over the Labor Day weekend.

“Please, wear your mask,” she said. “When I say socially distance, it means at all times, including with family members that you may not have seen for a few weeks, including with the neighbors down the street. It is really important because we are seeing that crowded neighborhood events, including backyard barbecues, are currently one of the primary spreaders of virus.”