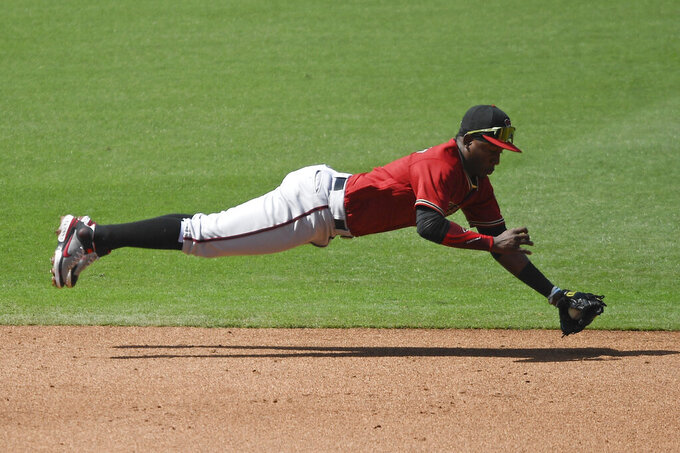 Arizona Diamondbacks Geraldo Perdomo makes a diving stop on a ball hit by San Diego Padres' Wil Myers during the fourth inning of a baseball game Sunday, April 4, 2021, in San Diego. Perdomo got the out at first base. (AP Photo/Denis Poroy)

Widener (1-0) held the Padres to three hits while striking out five and walking three.

It was Widener's first start after making 12 relief appearances during the pandemic-shortened 2020 season. He made his big league debut on July 25 with 1 2/3 scoreless innings in Arizona's 5-1 loss to the Padres at Petco Park.

The Padres avoided a shutout when Fernando Tatis Jr. hit his first homer of the season with two outs in the ninth, off Chris Devenski, who got the save.

Widener got the start after Zac Gellen hurt his right forearm late in spring training. He got ahead of Padres’ batters and went the longest of any Diamondbacks starter so far.

“Anytime you can get a win it feels pretty good, so especially with it being my first time starting it feels really good to get the win," he said.

“When I was warming up I was looking in the stands and I was so excited to see people again that I didn’t really think about anything besides just how happy I was to hear people screaming again," he said.

Widener was hit on the right leg by Jake Cronenworth's comebacker with one out in the first but stayed in the game and got out of the inning on five pitches.

He worked his way out of a jam in the second, when the Padres had runners on the corners with no outs. He struck out Wil Myers and Luis Campusano before intentionally walking Jurickson Profar to get to Padres starter Chris Paddack, who took a called third strike.

Five Arizona relievers combined to hold San Diego to three hits and one run in the final three innings. After Joakim Soria issued consecutive two-out walks in the eighth and then left with an injury, Kevin Ginkel came on and struck out Campusano to get out of the jam. Ginkel played at El Capitan High in suburban Lakeside.

Widener “went out and just put us on his back and gave us six scoreless innings," manager Torey Lovullo said.

“It was exactly what been talking about having our starters do,” the manager added. “We haven’t gotten a lot of length out of our starters. For him to step up and do what he did after losing the first three games of the season, that’s not an easy chore. Typically young pitchers put a little bit too much pressure on themselves and they might not execute as precisely as he did today. For him to block all that out and go out and make pitches the way he did, it was a solid day for him.”

Paddack (0-1) had a frustrating season debut. He gave up three runs, two earned, on four hits in four innings, struck out three and walked three. Paddack was San Diego's opener day starter in 2020 but struggled and is now No. 4 in the rotation behind newcomers Yu Darvish, Blake Snell and Joe Musgrove.

Paddack got into trouble early and needed 28 pitches to get through the first. He allowed a one-out walk to Ketel Marte and a single to Christian Walker before Peralta tripled to right.

Josh Rojas walked to open the third and eventually scored on Tatis' wild throw, the shortstop's fifth error this season.

Marte had a sensational series, going 9 for 16 with 3 runs scored and three RBIs. He had four hits in an 8-7 opening day loss on Friday.

Diamondbacks: Lovullo said is showing signs of a strained left calf and will return to Phoenix for tests. ... Walker was back in the lineup at first base with a black eye after coming out of Saturday night's game when Rojas' throw from shortstop bounced and hit him on his left cheek.

Diamondbacks: RHP Luke Weaver (1-9, 6.58 ERA in 2020) is scheduled to make his season debut Tuesday night in the opener of a three-game series at Colorado, which will counter with Germán Márquez (0-0, 2.25).

Padres: LHP Adrian Morejon (2-2, 4.66 in 2020) is scheduled to make his season debut Monday night in the opener of a three-game series against San Francisco, which will counter with RHP Anthony DeSclafani (1-2, 7.22 in 2020 with Cincinnati).