Will history repeat itself in 2 congressional rematches? 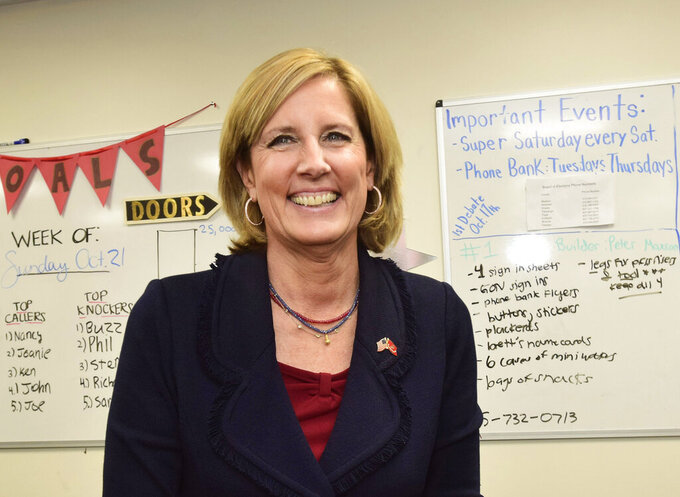 FILE - In this Oct. 23, 2018, file photo, U.S. Rep. Claudia Tenney, R-N.Y., poses at her campaign headquarters in New Hartford, N.Y. Tenney is vying to reclaim her seat in Congress from U.S. Rep. Anthony Brindisi, the Democrat who ousted her by fewer than 4,500 votes two years ago(AP Photo/Heather Ainsworth, File)

BINGHAMTON, N.Y. (AP) — It’s like 2018 all over again for voters in central New York, where two U.S. House members — one a Republican, the other a Democrat — are locked in close rematches against candidates they narrowly beat against the odds two years ago.

In the Republican-leaning 22nd Congressional District — which stretches from Lake Ontario to the Pennsylvania border, east of Syracuse — Republican Claudia Tenney is vying to reclaim her seat in Congress from U.S. Rep. Anthony Brindisi, the Democrat who ousted her by fewer than 4,500 votes two years ago.

Brindisi, 41, is one of several vulnerable freshman House Democrats in districts where voters favored President Donald Trump over Hillary Clinton in 2016, and whose impeachment votes invited attack ads early this year.

And just to the west in the 24th Congressional District, where 35% of voters are Democrats and 32% are Republicans, Democrat Dana Balter is again running against Republican U.S. Rep. John Katko as he seeks a fourth term.

Both races are expected to be close again amid circumstances that have changed since the last time. The coronavirus pandemic has smashed the economy and killed thousands. Cases have been spiking again lately in New York, especially near the Pennsylvania border.

And the two districts have seen sharp divisions over the issue of racial injustice and protests over police killings of Black people, including recent demonstrations in the nearby city of Rochester over the death of Daniel Prude.

“The candidates are in a very different position facing voters this time then they were two years ago,” said Siena College pollster Steve Greenberg.

Balter has been critical over Katko's support of Trump.

In 2016, Katko had told voters that "Donald Trump has not and will never earn my vote.” But he then endorsed the president's reelection in January.

At a debate Oct. 20, Katko said that he considered withdrawing that endorsement, but that the nation needs lower taxes, better trade deals and market-based health care.

“And that’s why I’m sticking with him, warts and all,” he said.

Balter said the problem with Trump isn't, as Katko suggested, that the president has occasionally “put his foot into his mouth.”

“It’s not about ill-advised word choices,” she said the debate. “It’s about his flagrant disregard for the well-being of Americans.”

Meanwhile, 59-year-old Tenney is urging Republicans to turn out and prevent Brindisi from ushering in a “far-left” agenda backed by Democratic presidential candidate Joe Biden.

She has portrayed him as obsequious to House Speaker Nancy Pelosi, criticized his vote to impeach Trump, and attended “Back the Blue” rallies as she lambasted Brindisi as “anti-police.”

Brindisi has said he wants to fund more police training and body cameras and has campaigned on the need for a stimulus bill to offset the damage being done by the pandemic.

“My worry is if we don’t pass another stimulus, the economy could fall into a tailspin,” he said recently during a campaign stop at a Binghamton gas station, where he learned to fill up a propane-fueled bus as workers spaced out in a circle asked for more investment.

Outside political groups have poured money millions of dollars into efforts supporting the candidates in both races.

Polling is scant, but a recent Siena College poll shows Brindisi running with a slight edge over Tenney and signs of disapproval among district Republicans with Trump, whose support Tenney has frequently touted.

Biden and Trump have been polling neck-and-neck in the district. In 2016, Trump carried the district over Clinton by 15 points.

Matthew Taft, an Endicott auto detailer at the Binghamton gas station where Brindisi campaigned, said he considered the Democrat “a little too liberal” and voted for Tenney in 2018. But the Republican said he’ll consider both November, adding: “I don’t like either of them.”

Another Siena poll has Balter and Katko nearly tied in their district, which includes Syracuse, where Biden has some history. He graduated in 1968 from Syracuse University College of Law, and his late first wife, Neilia Hunter, who died in a car crash, was a Finger Lakes native.

Balter, 44, also moved to central New York in 2003 to pursue a doctorate at Syracuse University, where she later worked as a visiting assistant professor. She grew up in Connecticut and pursued a career in disability services inspired by her childhood experience advocating for a brother with cognitive disabilities and has never held elective office before.

Health care has been a central issue in both districts.

Tenney also voted for an Obamacare repeal bill and said she’ll fight Medicare-for-All. As a state lawmaker, Brindisi supported single-payer health care but says he doesn’t support it nationally. He has advocated for lower prescription drug costs and for protecting Obama-era benefits for maternity and emergency room care and individuals with preexisting conditions.

U.S. Rep. Tom Reed, a Republican, faces Democrat Tracy Mitrano in the 23rd Congressional District. He defeated her in 2018 by about 8 percentage points.

Republican U.S. Rep. Elise Stefanik faces a challenge in the 21st Congressional District from Democrat Tedra Cobb, who she beat handily in 2018.

And U.S. Chris Jacobs, another Republican, faces Democrat Nate McMurray, who he defeated in a special election in June.