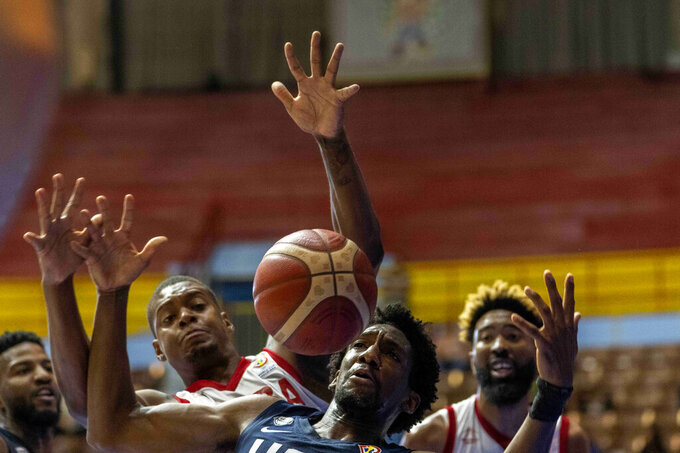 Langston Galloway of the U.S, fights for the ball with several Cuban players during the FIBA Americas qualifiers for the 2023 Basketball World Cup, In Havana, Cuba, Monday, July 4, 2022. The U.S. defeated Cuba 87-64. (AP Photo/Ramon Espinosa) 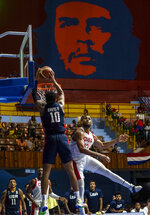 HAVANA (AP) — There were some cheers for “The Star-Spangled Banner” before USA Basketball’s game in Cuba on Independence Day.

And then the Americans celebrated the holiday with a big win.

Xavier Munford scored 24 points and the U.S. defeated Cuba 87-64 on Monday night to close the first round of qualifying for next year’s Basketball World Cup — improving to 31-1 all-time against the island nation.

“It’s emotional to play on the Fourth of July," said Jim Boylen, who coached the U.S. in all three of the two-game windows in the opening qualifying round. “It’s emotional to be here with this group of guys, with USA across our chests. It’s a big day. Our country is 246 years old today and we’re just thankful for this moment together.”

Munford was 10 for 12 from the floor for the Americans, who got 13 points from Justin Jackson, 12 from John Jenkins — all from 3-point range — and 10 apiece from Will Davis and Langston Galloway.

“It’s July 4th. No better feeling than to get a win tonight,” Munford said.

Jordan Bell finished with eight rebounds and six assists for the Americans, whose spot in the second round of qualifying was previously secured. They’ll take a 5-1 record into the second round, well on their way to clinching a spot in the World Cup and moving a big step closer toward getting USA Basketball qualified for the 2024 Paris Olympics.

The Americans will start the second round of World Cup qualifying on Aug. 25, with the expectation that the first matchup will be against Uruguay in Las Vegas. The U.S. will also play on Aug. 29, probably on the road and likely against Colombia, though FIBA has yet to confirm that as the matchup.

The two road wins on this trip — the Americans beat Puerto Rico on Friday — puts the U.S. in a prime position to qualify for the World Cup. The roster was primarily composed of G League players, as is always the case for the Americans in World Cup qualifying, and Boylen said this group came together quickly.

“We came together 11 days ago and our team was focused, our guys were great, we worked on the basics, we got better every day and I thought we played the right way,” Boylen said. “The ball moved, we grew together, and we cared for each other.”

The U.S. will be grouped with Brazil, Uruguay, Mexico, Puerto Rico and Colombia in the second round. Also grouped from the Americas region will be Venezuela, Argentina, Panama, Canada, the Dominican Republic and the Bahamas.

Cuba led 16-14 after the first quarter Monday night. That is, until the Americans scored 14 points in the first 2:19 of the second quarter.

“We lost the first quarter, but I thought the second quarter, we responded,” Boylen said.

A 3-pointer by Jackson opened the second quarter, put the U.S. ahead for good, and the Americans were off and running. The lead was 49-32 early in the third — ending what was a 35-16 run by the U.S. — and the Americans remained ahead the rest of the way.

“The Cuba team was great," Munford said. “They came out with a great effort. They made us work for it. They had strong guys. We played well tonight. We executed, took care of the ball, ran our offense and played USA style of basketball."