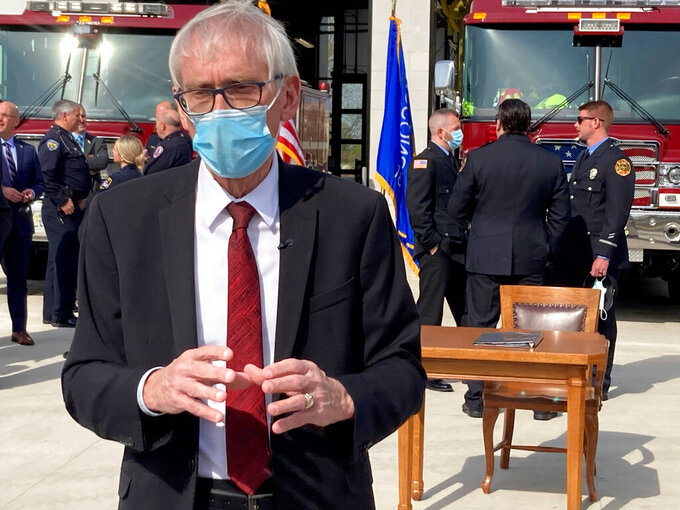 FILE - In this April 27, 2021, file photo, Wisconsin Gov. Tony Evers speaks with media at a news conference in Madison, Wis. Gov. Evers on Friday, May 14, 2021, praised new federal guidelines that relaxed mask restrictions for people who have been vaccinated for COVID-19, and he said his administration will review whether it is safe for state workers to return to their offices.(AP Photo/Scott Bauer File)

MADISON, Wis. (AP) — Gov. Tony Evers on Friday praised new federal guidelines that relaxed mask restrictions for people who have been vaccinated for COVID-19, and he said his administration will review whether it is safe for state workers to return to their offices.

The Centers for Disease Control and Prevention issued new recommendations Thursday saying the fully vaccinated can resume normal activities without masks except in crowded environments such as on public transportation or inside hospitals, prisons and homeless shelters.

During a ceremony outside the state Capitol on Friday to sign a bill recognizing May 14 as Hmong-Lao Veterans Day, Evers applauded the relaxed guidelines.

He said his administration would review the new recommendations and evaluate whether to bring state workers back to their offices en masse. He urged reporters not to focus on what he called the “minutiae" of the recommendations and instead celebrate them.

“We should be very happy that thousands and thousands of people in the state of Wisconsin have been vaccinated and given us this chance,” he said.

Republicans have blocked almost all of the Democratic governor's efforts to mount a statewide response to COVID-19. Since the pandemic began, GOP legislative leaders and allied groups have persuaded the conservative-leaning state Supreme Court to strike down Evers' statewide mask mandate, his stay-at-home order and his limits on gatherings.

The state's vaccination efforts picked up after getting off to a slow start. Infection rates have plateaued at levels that haven't been as low since last summer.

Local mask orders remain in place in some jurisdictions. Evers said local health officials will have to make their own decisions about whether to maintain those mandates.

The city of Milwaukee announced Thursday that it would lift gathering limits for businesses and events starting June 15 because cases were trending downward. Masks will still be required indoors, but health officials planned to discuss further steps in light of the CDC announcement but nothing had been decided as of Friday afternoon, said Emily Tau, a spokeswoman for the city's health department.

Health officials in Dane County, the state's second most populous county, said they're evaluating the recommendations and plan to update their current orders on Tuesday.

The governor encouraged anyone who hasn't been vaccinated to do so.

“I really hope those people take a good look at themselves today,” Evers said.

This story has been updated to correct that Milwaukee announced Thursday, not Friday, that it will lift its gathering limits.