Wisconsin vaccine hunters share how to get a COVID vaccine 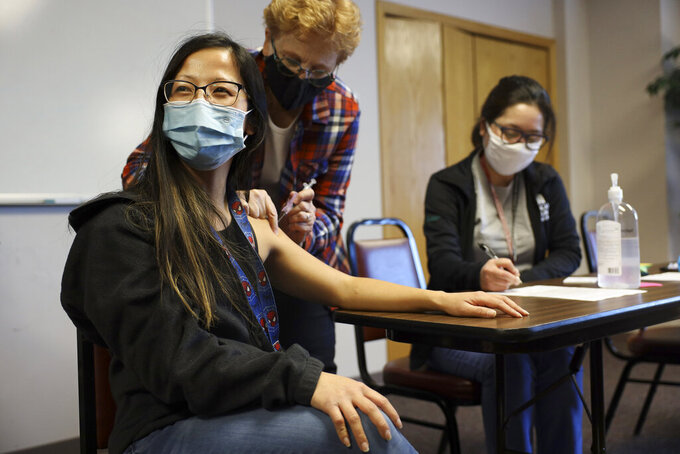 Lisa Xiong, a staff member at The Hmong Institute, gets her first dose of the Moderna COVID-19 vaccine at a clinic at Life Center in Madison, Wis., on March 9, 2021. "It wasn't as bad as I thought," she said after Laurel Losenegger, a volunteer nurse with the Benevolent Specialists Project, delivered the shot. (Coburn Dukehart/Wisconsin Watch via AP)

MADISON, Wis. (AP) — Robin Davis was thrilled to learn that Wisconsin deemed her family eligible for COVID-19 vaccinations starting March 1. That offered hope that she and her children could soon safely venture outside their Milwaukee home.

For the past year, the 56-year-old has mostly hunkered down with her son, 26, and daughter, 23 — both of whom are on the autism spectrum.

That has proved lonely and difficult, Davis said, but ultimately worthwhile. Her husband of 30-plus years died of pneumonia in 2019, and she fears catching COVID-19. She remains the legal guardian of her adult children, responsible for medical and financial decisions.

Davis has her own physical disabilities, and the family participates in IRIS, Wisconsin’s self-directed program for frail elders and adults with disabilities. That’s why all three qualified to receive vaccinations this month.

But Davis wasn’t sure how to book an appointment. The signup websites she found failed to demystify the process.

She joined the group and posted her story. That connected her with group founder Bob Orech, who said he made it his “personal mission” to find vaccines for the Davis family. Orech linked her to a Walgreens pharmacist he met through the group. Davis and both children received their first shots the next day.

“I think that’s one of the stories I’m most proud about,” said Orech, 47, a retail regional manager in Germantown, Wisconsin.

The fast-growing Facebook group has helped many Wisconsinites navigate the state’s COVID-19 vaccine bureaucracy. Wisconsin is among the nation’s leaders in distributing inoculations to those who want them, but demand still outpaces supply, and some eligible residents still struggle to find appointments.

The Facebook group is among dozens popping up nationwide in which members share insights for booking vaccinations. Some, like Orech, even schedule appointments for others. They are known as “angels.”

Orech started the group in late February after members of a Chicago Facebook group helped him find appointments for his parents in suburban Chicago. If that approach worked in Chicago, he figured, why not Wisconsin? As of March 11, about 2,700 people had joined the Milwaukee group.

Wisconsin has administered more than 1.8 million vaccines as of March 11. About one in five Wisconsinites has received at least one vaccine dose, and more than one in 10 is fully vaccinated, according to the Wisconsin Department of Health Services. Wisconsin Watch and WPR spoke to eight residents who received vaccines. Here are their insights.

Lisa Kirchberg, 67, didn’t have much trouble getting vaccinated in Milwaukee. Her health care provider — which is connected with Froedtert and the Medical College of Wisconsin — sent her a letter in February saying that she was eligible and could book an appointment over the phone.

She followed the instructions and received her first vaccine dose on Feb. 13 and scheduled her second shot for March 15.

“I really want this. I’ve never been afraid of it,” said Kirchberg, adding that she has closely followed COVID-19 protocols while living in a building with 500 people.

Each medical provider has its own system for booking vaccine appointments.

DHS maintains a searchable map of vaccine providers in Wisconsin, which displays vaccine registration websites for health care providers, county health departments and pharmacies. Some local governments offer their own portals to sign up.

But appointment slots can fill up fast. Orech said members of his group gleaned patterns revealing the best times to book at certain locations. Walgreens, for example, seems to begin accepting new appointments daily at 6 a.m., offering early birds a leg up. Other pharmacies like CVS, Walmart and Meijer are moving targets, Orech said.

Many websites require vaccine seekers to create an account. Orech suggests doing that early to shave off precious time once bookings open.

One supply chain worker in Madison qualified for vaccination on March 1 when Wisconsin expanded eligibility to non-frontline essential health care workers. The 24-year-old asked not to be named saying he feared negative attention from people who might deem him undeserving because of his age. He tried unsuccessfully for three days to schedule an appointment at a Walgreens in Madison.

On the fourth day — as he lay half-awake, acquiescing to his Australian cattle dog’s demand to go outside — he realized that scheduling an appointment in his hometown of Beaver Dam, Wisconsin, might be easier. He booked a Walgreens appointment there on his first try.

He said the hour-long drive last week was worthwhile. But he feels guilty about getting a shot while his father — who is younger than 65 but considered high-risk for COVID-19 — still is not eligible.

On March 11, Wisconsin announced it would expand vaccine eligibility to people with certain medical conditions beginning March 29. DHS expects to make all residents ages 16 and older eligible sometime in May.

Tom Kastle, a 64-year-old Madison folk singer, actor and tall ship sailor, earned much of his pre-pandemic income from concerts he played at nursing homes in and around Wisconsin. That businesses dried up as long-term care facilities — now linked to 30% of COVID-19-related deaths in Wisconsin — barred visitors to control spread of the disease.

A friend and fellow folk singer recently sent Kastle a postcard billing himself as “vaccinated, masked and performing live.” Another friend told Kastle that nursing homes were vaccinating their independent contractors. Kastle put two and two together. When a nursing home solicited him for a St. Patrick’s Day concert, Kastle asked about getting vaccinated. He received his first dose on Feb. 24.

Others have managed to score leftover vaccines.

Orech said his Facebook group members have called pharmacies at day’s end to ask for leftovers that might otherwise expire and be thrown away — due to missed appointments, for example.

“Pharmacists love their customers. They really do,” Orech said. “They look out for our families more than we ever realize it.”

Some vaccination sites offer standby lists for people who agree to show up quickly for a leftover dose. Other vaccine hunters have shown up to vaccination sites unprompted to inquire about extras near closing time. More than a million people have also signed up for extras through Dr. B, a nationwide web startup that matches people with local providers.

Many vaccine hunting tips involve time, technology and resources, illustrating how vulnerable communities could lose out. Hashim Zaibak, a founder and pharmacist at Hayat Pharmacy in Milwaukee, sees that problem clearly.

The limitations of poor internet access surfaced earlier in the pandemic, Zaibak said, when Gov. Tony Evers’ administration unveiled a COVID-19 testing registration website that required an email address. Hayat, which has more than a dozen locations, also offers testing to residents — some of whom lack access to a smartphone, email address or any internet access at all. Some do not speak English.

That’s why the pharmacy hired employees to register community members for testing.

“We told our employees, ‘Hey, this platform was meant for somebody who’s young, tech-savvy, knows how to maneuver the internet. But people in our community may not be able to do that. So help them,’ ” Zaibak said.

“We’ve had slow days when we just vaccinated 50 or 60 people, and we’ve had some really, really busy days that we were getting close to 1,000 a day,” Zaibak said.

Zaibak said Hayat has administered more doses than the state expected it would, and the pharmacies have not wasted doses. If extra doses remain near the end of the day, staffers immediately call eligible people waiting on Hayat’s standby list.

Davis, the Milwaukee widow, looks forward to completing vaccinations for her family. She looks forward to going outside more often with her children and friends and breathing fresh air. Her daughter works 15 hours a week at Goodwill. Davis hopes the vaccine will provide enough protection for her son to start working part-time again.

But first, they need a second round of doses, and they have yet to schedule those appointments. The Davis family initially received the Moderna vaccine, and the company recommends waiting a month between doses.

As that date approaches, Davis is again hunting for appointments.