Witherspoon finally gets his wish, finds his way to Seahawks 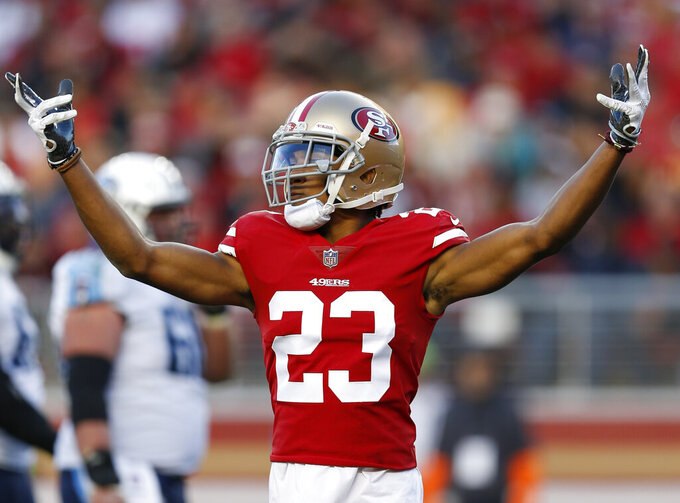 FILE - In this Sunday, Dec. 17, 2017 file photo, San Francisco 49ers cornerback Ahkello Witherspoon (23) signals during the second half of an NFL football game against the Tennessee Titans in Santa Clara, Calif. Back in college, Ahkello Witherspoon wanted to find a way to have an NFL career in Seattle. It took several seasons and starting his career in San Francisco, but Witherspoon finally got his wish this offseason when he signed a one-year contract with the Seahawks. (AP Photo/D. Ross Cameron, File)

RENTON, Wash. (AP) — When he was in college, Ahkello Witherspoon wanted to have an NFL career in Seattle.

Many college defensive backs felt the same way at that time since the Seahawks' defense was at the pinnacle of the NFL during that period, anchored by a legendary secondary.

“I think that group did it better than any, and that’s one of the reasons I was so interested in coming to Seattle out of college,” Witherspoon said Thursday. “If you asked me where I wanted to go, it was Seattle, just to kind of replicate that to the best of my ability.”

It took several seasons and a stint in San Francisco, but Witherspoon finally got his wish when he signed a one-year contract with the Seahawks this offseason.

Following the departures of Shaquill Griffin and Quinton Dunbar in free agency, the expectation is that Witherspoon will win one of the starting jobs. He’ll have competition from last year’s breakout revelation, D.J. Reed, as well as veteran Tre Flowers and draft pick Tre Brown.

But Witherspoon was one of Seattle’s priorities in free agency and it wasn’t for him to be a reserve.

“We’ve seen the style of play that he brings,” coach Pete Carroll said. “He’s got the makeup, speed, size, length, the kind of stuff that we like in our guys. I’ve had my eye on him since we first saw him coming out of Colorado.”

The Niners picked Witherspoon in the third round of the 2017 draft and he showed flashes as a rookie while starting nine games on a team that struggled defensively.

He had an inconsistent second season when he allowed seven TD passes in coverage, according to game-tracking data from SportsInfo Solutions, but still began the 2019 season as the starter.

Witherspoon injured his foot early that season and struggled when he returned, allowing seven more TD passes, according to SIS. He was eventually benched for Emmanuel Moseley before San Francisco went on a playoff run that ended with a Super Bowl loss to Kansas City.

Witherspoon played better in 2020 when healthy but the Niners didn’t make a strong effort to keep him after agreeing to deals with cornerbacks Jason Verrett and Moseley.

Witherspoon has four interceptions and 24 passes defensed in 47 career games, and said the injuries in San Francisco led to his inconsistent play.

Witherspoon is one of the few veterans at the Seahawks facility for offseason workouts. The majority are staying away during the early parts of the offseason program. Carroll estimated about 35 or 40 players are in attendance, most of them rookies or young players.

Witherspoon said he is showing up to rehab a minor offseason knee surgery, to get to know some of his new coaches and how they see the game.

“Stuff like that is stuff that you can’t make up or can’t get it when you’re at home just being on Zoom,” Witherspoon said. “So it’s been very helpful and I’m glad that I made that decision because I’m already reaping the benefits.”

NOTES: Carroll said he expects the veterans' in-person participation to pick up as the offseason workouts continue into June and that most should be in attendance for the mandatory minicamp in mid-June. “We’re communicating on a good level about it so it hasn’t been a negotiation. It’s been a conversation about it and we’re kind of partnering in this thing to put it together so we can get what we need to get done,” Carroll said. ... Carroll said he continues to have conversations with players who have yet to receive COVID-19 vaccines. “I made a pitch again today to our guys so they’re aware that the timeframe that’s left in the summertime before camp starts, ideally we’d like everybody to be vaccinated before we report to camp just to make it as safe as possible for everyone,” he said.