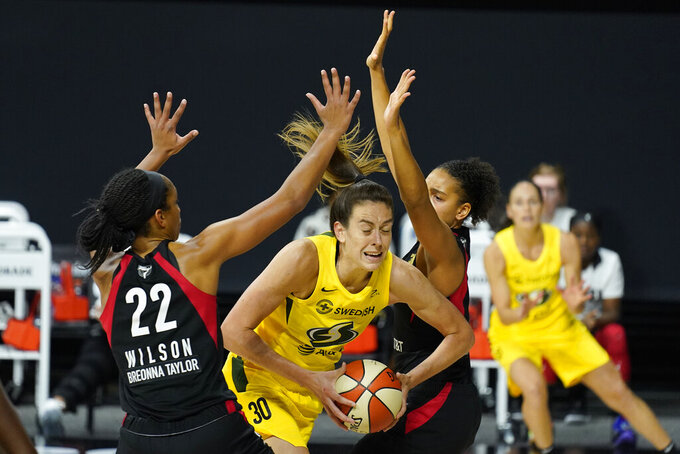 FILE - Seattle Storm forward Breanna Stewart (30) gets between Las Vegas Aces center A'ja Wilson (22) and forward Cierra Burdick (11) during the second half of Game 3 of basketball's WNBA Finals in Bradenton, Fla., in this Tuesday, Oct. 6, 2020, file photo. The WNBA will tip off its 25th season on Friday, May 14, 2021. (AP Photo/Chris O'Meara)

NEW YORK (AP) — The WNBA will tip off its 25th season on Friday after an eventful offseason that was full of player movement, including Candace Parker returning home to Chicago.

The former league MVP headed home after playing her entire 13-year career in Los Angeles since being drafted by the Sparks in 2008.

“I’m so excited to be home and I say that from the bottom of my heart,” Parker said. “I didn’t realize how amazing the Chicagoland area was with basketball in general until I went out in the world and I saw how truly special and how they really embrace their homegrown talent.”

The 12 teams were also heading home this season after playing last year in a bubble in Florida because of the coronavirus pandemic. While attendance will be limited, teams will play in their home markets.

“We’re working with the players' association and teams to create a plan to safely conduct our season amid this pandemic," WNBA Commissioner Cathy Engelbert said. "We’re excited about the ability to return to our home markets, so we’ll be in our 12 arenas. But we know we need to stay vigilant to minimize risk as much as possible.”

The defending champion Seattle Storm, led by Sue Bird and Breanna Stewart, won't be playing at their home arena, which is undergoing renovations this summer, instead competing at the Angel of the Winds Arena in Everett, Washington. The Storm played seven games there in 2019, going 6-1.

They'll open their season on Saturday in a Finals rematch against the Las Vegas Aces.

The Aces also made a huge move in the offseason signing free agent point guard Chelsea Gray. Reigning league MVP A'ja Wilson will be the only starter returning from last season's Finals run. Liz Cambage is back after being medically excused from last season because of the COVID-19 pandemic. Kelsey Plum is healthy after tearing her Achilles tendon before the start of last season.

Las Vegas did lose Angel McCoughtry for the season this week after she tore her right ACL. The Aces also saw guard Kayla McBride sign with Minnesota. The Lynx also picked up Natalie Achonwa and Aerial Powers in other key offseason moves.

Here are other things to look for in the league's 25th season.

It was also a busy offseason with two teams sold to new ownership groups. Former Atlanta Dream guard Renee Montgomery made history as part of a three-member investor group that was approved to purchase the team.

The ownership change follows pressure on former Sen. Kelly Loeffler, a Republican who angered WNBA players with her opposition to the league’s racial justice initiatives, to sell her share of the Dream. The Las Vegas Aces were also sold to Raiders owner Mark Davis from MGM International.

The league also plans to continue to support the WNBA Justice Movement. It’s the platform through which the league will continue to lead important work in the community to combat racial and gender inequality, promote advocacy for LBGTQ+ rights, and champion reform in systems where injustice persists.

The league will also debut the WNBA Commissioner's Cup. Teams will play 10 designated regular-season matchups before the Olympic break that will count towards standings for that contest. The top team by record in those games in each conference will play each other in a championship game right after the break ends. There will be player prize pools.

Both Dallas and Atlanta will have new coaches at the helm with Vickie Johnson taking over the Wings and Mike Petersen in charge of the Dream. Johnson was hired in December while Petersen was named the interim coach when Nicki Collen left for Baylor earlier this month.

The WNBA will unveil over the course of the season the league’s 25 greatest moments, 25 game-changing players and other things to commemorate its 25th anniversary.