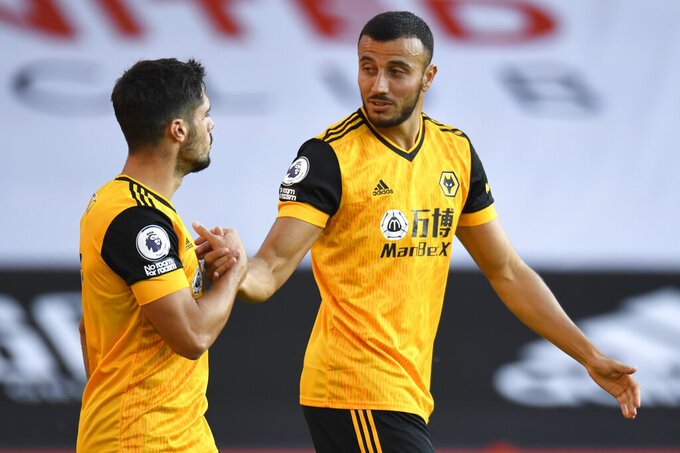 SHEFFIELD, England (AP) — Wolverhampton showed no sign of fatigue after its short offseason by scoring twice in the first six minutes to set up a 2-0 win at Sheffield United in their English Premier League opener on Monday.

Raul Jimenez, who scored 17 times in the league last season, sidefooted home a powerful shot from Daniel Podence's cross to put Wolves ahead in the third minute.

Wolves' 2019-20 campaign lasted more than a year because it started early in Europa League qualifying and finished in the same pandemic-extended competition with a loss to Sevilla in the quarterfinals on Aug. 11.

Back in action in little over a month, Nuno Espirito Santo's team looked lively and could easily have won by more. Saiss, a center back, nearly wound up with two goals after striking the post with a shot on the counterattack.

Wolves gave debuts to two offseason signings — Marcal, who started at left wing back, and Vitinha, who came on as a late substitute in midfield.

Sheffield United, which surprised many by challenging for the European places last season before fading in the final weeks, came closest when midfielder John Fleck drove an effort against the post early in the second half. Saiss also cleared a header from Oli McBurnie off the line in stoppage time.