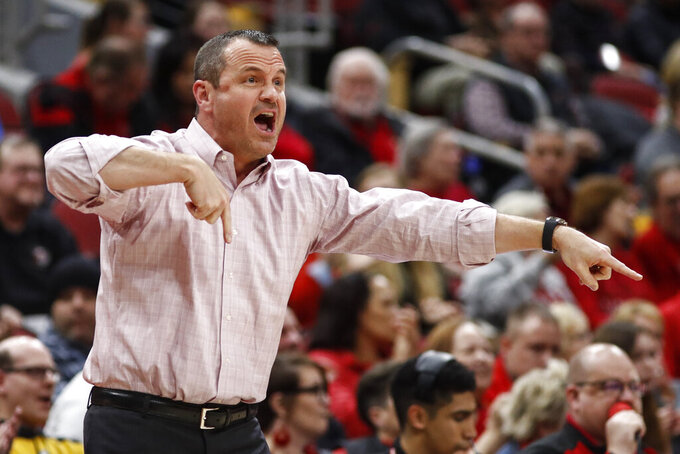 FILE - In this Feb. 27, 2020, file photo, Louisville coach Jeff Walz yells to players during the first half of the team's NCAA college basketball game against Boston College in Louisville, Ky. Walz knows that games will be lost at the last minute this season because of the coronavirus. So he set up a group text with fellow coaches at about a dozen schools that are within driving distance. The premise is that if a team loses a game late, they have a quick way to see if someone else needed a game. (AP Photo/Wade Payne, File)

Louisville women's basketball coach Jeff Walz knows it's likely games will be scrapped at the last minute this season because of the coronavirus.

So he set up a group text with fellow coaches at about a dozen schools within driving distance. The idea is, if a game gets canceled late, they have a quick way to find out if someone else can play instead.

If that seems chaotic and haphazard, welcome to the 2020-21 college basketball season. With a week until tipoff, some teams have no more than a handful of games scheduled and others are lining up bus rides and home-and-home series like they’re in baseball’s minor leagues.

“As soon as you found out that a game is canceled, you ask: Does anyone need a game?” he said. “We kind of all talked and except for a few teams within the same league — Ohio State, Indiana and Purdue — we’ve all agreed that if we have an opening we’ll play. We’ll figure it out if it’s home or away, things like that.”

Walz said he got the idea from a friend of his, Scott Davenport, who is the men's basketball coach at Bellarmine.

“My thought was that we have to do everything we can as coaches to provide as many safe opportunities to play as we can,” Walz said. “It’s been one hell of a 2020. I don’t see it getting any better at the start of 2021. The responsible thing to do is to try and exhaust all resources we might have to give these student-athletes a chance to play.”

Nearly two dozen schools have posted over the last week looking for games on a scheduling board on Basketball Travelers' website.

Arizona coach Adia Barnes took it a step further, reaching out on Twitter to try and find games.

“Just last week we lost two games, and the challenging part is navigating different conferences and their travel bans,” Barnes said. “When you're a coach and have to resort to Twitter to find games, it's comical. We still have two games to fill and eight days before opening up. Those are the times we're in.”

It's not just the non-conference games that have forced creativity in scheduling. Many conferences have changed their formats in scheduling to try and make playing safer and more likely to happen. Leagues, like the Metro Atlantic Athletic Conference, have changed to playing the same team twice at home in a given weekend. It was the fourth iteration of their conference schedule.

“As we learned more about the virus and transmission of it, it made more sense to condense travel,” MAAC Commissioner Rich Ensor said. “We're playing Friday and Saturday at the same site mostly to make it easier with testing. We spent a lot of time on the schedule.”

The Patriot League has changed to a three-division format this season with teams playing four games against each regional opponent starting in January. Additional league games will be played outside the mini-conferences to complete the 16-game regular-season schedule. The difference between the Patriot League and other conferences is that the teams will play a home-and-home set each weekend, driving back and forth between campuses. While that's not too bad for some schools, it sets up potentially long bus trips on game day for Army, Holy Cross, Boston University and Colgate.

“Our presidents felt like reducing travel and eliminating overnights to the extent possible is the best way for us to proceed,” Patriot League Commissioner Jennifer Heppel said. “That’s why you see some of the home-and-homes. We just need to keep an eye in so many areas over the next two months. When we play in January, there could be future changes. This was the model."

Heppel said the conference went from about 70 overnight trips last year to 10 this season.

“The travel we used was about a 200-mile one-way guideline to say that is acceptable for a one-day trip,” she said. “What’s great is it’s pretty easy to adapt. It's not only the pandemic, but also weather. We adapt for weather for the basketball season all the time. If it’s not safe to leave, you stay, you might look into coming in a day early.”

Patriot League schools are only playing conference games this season, with the exception of Army and Navy. The service academies were granted an exemption — their players can't stick around for an extra year of eligibility that was granted by the NCAA because they have military commitments.

“The academies have different missions," Army coach Dave Magarity said. “It's great that the presidents understand that we're in a unique situation and that our kids aren't permitted to redshirt.”