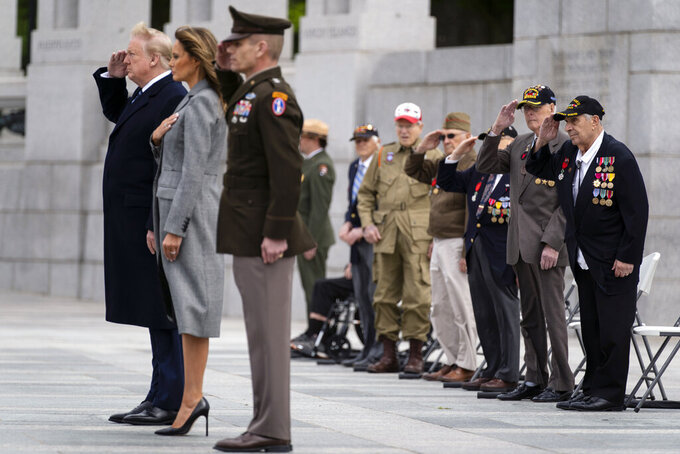 World War II veterans salute as Taps is played during a ceremony at the World War II Memorial to commemorate the 75th anniversary of Victory in Europe Day with President Donald Trump and first lady Melania Trump, Friday, May 8, 2020, in Washington. (AP Photo/Evan Vucci)

WASHINGTON (AP) — They stormed French beaches on D-Day, helped liberate a concentration camp and fought in the Battle of the Bulge. And seven elderly World War II veterans weren't about to let the coronavirus pandemic keep them from marking the 75th anniversary of the end of the war in Europe.

Ranging in age from 96 to 100, the veterans held their salute as President Donald Trump joined them in a commemoration at the World War II Memorial on a blustery Friday morning.

Steven Melnikoff, now 100, was an infantryman whose Army unit was responsible for capturing more than 10,000 German soldiers.

“It was a tough battle,” Melnikoff, who lives near Baltimore, said by telephone after Friday's ceremony. Speaking of his unit, he said: “I was with them constantly for 11 months, except the weeks and months that I spent in the hospital.” He had been shot in the neck.

Melnikoff said he wasn't worried about traveling from Maryland during the pandemic to pay his respects to all who were lost in the war, “that greatest generation.”

“We used proper protection,” he said.

Trump kept his distance as he walked by the veterans, including one in a wheelchair, who had lined up to greet him. Melnikoff said he previously had met Trump at the White House.

“I just said, ‘Nice to see you again, Mr. President,’ and he acknowledged that,” Melnikoff said.

The president and first lady Melania Trump participated in a wreath-laying ceremony and toured the memorial. They paused in front of a wall of stars with the phrase “Here we mark the price of freedom,” before they returned to the White House.

Trump said the commemoration was “windy and beautiful.”

White House officials had described the veterans as “choosing nation over self" by deciding to join Trump at the ceremony.

“These heroes are living testaments to the American spirit of perseverance and victory, especially in the midst of dark days," said White House spokesman Judd Deere.

Timothy Davis, director of the Greatest Generations Foundation, which helps veterans return to the countries where they fought, said the U.S. soldiers were originally scheduled to travel to Moscow for a commemoration event. But with international travel out of the question during the pandemic, Davis said they talked to him about trying to commemorate the day in Washington.

“Of course, we presented to them the risk we are facing,” Davis said. “They said, ‘It doesn’t matter, Tim,’” and asked him to press ahead, saying they viewed the commemoration as “a blessing to all who fought, died and served in World War II.”

Other veterans joining Trump were Gregory Melikian, 97, of Phoenix, who sent the coded message to the world that the Germans had unconditionally surrendered.

Donald Halverson, 97, of Minnesota, saw some of the war's fiercest fighting in Italy. John Coates, 96, of Maryland, fought in the Battle of the Bulge. Jack Myers, 97, of Hagerstown, Maryland, was part of a unit that liberated the Dachau concentration camp.

Melnikoff; Guy Whidden, 97, of Braddock Heights, Maryland; and Harold Angle, 97, of Chambersburg, Pennsylvania, participated in the D-Day invasion that turned the tide in the war.

Melnikoff described himself as striving toward new goals, including golf.

“My mission now that I'm 100 years old is to make sure many young people know the story of what happened 75 years ago,” he said. “I want the people to remember so this would never happen again.”

He was also looking ahead to a golf game on Saturday. Melnikoff plays three times a week and, according to background provided by the White House, is scheduled to set a world record in the summer as the oldest golfer to play on a course in Scotland.

“Golf is the greatest game, and you can play it till you're 100 years old,” Melnikoff said.