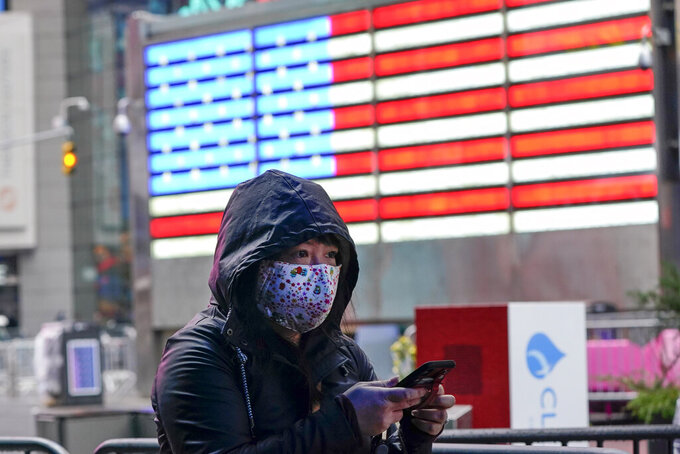 ALBANY, N.Y. (AP) — In an effort to speed up what has been a sluggish rollout of the coronavirus vaccine, New York's governor threatened Monday to fine hospitals up to $100,000 if they don't finish their first round of inoculations by the end of the week.

Gov. Andrew Cuomo made the threat hours before announcing the discovery of the state's first known case of a new, more contagious variant of the virus.

A man in his 60s who works at a jewelry store in Saratoga Springs tested positive for the variant, the governor said. The man has COVID-19 symptoms but is “on the mend,” Cuomo said.

The discovery underscored the need for more urgency in a vaccination campaign that has, so far, moved at a snail's pace.

Hospitals have been receiving vaccines over the past three weeks as part of a program prioritizing frontline medical workers. But Cuomo said that as of early Monday, hospitals had only administered the first dose of 46% of their allocated vaccines.

The Democrat blamed bureaucracy as the chief reason for delays, at public hospitals in particular.

The governor also threatened to stop sending the vaccine to hospitals that don't use their share promptly.

About 2.1 million New Yorkers are now eligible for vaccination under the state’s priority list, which expanded this week to include all health care staff — including receptionists — who come into contact with the public.

Nationwide, the vaccine roll-out has been stymied by logistical hurdles, confusion over who can get a shot and a slowdown in inoculations over the winter holidays.

Hospitalizations in New York have doubled since early December to 8,251 as of Sunday. The state is averaging 13,687 daily new cases over the past seven days, up 27% from a week ago.

Cuomo said he's spoken to leaders of dozens of hospitals and that New York's delay isn't due to refrigeration and storage issues or hospitals trying to limit vaccines only to eligible and willing health care workers. He said hospitals going forward must use all vaccine shipments within seven day of receiving them.

“This is a matter of life and death, so yes I’m impatient,” said Cuomo, who's also threatened heavy fines for health care providers fraudulently receiving or administering vaccines.

Cuomo said the federal program to vaccinate nursing home residents and staff is also going too slowly — with only 47% of nursing homes having completed their first round of doses for residents.

Leaders of health care industry groups said hospitals will do everything they can to boost vaccinations.

“There will always be bumps in a plan this huge and complex, but we’re working through them in real time and keeping the rollout on track,” said Brian Conway, spokesperson at the Greater New York Hospital Association, which represents more than 160 hospitals and health systems.

Bea Grause, president of the Healthcare Association of New York, said hospitals are “going above and beyond managing an increase in COVID-19 hospitalizations and this unprecedented vaccination effort.”

Cuomo said the state will launch drive-thrus and use field hospitals and convention centers to boost vaccinations as the state opens up its priority list in coming weeks.

The state has run about 5,000 tests so far for the variant, which Cuomo said he suspected was already more widespread than people realize.

Three other people linked to the Saratoga Springs jewelry store have tested positive for COVID-19, but Cuomo said it’s unknown if they have the variant. Anyone who was in the store from Dec. 18 through Dec. 24 is urged to get tested.

In its bid to step up inoculations, New York City will set up 250 city-run COVID-19 vaccination sites at schools and other locations this month and expand the hours that vaccines are provided, Mayor Bill de Blasio said Monday.

Just over 110,000 people have been vaccinated in the city since inoculations, but de Blasio predicted immunizations will speed up in weeks ahead.

De Blasio initially said 1 million people would be vaccinated in January when he first announced his million-vaccination goal last week. Reaching that target would require 2 million doses, since both the Pfizer and Moderna vaccines require two doses a few weeks apart to be fully effective.

On Monday, however, de Blasio offered a much more modest projection, saying the goal was 1 million doses, not 1 million people vaccinated.