WTO to intensify talks on easing access to COVID-19 vaccines 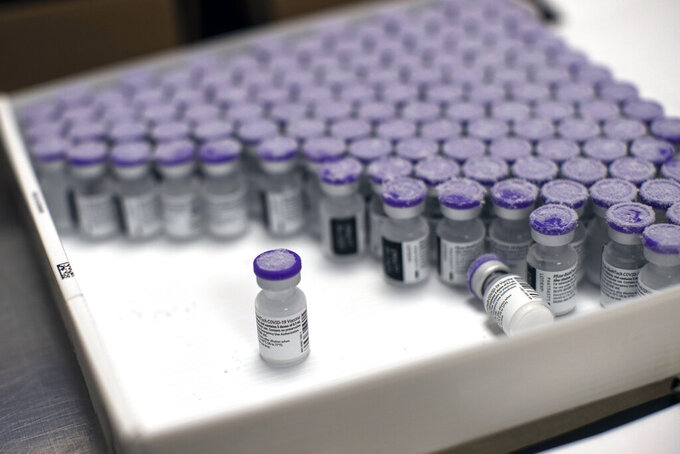 FILE - In this Monday, Jan. 4, 2021 file photo, frozen vials of the Pfizer/BioNTech COVID-19 vaccine are taken out to thaw, at the MontLegia CHC hospital in Liege, Belgium. Envoys from World Trade Organization member nations are taking up a proposal to ease patents and other intellectual property protections for COVID-19 vaccines to help developing countries fight the pandemic, an idea backed by the Biden administration but opposed in other wealthy countries with strong pharmaceutical industries. On the table for a two-day meeting of a WTO panel opening Tuesday June 8, 2021, is a revised proposal presented by India and South Africa for a temporary IP waiver on coronavirus vaccines. (AP Photo/Francisco Seco, File)

A WTO panel focusing on intellectual property, which includes patents on technological know-how like vaccines and the processes to manufacture them, wrapped up a two-day meeting on Wednesday with an agreement to start a “text-based process” for pulling together proposals to improve the fight against COVID-19 through the Geneva-based trade body's intricate system of rules.

The goal is to help jump-start lagging efforts to get vaccines to developing-world countries that badly need them, according to a Geneva-based trade official, who spoke on condition of anonymity because he was not authorized to speak publicly on the matter.

New, informal talks will start next week among members of the panel, with an eye toward pulling together a report for a July 21-22 meeting of WTO ambassadors.

South Africa and India floated a proposal in the fall for a temporary easing of patent protections for COVID-19 vaccines, therapies and tests – known as an “IP waiver, While many developed countries with strong pharmaceutical industries hesitated or were outright opposed to the idea, the debate received a jolt last month when the Biden administration announced support for granting IP waivers for just vaccines.

Since Washington's change of stance, a number of other Western countries have softened their opposition to the the waivers, including Australia, Brazil, Canada, New Zealand and Norway, the trade official said, relaying information from deliberations in the closed-door WTO talks held Tuesday and Wednesday.

Those countries, as well as China, haven’t rallied fully behind the South African and Indian proposal, and view it as only part of what they think should be a more comprehensive approach to getting COVID-19 products to the developing world, the official said. Some countries, such as the European Union’s 27 members, Britain, Switzerland and Korea, continue to oppose waivers as a tool in the pandemic.

In the two days of talks, South Africa and India presented a recent revision of their proposal – now backed by over 60 countries – that stressed a temporary, three-year waiver for COVID-19 products, the official said.

Pharmaceutical companies insist that an IP waiver could dampen the incentive for researchers and entrepreneurs to innovate, and say vaccine-sharing by rich countries would be a much faster way to get shots to health workers and at-risk populations in the developing world.

Even optimistic supporters acknowledge an IP waiver could take months to finalize because of the resistance from some countries. WTO rules require consensus on such decisions, meaning a single country among the trade body's 164 members could scuttle any proposal. Even if a plan were adopted, ratification would also take time.

Advocacy groups, emboldened by the support the U.S. announced last month, have increasingly pushed the proposal from India and South Africa.

“After eight months of stalling and delaying by a handful of rich countries, world leaders have finally given the green light for negotiations to start. But the U.K. and EU are still opposing the proposal and pushing for business as usual," said Heidi Chow of British advocacy group Global Justice Now. “Countless numbers of people have needlessly died while waiting for a breakthrough in these discussions.”

The World Health Organization has repeatedly inveighed against unequal access to vaccines, noting that rich countries scooped up supplies well in excess of the need of their own populations while developing countries have obtained only a small fraction of the doses so far distributed and used worldwide.

Also Wednesday, a group of independent experts who work with the U.N. human rights office joined recent calls for leaders of the developed Group of Seven nations to do more to ensure that developing countries have greater access to COVID-19 vaccines. The leaders of the G-7 countries - Britain, Canada, France, Germany, Italy, Japan and the United States - are set to meet in England starting Friday.

The experts argued that an IP waiver would pave the way for countries to ramp up production because patent protections would be paused.

“Maximizing production of safe vaccines must take precedence over profiting from a global pandemic,” the nine experts said in a joint statement. “States must ensure that legal protection for intellectual property and patents doesn’t undermine the right of everyone to get access to a safe, timely and effective vaccine.”