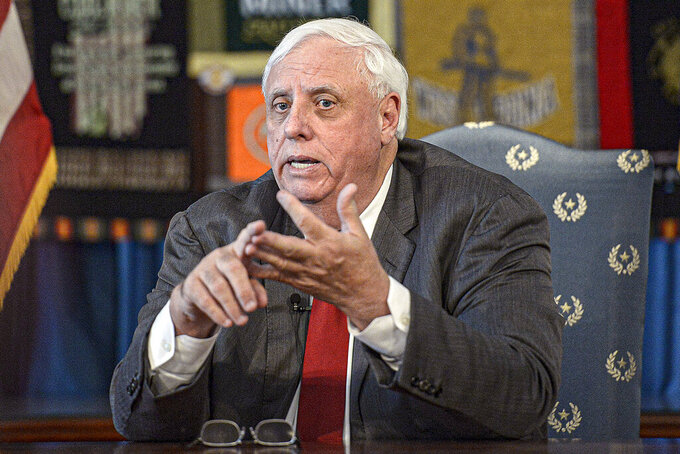 FILE - In this March 12, 2020, file photo, West Virginia Gov. Jim Justice speaks during a press conference at the State Capitol in Charleston, W.Va. Justice said Monday, June 22, 2020, that coronavirus cases are climbing across the state though he declined to strengthen restrictions as his reopening plan continues. The active caseload has increased by 28% over the past two weeks as outbreaks emerged at churches and after a number of West Virginians traveled to Myrtle Beach, South Carolina, according to state health officials. (F. Brian Ferguson/Charleston Gazette-Mail via AP, File)

CHARLESTON, W.Va. (AP) — West Virginia Gov. Jim Justice forced out the commissioner of his public health bureau on Wednesday, hours after he publicly questioned the accuracy of the state's coronavirus data and detailed growing outbreaks in about a dozen counties.

The abrupt resignation of Cathy Slemp, who was also a state health officer, came after the Republican governor vented during a news conference that West Virginia's active virus caseload may have been overstated.

“If we were on our game here, in DHHR and Dr. Slemp's office, if we're on our game and you're listening to the governor say that there's six active cases at Huttonsville and you're looking at the reports that you're putting together and sending them to me on active cases and your looking at Randolph County and they're reporting a hundred-and-some-odd cases then you're not doing your job,” Justice told reporters, without additional explanation.

In a statement Wednesday afternoon, the governor's office said Justice had expressed his “lack of confidence” in Slemp to Bill Crouch, secretary of the state health department, who then asked for Slemp's resignation. She resigned immediately, the statement said. In a separate statement, a spokeswoman for the health department said there were discrepancies related to virus caseload data at the Huttonsville Correctional Center in Randolph County.

Slemp, who was a regular feature of the governor's daily virus news conferences, has decades of public health experience. She was previously the acting state health officer and was the founding director of the state's public health emergency preparedness and response programs, according to a biography on the state health department website. Slemp is also on the board of scientific counselors at the federal Centers for Disease Control and Prevention.

Justice, a billionaire coal businessman without previous political experience, had showered Slemp with praise as he hosted press conferences during the outbreak, often stressing that his aggressive plan to lift virus restrictions was guided by his health experts. Slemp did not appear at Wednesday's news briefing.

In a resignation letter, provided by the state health department, Slemp urged officials to listen to science.

"I encourage all to stay true to the science, to further work to engage and empower communities to address such an unprecedented situation collectively, to meet people where they are and to move forward together," she wrote. “It is with mutual respect, support, a willingness to look at and understand both the science and the factors that drive them, and a dedication to moving forward together that will get the state through this together.”

The spikes come as states around the country report rises in cases, and as New York, New Jersey and Connecticut have announced they would be mandating a two-week quarantine for travelers from hotspot states.

The governor has so far declined to strengthen West Virginia's virus restrictions in response to the increases. He has repeatedly balked on mandating face masks in public spaces, as other governments have done, saying such an order would be politically divisive.

Instead, he has stressed that people should follow existing safety rules, encouraging people to get tested for the virus and to wear face masks. Justice has also asked that people avoid traveling to Myrtle Beach, which has seen cases rise in recent weeks, rather than ordering quarantines as people return from the popular resort city.

"I strongly, strongly would tell you that if you're thinking of going to Myrtle Beach, rethink what you're doing," he said, adding that he hopes he doesn't need to put restrictions on hotspot travel.

At least 92 people in West Virginia have died from the virus and around 2,600 have tested positive, according to state health data.