Yankees slugger Judge out of lineup for 2nd straight game 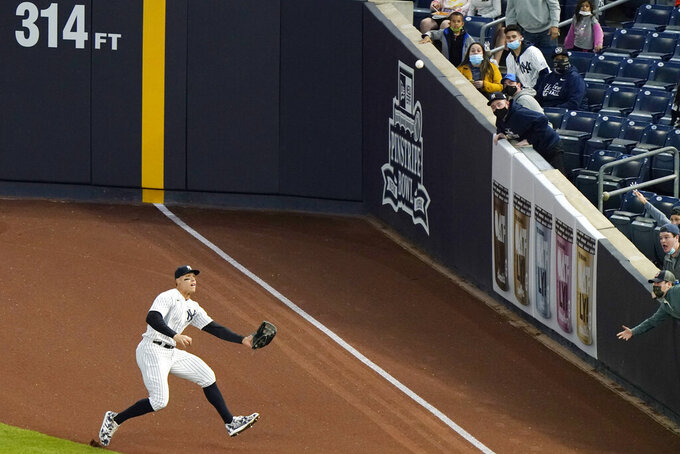 ST. PETERSBURG, Fla. (AP) — Yankees slugger Aaron Judge was held out of New York's lineup for the second straight game Friday with soreness in his left side.

The Yankees were also without third baseman Gio Urshela for the series opener after he was placed on the COVID-19 injured list due to side effects from a coronavirus vaccination.

Judge had a homer, three hits and four RBIs in a 7-2 win over Baltimore on Tuesday night but didn’t play in the Yankees’ 4-3, 11-inning loss on Wednesday. New York had Thursday off, but the right fielder still wasn't ready to return Friday.

Yankees manager Aaron Boone said Judge hit in the cage before Friday’s game against AL champion Tampa Bay and might be ready to return Saturday.

Judge has not undergone any tests for what Boone calls general soreness.

“I just felt like it was something I wanted to do, at least give another day, and we’ll see where we’re at in 24 hours,” Boone said. “It’s simply wanting to play the long game. These are things that you want to feel good about when you let it rip.”

When asked if the Yankees consider this an injury, Boone said he didn't know how to answer that.

“If I answer yes or no it's going to be conflated a lot of different ways,” Boone said. “So, I don't have him in the lineup today. I feel like he could probably play today. More evaluation in 24 hours.”

Judge, the 2017 AL Rookie of the Year, missed 142 games spanning 2018-20, going on the injured list at different points for a right wrist fracture, a left oblique strain and twice for right calf strains. He also broke a rib last March but was ready for opening day after the pandemic delayed the start of the season.

“It’s all baked in the cake,” Boone said. “Obviously there’s no secret how important he is to our club. Trying to weigh all those things into account.”

NOTES: INF Rougned Odor is undergoing intake testing and was not ready to join the team on Friday. He was acquired from Texas this week. ... LHP Justin Wilson (shoulder soreness) was activated from the injured list on Friday. ... With Urshela placed on the COVID injured list, INF Mike Fore was recalled from the alternate site.